On February 11th, Delaware Governor Jack Markell wrote a letter praising the efforts put forth by the members of the Wilmington Education Advisory Committee.

If you look at the links below the title on this blog, I’ve added a page to get all the pertinent links to parent opt out of the Smarter Balanced Assessment.  Everything you need, and more, will be in one spot.  If you have any links you would like me to add, please write a comment on this page.  Thank you!

In honor of President’s Day, I decided to reflect on some of the Presidents who played a significant role in improving the lives of children and adults with disabilities. Up until the 60s, most families were ashamed to admit that they had a child with a disability. President John F. Kennedy’s sister Rosemary, who had intellectual disabilities, served as an impetus for the President’s push to establish the President’s Panel on Mental Retardation in 1961. 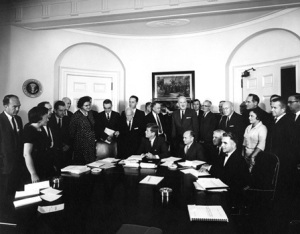 The President’s Panel on Mental Retardation, 1961

Comprised of 27 members, the panel reviewed the country’s current intellectual disabilities programs, eventually presenting the President with over 100 recommendations for the first comprehensive federal approach. Dr. Gertrude Barber, our founder, was a member of this panel.

A year later, President Kennedy signed the Maternal and Child Health and Mental Retardation Planning Amendment, which incorporated many of the panel’s recommendations and provided planning grants to enable states…

Yes, please sign any petition in opposition of high-stakes testing. It is your sacred duty on this planet in 2015!

Researchers organized by Kevin Kumashiro, Dean of the University of San Francisco School of Education, have created a petition to oppose high-stakes testing. It is addressed to Congress.

Read about it here in Valerie Strauss’s “Answer Sheet” and, if you agree, add your name.

Due to the accurate forecast for the snow, everything is closed today.  Except WaWa and a few stores.  Governor Markell even said the government offices are closed except for essential employees.  Go back to sleep, enjoy your day, get shoveling, or work from home.  I have plenty to do today, with the exception of going back to sleep.

Sounds to me like the band is channeling some mid 1980’s Outfield on that song!

Imagine Dragons has a new album coming out on February 24th called “Smoke And Mirrors”.  They have released three singles so far, “I Bet My Life”, “Gold” and “Shots”.   Two of them are great songs, but “Gold” doesn’t do it for me.

This band has come a long way since I saw them on a side stage at the Firefly Festival back in 2012.  Even though they only played about six songs, it was one of the best concerts I’ve ever seen.  Even though they have hit it big, they are still willing to experiment.  I can’t wait to hear what the rest of the album sounds like.

Back when I first started listening to them, I heard a rumor the name Imagine Dragons is an anagram.  When I found out what it actually means, I was somewhat shocked.  I won’t tell you what it is, but can you figure it out?

I can’t listen to “Demons” without thinking about the time my mom passed away.  I used to wonder what she would think of me when she did pass and she could see everything.  Sounds weird, but don’t we all wonder that sometimes when our loved ones pass away?

The first time I heard them was “It’s Time”.  I found a few more of their songs and liked what I heard.  They were the opening band on the first Saturday at the inaugural Firefly Festival.  I was within the first five rows, and the band started playing “Round And Round”.  “On Top of the World” got the crowd going.  They set the pace for everyone else to follow that day.  I know “Radioactive” is their biggest song, but they will be around for a long time.