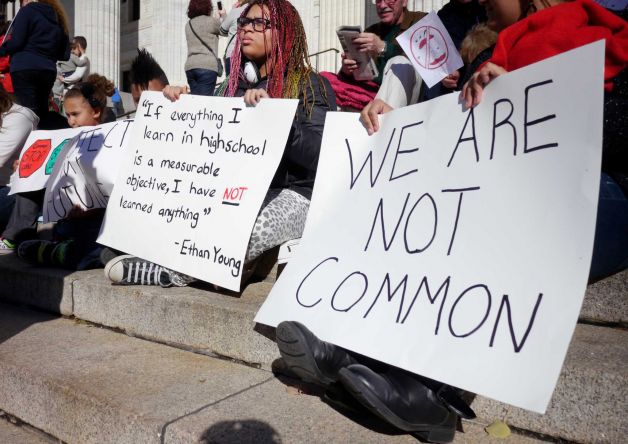 Child clinical psychologist presents how the Common Core Standards are developmentally inappropriate for young students at a conference held at Notre Dame in 2013.

Governor Herbert surprised a lot of people this week, including me.

After spending the past six years promoting,  marketing, and providing workforce alignment strategies to serve Common Core, and after rising to the throne of Common Core’s organization, National Governors Association, to become its chair, and after going out of his way to have the Utah Attorney General provide “proof” that Common Core supposedly represented local control– after all of this,  Herbert has now turned his back on the Common Core and has written a letter to the State School Board, asking it to move away from Common Core.

The media in Utah say that they are “puzzled” and confused.  Not me.  I’m doing the happy dance!

Regardless of the Governor’s motives in this election year, regardless of the possibility that Utah might just endure a wasteful rebranding effort that could redeliver Common Core under a new name…

The Wilmington Police Department, according to the News Journal, gave all the information and evidence on the death of Amy Joyner-Francis to the Delaware Department of Justice yesterday.

The DOJ could not provide a timeline for how soon charges will be filed but Kanefsky said Thursday that it will be prompt.

While Wilmington P.D. Chief Bobby Cummings indicated three girls will be charged in the brutal murder of Amy Joyner-Francis at Howard High School of Technology on April 21st, the exact nature of the charges will be determined by the Delaware DOJ:

…state prosecutors are reviewing evidence submitted by Wilmington Police Department to decide what charges can be lodged.

Last Sunday, a viewing was held for Amy with a packed church.  Delaware citizens, especially those in Wilmington, have been adamant that the guilty parties need to be charged so there can be justice for Amy and her family.  No charges or prison time for the guilty will take away the pain and sadness that Amy’s family and friends are feeling.  There is no replacement for a life.  Please continue to pray for those who loved Amy and miss her dearly.