I had an email forwarded to me this evening concerning an incident at Newark Charter School earlier this week.  While checking to see if something happened, I found the News Journal already covered this.  But what the News Journal didn’t publish was the email Newark Charter School’s Greg Meece sent to the parents about the altercation between a teacher and a student.  You can see that below.  But I have several dozen questions about this incident which didn’t even come up in the article.  While I respect the fact that Meece can’t talk about the incident because it involves an employee, the comments on the News Journal article spin many different tales…

He said the incident was in a classroom earlier this week and involved a female high school student and teacher in a physical altercation over a cell phone.  He added the cell phone did not belong to the student.  Meece said neither was at school Friday, but no formal disciplinary action has been taken at this time.

This is the definition of a physical altercation, with certain words bolded for emphasis:

A peaceful gathering?  Maybe for the students, but according to this commenter on Facebook, the school wasn’t too happy about it… 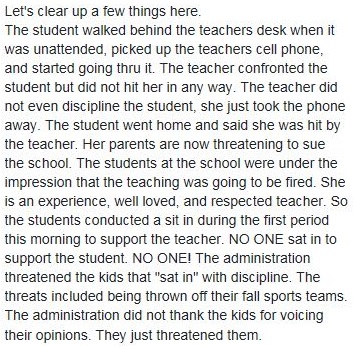 That is a very different yarn than the one spun by Greg Meece in his email to the parents and the News Journal:

“The principal of our building spoke to the students and thanked them for their voices and being heard,” Meece said.

What happens at Newark Charter Schools stays at Newark Charter School… until a student and a teacher have a physical altercation that is.  I don’t know why Newark Charter School treats itself like it is an isolated school cut off from the rest of the state.  How much goes on there that the public has no clue about?  If someone didn’t tip off the News Journal or myself on this, who would have known?  But we see teachers getting arrested in Delaware.  For more egregious things than this, but it happens.  Perhaps the teacher was defending herself.  But according to the above commenter, it was all a lie.  If there was any physical force involved, were the police notified?  The Senate Bill which minimizes when the police are called, Senate Bill 207, passed in the Delaware General Assembly this year, but it was very specific in its language to specify “between students”.  It did not mention staff members.  Which means Newark Charter School, if they did not notify the police, may have broken the law.  Whether it was a student or a teacher, if the matter became physical, they are legally obligated to do so.  Why didn’t the News Journal question that aspect of the story?

Scandals?  Sweeping things under the rug?  I thought NCS was this model of good behavior and nothing happened there…

It is hard to believe this particular commenter in one aspect.  If this happened Monday, there is no possible way the parents could have sued the teacher in four days.  They may have talked to an attorney, but nothing moves that fast.  But they are absolutely right that students should have a voice.  The threats coming out of the administration when students were having a peaceful sit-in could have been treated with more respect if the above commenter’s comments are true.

What does Newark Charter School’s code of conduct say about this kind of incident?  It doesn’t reference this specific type of situation, but it does say this:

But they do reference House Bill 322, which the Delaware General Assembly passed in 1997:

In addition to any action taken by school officials, the school will comply with the notification requirements of H.B. 322 which includes notification of police.

This was in a section that talked about fighting.  I hate to keep beating on the same drum, but if this was an incident that was so minor, why would Meece refer to it as a “physical altercation” which has a very definitive legal meaning?

Are parents allowed to discuss this incident?  On the closed to members only NCS Parents Facebook page, it was a huge topic of discussion this week until the moderator deleted all the comments about it to protect the identity of the student and the teacher.  Even though all the parents already knew about it.  This was reported to me by a few parents of students who belong to that page.

Newark Charter School needs to be more open and honest with parents about situations, instead of putting on an “everything’s fine” face with the News Journal.  There was a lot Meece could have talked about with this article, but I’ve always been told Meece is a very smart man and chooses his words very carefully.  But no public school receiving taxpayer dollars should think they can isolate themselves from transparency.  They aren’t North Korea.

I’ve heard of many teachers at NCS getting fired with no form of due process whatsoever.  Delaware charter schools do not have teacher unions which, in this case, would have given the teacher protection if they were fired over this.  But we will most likely never know because of the isolationist mindset coming from this school…