Hope For Our Students had a brilliant comment on Part 1 of The Wolf of Delaware that I thought deserved it’s own post.  This is what Hope wrote:

“Globalization of the world market” translates to the U.S. invitation to join the Organsation of Economical Cooperation and Development (OECD) which today has 34 country-members (the United Nations has 193); so hardly a global market. The percentage of <18% may seem small, but *”OECD member countries account for 63 percent of world GDP, three-quarters of world trade, 95 percent of world official development assistance, over half of the world’s energy consumption…”

The rest of the summary is a corporate sales pitch using inaccurate PISA comparative test data to influence education policy makers of the need for education reform. This sales pitch has been regurgitated by education reformers ever since. Today, we know the data in the original reports was inaccurate for many, many reasons. Most importantly, the OECD recanted it’s original claim that poorly performing teachers and low standards were the most likely reason for poor performance of students in the United States. In 2013, the OECD issued this statement, “We know the best way to improve test scores is to lower child poverty rates and build a sense of “community” within a country’s citizenry”,

As far as the “Wolf” is concerned, he believed the sales pitch and bought the elixir from the traveling salesman like many, many others did at the time (within both parties). The problem is, he is still swearing by the product which he now knows was a hoax and it makes him look more foolish than ever. The question is, when did he stop being a victim of false advertising and perpetrator of the swindle on Delaware families? I am hopeful, The Wolf Part 2 will answer that question.

I am very much inclined to agree with Hope in just about everything they wrote, with one major exception.  I do not think the Wolf was a victim of false advertising.  I think he was very much aware all along of the sales pitch.  Let’s not forget, Tough Choices was released in 2007.  The Wolf and his buddy over at Rodel were knee-deep in education reform two years earlier.  But I think the roots of this began before that.  He was just positioning himself to be at the right place at the right time when it did come around in full swing.  More on that later… 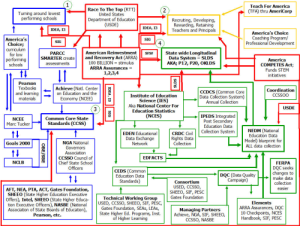 The Wolf of Delaware comes across as a sheep to his most loyal followers.  They believe he is always right and they will do anything he wants.  Some of these followers can be found in the highest positions at Legislative Hall in Dover.  Many of them can be found at the Townshend Building, home to the Delaware Department of Education.  His people have been placed in important positions all over the state.

To understand the Wolf, you have to read the below document.  While reading it, keep in mind everything that has happened in Delaware education over the past ten years.  Please keep the Wolf in the forefront of your brain while reading and you can almost picture him reading it to you as so many of his speeches and actions have stemmed from this one body of work.

The Wolf of Delaware was born in the First State in 1960 as the son of William and Elaine Markell.  Jack spent his formative years growing up in Newark, Delaware.  As early as Kindergarten, young Jack met a girl who would have a profound effect on his life and would eventually become Delaware First Lady Carla  Markell.  During his youth, Jack Markell attended a summer camp called Camp Galil.

Graduating from Newark High School in the Class of ’78, he next week to college at Brown University in Rhode Island with degrees in economics and development studies.  But it was his time in Chicago that shaped Jack Markell into the man he is today.  The Wolf got his M.B.A. at University of Chicago, and he started working in 1982 at First Chicago Corporation as a banker.  It was his time as a consultant at McKinsey and Associates from 1986 to 1989 that most Delawareans know about during his stint in Chicago.  To this day, Markell brings McKinsey in as a consultant on a variety of Delaware issues and initiatives.

His biggest corporate position was from 1989 to 1995 at a company originally called Fleet Call.  As a Senior Vice-President at Nextel, Markell actually came up with the company name, Nextel.  Markell was in on the ground floor as wireless technology exploded across America in the early 1990s.  Markell left Nextel to become a senior manager at Comcast, but he had his eye on politics, and he ran for Delaware State Treasurer in 1998 and won on the Democrat ticket.

The Wolf’s story will continue as his election results in 1998 set up his future in Delaware all the way to the present.  Unfortunately, it set up our future, and more importantly, our children’s future…

*The above document was written by Marc Tucker with NCEE

**The above graphic was originally on http://www.utahsrepublic.org/wp-content/uploads/2011/07/Common-Core-State-Standards-and-Race-to-the-Top-An-Introduction-to-Marxism-101.pdf

I’m going to be doing a story on one individual in Delaware who has done many terrible things.  For those who have been following this blog, I’m sure many of you know who it probably is, but you will know for sure when Part 1 comes up either today or tomorrow.  In the meantime, this may whet your appetite…