After weeks of work, all of the Delaware Public Education salaries over $100,000 have been posted with a few exceptions.  Those are four charter schools who either did not respond or will in the next couple of days.  But there is more than enough data to make some sense out of all this.  Many asked why I was posting these.  There were several reasons: requests, comparisons, money tracking, and general curiosity.  But the main reason was to see if I could answer the age-old question- “Are there too many administrators?”  Finally, I am prepared to answer that. END_OF_DOCUMENT_TOKEN_TO_BE_REPLACED

Does Publius believe in vouchers? I would say he does based on this comment over on Kilroy’s Delaware from last year.

While not coming out and supporting vouchers wholesale, Publius was promoting a credit or rebate to taxpayers for kids in private schools.  Why?  To reduce the tuition for parents.  A voucher is a voucher no matter how many different ways you try to shape it Publius.  You put a pig in crap it is still going to get filthy no matter how you do it.  That reminds me… how do our school board candidates feel about vouchers?

New details emerged in the never-ending Christina-Delaware Department of Education-15 Charter Schools lawsuit/settlement thanks to Newark Charter School leader Greg Meece.  I guess now that the ink is dry on the settlement, people can say whatever they want, right Greg?  We shall see!

Follow-up on the settlement letter

This will provide additional information and clarification about the recent settlement of the lawsuit filed by NCS and 14 other charter schools over what we considered to be funding errors which cost charter schools – and their students – a fair amount over the years. Because we are satisfied with the agreement reached over local funds and pleased with the new level of transparency created by the agreement, we are happy to offer the following clarifications:

– We stated that the general idea is that the property taxes paid by residents, which are initially held by the local school districts, should follow the child when families choose to enroll their children to a public charter or choice school in Delaware. We believe that, for whatever reasons, in the case of Christina School District (CSD) that was not being done. But we also concede that, as in most settlements, the district admitted no wrongdoing.

– Finally, we said that “both CSD and DDOE agreed to cover the cost of the charter schools’ legal costs.” Let us clarify. In the complaint filed in court, we demanded an award of attorneys’ fees. During the negotiations, we pressed that same demand. The resulting agreement, while not mentioning the subject of attorneys’ fees, provides for a one-time payment of $150k from each defendant. Naturally, the plaintiffs are free to spend that one-time payment as they see fit and have decided to pay their legal fees with it, and we have been told that both DDOE and CSD are paying that amount directly to the charter schools’ attorneys. We are told, in CSD’s case, that payment is funded from “true-up” funds created by a switch in the method of calculating the share going to charter schools.

We hope these clarifications resolve any confusion about the settlement and want to reiterate its essence: both sides agreed to a sharing of local revenues that each believes represents fair compromise and charters will now be given the information in coming years to assure that fairness continues. We are pleased that the Department and CSD have approved the settlement and look forward to working with each in the future.

Ah, Greg Meece, you are crafty.  That is for sure!  So if I understand this correctly (as well as the thousands of readers who are probably sitting with a dropped jaw right about now), Secretary Godowsky did NOT know about the changes to the local funding formula.  Which is one of his job duties, to approve that formula by September 1st.  But one could presume, if no changes were presented to him, there would be nothing to approve if the old formula was used.  So can someone please tell me why the 15 charters named Godowsky personally in the lawsuit if they knew he did nothing wrong?  And it’s not like this is new news.  State Rep. Earl Jaques confirmed this in an email I published three months ago.

Greg Meece, are you telling me your attorneys willfully put something in a lawsuit they KNEW wasn’t true?  Or was this oh-so-little detail discovered after the lawsuit was filed?  Either way, it would have come up before the settlement was written.  But the settlement specifically gives details about Godowsky back-tracking on his decision.  But it was never a decision he made to begin with.  So this ENTIRE mess went down because Delaware Dept. of Education officials neglected to give their State Cabinet-level superior information that IS IN STATE CODE and they only have to pay $150,000 to the charters for “whatever they choose but we planned it ahead of time to pay the attorney fees“.  This seems VERY convenient.  Too convenient.  If this is not the very definition of a shakedown, I don’t know what is.  Maybe Secretary Godowsky should sue the fifteen charter schools for a frivolous lawsuit.  And Bob Silber.  And the Christina School District.  The only way Meece can say this wasn’t Christina’s fault is because of the nature of settlements.  People try to tell me what a great guy Meece is.  I don’t see it.  Someone who is okay with playing games with tens of thousands of student lives, staff members, educators, and taxpaying citizens is not in my definition of a good guy.

So we have Greg Meece, the same guy who got this snowball rolling down the hill to begin with, openly admitting this was all the DOE’s fault, but he is glad Christina and the charters could come up with a mutual agreement?  Are you out of your damn mind Meece?  So why was Christina even named in the lawsuit to begin with if this was all a colossal screw-up by the DOE?  IF I were the attorney for this, the only legal option would be to go after the DOE.  UNLESS I was already planning on a settlement.  With some other easter eggs thrown in for good measure.  Things like the tuition and match taxes.  Opening the door for them.  Very smart.  Very shady.   Very Delaware.  And 4 out of 7 Christina board members fell for it.  For now.  There is still some information that hasn’t come out yet Greg.  But I know it.  And it will.  Good luck with THAT weekly bulletin Greg!  But I do want to thank you for reading my article I put out last Monday based on your last missive to the NCS parents.  Had I not put that article up, would you be bending over backwards trying to “clarify” things with NCS parents?  I tend to doubt it.

To read the FULL NCS Weekly Bulletin, and learn all about the have to see it to believe it “Hour Of Code”, see below.

Man, taxpayers are getting it this year.  Like Appoquinimink, Red Clay citizens are going to get another hit this year as their tax rate leaps up 2 cents to $2.174 per $100 of assessed value.  But if you look at the below pictures, it shows a bigger increase.  That is because their last referendum had different amounts that would change in the tax rate for the next couple years.  But unlike Appo, there tuition tax leapt up .02 cents as opposed to .06 cents.  Red Clay has a ton more students with disabilities, and yet their needs-based special education funding only went up $250,000 as opposed to Appo’s needed $815,000 for “increased special education cost”.  So Appo still  has some explaining to do (I am working on a follow-up article to explain this anomaly). 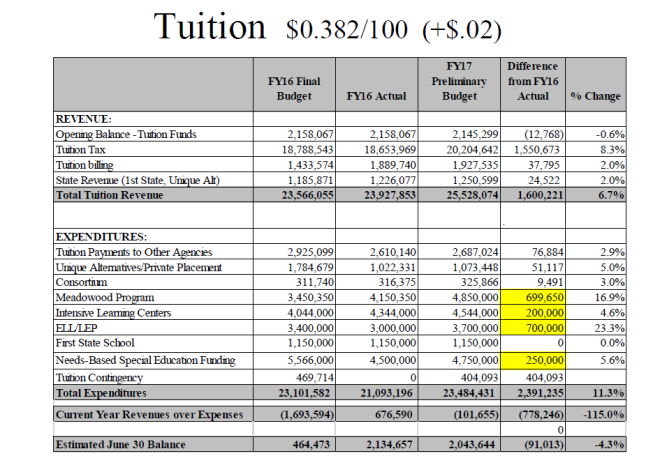 I just wrote about how the Christina School District is not backing up their promise to restore librarians cut last year.  But the district seems to have $200,000 to spare for a new assessment suite.  Last night, the Christina Board of Education approved a contract with Curriculum Associates for new district assessments to replace two other district assessments.  The contract would give the vendor $200,000, of which $181,200 would come out of local funds.  Local funds are what the district gets from the taxpayers.  Call me crazy, but I don’t remember seeing a new assessment package as part of the referendum promises.  In fact, the state has been actively pursuing an agenda where districts have less assessments (although the one assessment that needs to go, the Smarter Balanced Assessment, wasn’t even considered by the Delaware assessment inventory committee).  My question would be how valid are these new assessments compared to the two ones they are replacing, DIBELS and Amplify.  While I am certainly not a fan of either DIBELS or Amplify, I don’t see too many other districts using this I-Ready made by Curriculum Associates, designed to make kids better at Common Core.

I have to say shame on you Robert Andrzejewski twice in one day.  What is this guy thinking?  He needs to go!  Paving the Way to a New Christina?  Hardly.  Paving the Way to a revolt by taxpayers is more like it.  So let me get this straight.  They lie about rehiring librarians but they bring in new, untried testing?  And the board approved this crap?

See the board action item in all its glory: