Mike Matthews just put the following post out on Facebook.  Congrats to Mike for his victory.  This was a long and hard fight, but he finally did it.  Look for a different kind of DSEA in the future!

An email has just been sent to all DSEA members. Results were shared this morning and I won the run off election for DSEA president. I’m thrilled and so happy for this. Thank you to all my supporters and thank you to my three opponents, Karen Crouse, Dom Zaffora, and Danny Rufo, who ran really great, issues-based campaigns.

Biggest thank you to my best friend and always-running mate Jackie Kook. This win is bittersweet for me, but I know she will always be there to support me and this organization.

Happy St. Patrick’s Day, everyone, and I hope that you have a great weekend.

The voting for the Delaware State Education Association leadership officially ends tomorrow, January 23rd.  All ballots must be in as per the DSEA election website.  Initial results will be shared with the Executive Director and Business Manager of DSEA on Thursday, and preliminary results will be announced on January 27th.  If there is a challenge based on the preliminary results, that would have to be in by February 3rd.  At the DSEA Executive Board meeting on February 16th, the results will be officially ratified.

There are four races for the President slot and two for the Vice-President.  For President, there is Karen Crouse, Mike Matthews, Danny Rufo, and Dom Zaffora.  For Vice-President, there is Jackie Kook and Stephanie Ingraham.  Two are running on a “ticket” per se, but that ticket could be divided pending the results.  Those “tickets” are Matthews/Kook and Crouse/Ingraham.

What is at stake with this election?  The teacher’s union in Delaware would have a lot to contend with in the coming years.  The three-year terms would usher in the new Every Student Succeeds Act in Delaware along with mounting budget issues that will almost assuredly result in education cuts along the way.  Add on the new Carney administration and a promise from Governor John Carney to make the Delaware Department of Education less of an accountability factory and more of a resource center for districts and charters.  However, much of that will depend on the final approved ESSA state plan.  Even though ESSA was meant to eliminate a lot of the federal oversight, accountability regulations won’t change things that much.  And if history is an indicator, the Delaware DOE loves accountability.  The role of teacher evaluations will always be a major issue with DSEA.  Other potential factors affecting them, depending on the state budget, could be the Wilmington Education Improvement Commission redistricting plan or the possibility of consolidating districts around the state becoming more than a discussion point. 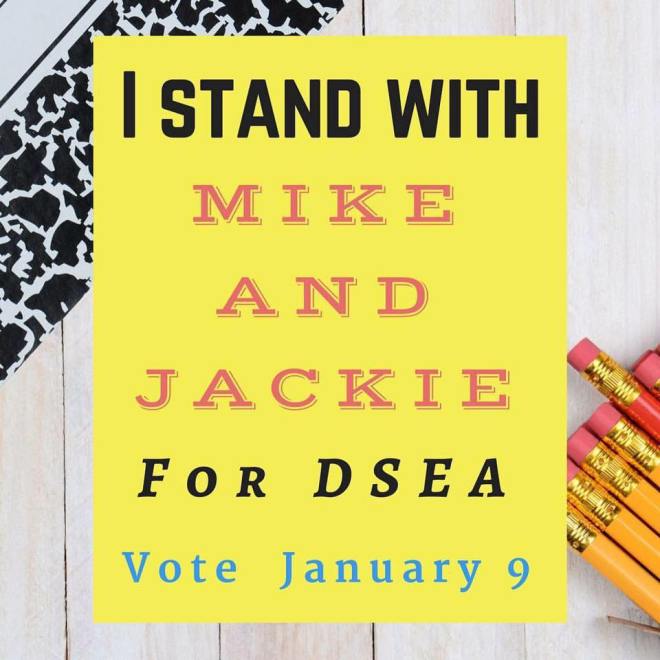 I hereby endorse Mike Matthews as President for the Delaware State Education Association.

I hereby endorse Jackie Kook as Vice-President for the Delaware State Education Association.

I’m not a teacher.  Just a parent.  But I have been very aware of DSEA the past few years and their role in education.  To say that relationship has been frosty at times would be an understatement.  I do not always agree with DSEA on issues.  But when I heard Mike and Jackie were running a joint ticket for DSEA leadership, I immediately rooted for them.  And then Danny Rufo announced his candidacy as President.  So I was torn for a long time.  I’ve known all three of these educators since shortly after I started blogging in 2014.  Danny is awesome.  But Mike and Jackie bring many battle scars to these roles.  Battles fought at the Delaware DOE and Legislative Hall.  Fought in front of cameras as they loudly advocated for teacher, student, and parent rights.  To me, they are more of a voice for teachers than the current leadership at DSEA.  They know the players and they know who to watch out for.

I get that these leadership roles change people.  You can’t just say whatever you want.  I don’t know Frederika Jenner very well at all.  But I do know Mike and Jackie.  I know Danny.  Crouse and Ingraham, endorsed by Jenner, just seem to be missing something.  I can’t pinpoint it.  Maybe it’s the fact that I have never seen them before.  Maybe it’s because when I asked three of the candidates their thoughts about student data privacy, the Matthews/Kook team and Rufo genuinely and thoughtfully answered.  Crouse and Ingraham gave some robotic Facebook response.  When I asked for more, they endorsed not getting into Facebook “battles” and having off-line conversations.  Sorry, Delaware has suffered immensely from those kind of talks.  The fourth candidate, Dom, I couldn’t pick out of a line-up.  No offense Dom!

What the package of Mike and Jackie could bring to Delaware education is a dream team beyond compare.  They know the issues.  They have great ideas on how to address those issues.  I’ve heard some say they are worried about Mike’s ability to “go along to get along”.  I firmly believe Mike will bring his A-game to the role and not put aside the issues he has fought for much longer than I have.  If there were a way to have co-Presidents AND a vice-president, I would say throw Rufo on that triumvirate!  But with the passage of the Every Student Succeeds Act and some crazy stuff coming up in education, Delaware’s largest teacher association needs people who will look at every angle.  Who aren’t afraid to go outside of the box for help.  Who will fight not just for teachers, but also what our students need.  The symbiotic relationship between teacher and student is a relationship like no other.  Teachers have had it rough.  But I think because of that fight, many in DSEA leadership have capitulated towards those in favor of corporate education reform to the detriment of that symbiotic relationship.

Between vouchers, personalized learning in a digital environment (which is the gravest threat to teachers in my opinion), and more charter school enrollment going up, the teacher unions have never been more vulnerable than they are right now.  They need a very strong shield, and Mike and Jackie are it!  So I urge every single member of DSEA to vote for Mike and Jackie on January 9th.  Don’t wait, vote that day.  Some will say a non-DSEA person should mind their own business and not get involved.  Too bad.  Freedom of the press baby!  Don’t like it?  Too bad.  At least I’m not making fake Facebook accounts trying to start trouble.  I will leave that right there.

Some will say I am only endorsing Mike and Jackie because I’m friends with them.  I’m friends with Danny too.  And do you want to know what drew me to all three of them in the first place?   Education.  If I never started blogging I wouldn’t know the first thing about any of this.  But this is the world I live in.