It is hard to know what he is saying because his grammar usage was…how shall I put this…without offending him…very poor.  For a Chair of the House Education Committee I would expect more, but I digress.  This led to some very hysterical responses by the way.  Which can be seen below… 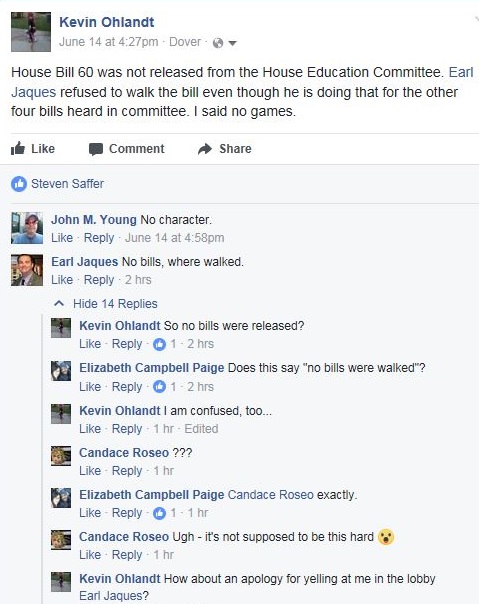 Gotta love that Earl Jaques!  To be honest, aside from opt out bills, Earl and I get along very well.  I would love to know what it is about opt out that makes him so crotchety!  So if ALL bills were signed during the committee meeting, doesn’t that mean House Bill 60 should be on the House Ready List, meaning it gets a full House vote?  Why is it showing this:

Whereas, as an example, House Bill 193 shows it was released:

And by the way, Speaker of the House Pete Schwartzkopf never responded to my email.

It seemed to be an even split between advocates and those who oppose the bill, but State Rep. Andria Bennett’s House Bill was released from committee today with 12 votes.  Next stop, the House Ready list.  Many of the folks who opposed the bill were in favor of students learning cursive but felt that was a decision best left to the local school board and not a mandate from the state.  The Delaware Department of Education opposed the bill for the same reasons, along with the Delaware Association of School Administrators and the Delaware School Boards Association.

Both sides cited research or studies weighing the pros and cons of the bill.  I supported it and gave public comment on how my son seemed to like cursive more than regular writing.  Another advocate for students with disabilities, Robert Overmiller with the Governor’s Advisory Council for Exceptional Citizens, also supported the bill because of the beneficial nature for special needs students.  A retired teacher supported the bill.

State Rep. Bennett said her idea for this bill came last Christmas when her own daughter was unable to read her grandmother’s cursive writing in a Christmas card.  Some advocates said it is important children know how to read original historic documents, such as The Declaration of Independence.  One gentleman said he would not hire someone at his company who didn’t know cursive since so many old property deeds and paperwork were written in cursive and they would not be able to understand those documents.  One parent stated they were vehemently against the bill and that it shouldn’t matter if kids can read historic documents in cursive because it is all available online.  She also said grandmothers are texting and using Instagram more and more these days.  State Rep. Joe Miro said with our state budget deficit we should not be mandating curriculum at the state level.

If you are in favor of this bill, please contact your state legislator and let them know!  I know I will call my own State Rep, Trey Paradee and ask him to support this bill!