I see this with charter schools quite a bit but postponing a regular board meeting for a school district?  That is highly unusual!  Today, the Christina School District postponed their regular January Board of Education meeting scheduled for tonight at Bayard Middle School.  Is this a fluke or is there a specific reason the meeting was postponed? END_OF_DOCUMENT_TOKEN_TO_BE_REPLACED

Last night, the Delaware State Board of Education unanimously put Delaware Academy of Public Safety & Security on formal review for academic and financial reasons.  The 6-0 vote puts the New Castle charter school through a two-month review period where they have to meet with the Charter School Accountability Committee and go through public hearings.  The placement of a charter school to formal review status does not mean they are being shut down.  Putting a school under formal review is the process.  Any decision to leave a school open or shut it down takes place after a formal review and the findings that come out of that.

I knew their enrollment was low but that isn’t the only reason they went under the formal review knife.  Academics played a big part.  This is always tough for me to support because I loathe the use of standardized testing in punishing any school.  With DAPSS, they went from Smarter Balanced to the SAT in a two-year period.  In 2015, the SAT was remade to include Common Core.

Either the Charter School Office was ready for the State Board to vote for the formal review or they are able to predict the future, because the below PDF was created at 1pm yesterday, four hours before the State Board of Education began their meeting!  I would have to say the school’s founder, Charlie Copeland, is not happy about this!

11,000 Public Comments.  Huge PDF files.  It must be Regulation 225, the very controversial regulation dealing with transgender student discrimination.  Today, Delaware Secretary of Education Dr. Susan Bunting announced the Development team will reconvene on January 31st to discuss what to do with the regulation going forward.

I tried to read all the public comments.  There is not enough time in the day.  I can say those “against” the regulation are much higher than those “for”.  The PDF for Delaware residents in the “for” category is 17 megabytes (mb).  The one for “against” is 136mb.  That is a mammoth pdf file!  There is another huge file for out-of-state residents.  That PDF is 21mb.  They are all against and seem to be put in a format where all you had to do was put your name and where you are from and that you are “against” the regulation.  Yet another file with unknown residency is over 3mb, and a file described as “other” is only half a megabyte.  Most of those were blank emails or asking the Secretary questions about when the vote was.

Last week, I was listening to the Rick Jensen show on WDEL.  It was when they were doing their “Weasel of the Year”.  Of course it went to this controversy with a huge amount of votes.  But during the show, Jensen made it sound like Delaware Governor John Carney had some problems with the wording when it came to parental rights.  Which I find interesting since he never mentions the words “opt out” when it comes to standardized testing or the Smarter Balanced Assessment.  But I digress.

I am predicting a HUGE crowd for this.  Probably why they are using the conference center at Del-Tech.  But with the amount of public comments, they might want to consider renting out the Dover Downs Speedway.

Even though I’ve done my fair share of beating up on the Delaware Department of Education, I felt they were transparent in a few ways.  Most specifically on their website.  But now I am finding that transparency is evaporating fast.  There are three examples of this, most of which would not be caught by most people.  For a blogger like myself, those three areas contained a lot of information.

The first is their special education section.  For years I would look at their Due Process Hearing and Administrative Complaint decisions.  Each report would name the specific school district or charter school.  Since last Spring, they stopped doing that.  Now it just says “______ school district” or _____ charter school”.  What is the big deal?  Don’t parents of students with disabilities have a right to know what kind of special education complaints are happening at certain schools? 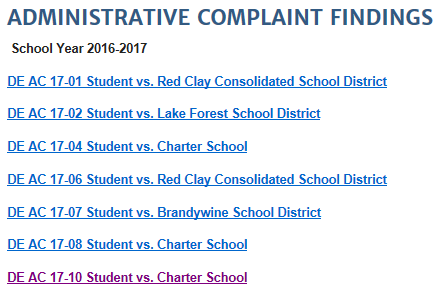 In looking at the above two screenshots from the DOE website, a pattern begins to form.  Last school year, there were three administrative complaints against charter schools in Delaware.  None of them are named.  I don’t need to be a forensic scientist to figure this one out.

The second area involves Department of Education personnel.  As long as I can remember, the Delaware State Board of Education would list changes to DOE personnel on their website as part of their agenda for each meeting.  That stopped a few months ago.  I did reach out to Donna Johnson, Executive Director of the State Board of Education.  She said the State Board does not control personnel at the DOE and they were the only state agency that listed personnel changes.  So it was a matter of consistency.  I get that, but it was also what made the DOE stand out above those other state agencies.  Not to belittle other state agencies, but the DOE is an important one and citizens have a right to know who is leaving or who is hired there.

The third area, which absolutely no one in their right mind would find is a bit tricky.  It involves their search engine.  I learned a few years ago that if you type “PDF” in their search bar it will bring up all PDF documents.  You can even tweak it so the results come up with the most recent documents.  I relied on this to see what was going on at the DOE.  The last PDF document that comes up on the search of most recent is from 5/2/2017.  I highly doubt the DOE is not creating PDF documents anymore.  I know that is the case because I’ve seen them.  But they somehow found a way to eliminate it from their search bar.  Maybe they figured out some crazed blogger from a specific IP address was always using it and disabled it.

It doesn’t shock me that these transparency issues coincide with the new Carney administration.  I, as well as others, have written about a continual lack of transparency coming from the state since Governor John Carney took office.  I guess the people no longer have a right to know.

As reported by Randall Chase with the Associated Press yesterday, Delaware’s Cyber Security Advisory Council kicked off their first meeting with a Freedom of Information Act (FOIA) violation.  But what the article didn’t cover was how the state tried to cover its tracks after the meeting.

James Collins, the state’s chief information officer and head of the council, then said the panel would meet in executive session, even though Delaware’s Freedom of Information Act requires that such closed-door meetings be noticed ahead of time.

But do they have the ability to time travel into the future to give that notice?  Apparently, they do!

This is the agenda for the first meeting as shown on Delaware’s Public Meeting Calendar website. 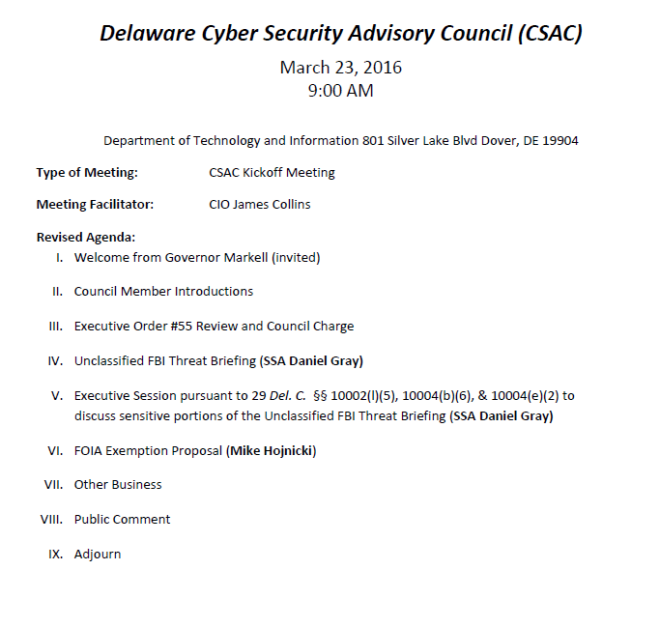 It looks like they have everything covered, right?  Including a FOIA Exemption Proposal because they know they are violating FOIA.  Here is the page from the Public Meeting Calendar website:

Looks okay to me, right?

In the above picture, taken from the bottom left-hand corner of the Public Meeting Calendar notice, it shows three change dates.  3/3/2016 was the original posting of the meeting, 3/22/2016 I would assume had the addition of the FBI Agent giving the briefing on the unclassified threat, and the 3/23/2016 change was to give notice about the group going into executive session to discuss the unclassified threat.  So maybe Randall Chase got it all wrong, right?

Nope.  This picture is the properties of the PDF.  If you right-click with your mouse on a PDF, it tells you when a PDF was created and modified.  This PDF was actually created yesterday, 3/23/2016 at 3:17:16pm.  It was a brand new agenda.  The part blacked out is my own personal location for my computer which I didn’t think was necessary to throw out there so I will fully admit I blacked it out in the picture.

Someone should really file a FOIA complaint on this one to the Delaware Department of Justice!  Oh wait, I already did…

Please take the time to read this.  It is a mammoth read.  With PDFs, if you right-click you can search for specific words or phrases.  I strongly recommend every single parent, teacher, staff members, legislator, and US citizen read this.  It will change everything forever.  If there is anything in here you don’t like, call your state Congress representatives and tell them to vote NO!!!! I know what I will be doing when I get home from work tonight…