The Capital School District Board of Education will discuss a draft of a Certificate of Necessity tonight.  Included in this draft is a master plan to essentially rebuild the district in various ways over the next five years.  Overall, the cost for these changes would be around $360 million over a long period of time.  For local taxpayers, the capital costs (for the new buildings and renovations) would be around $130 million.  The district has not calculated what this could cost taxpayers in school taxes. 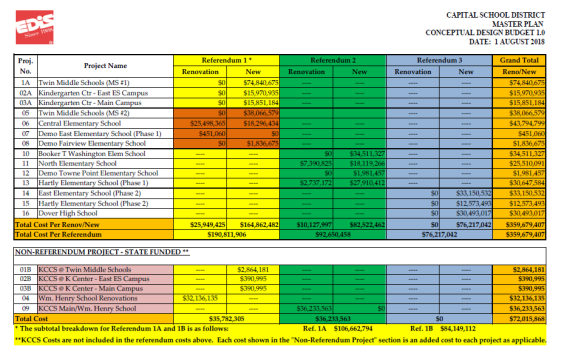 It has been over a decade since Capital went out for a referendum.  They are actually two years ahead of another district in terms of time between referenda. 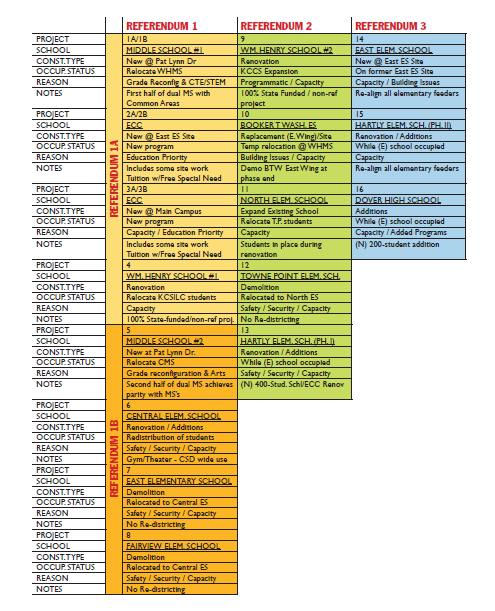 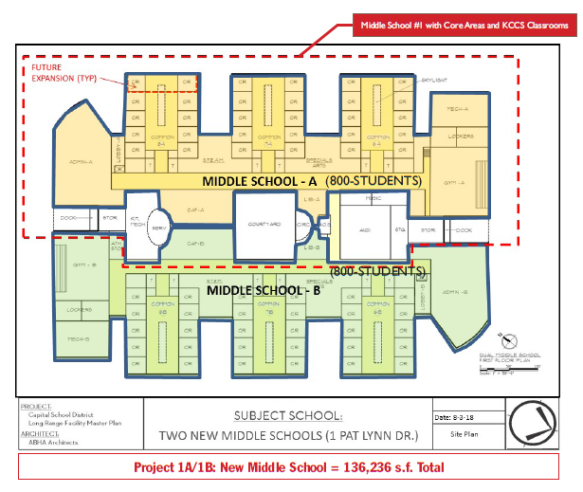 The caveat to all this is the Delaware Department of Education approving this Certificate of Necessity.  Capital applied for it last year but it was denied.  The state does not just approve any application.  There is a finite bucket of costs for these type of plans.  Currently, Appoquinimink and Cape Henlopen school districts are using a lot of those funds.  The DOE’s number one priority when approving these type of plans is student capacity.  While Capital’s student population has not increased at the rates of districts such as Appoquinimink, Cape Henlopen, and Indian River, they also house many of the programs for students with disabilities that have complex needs for all of Kent County.  Those populations, which require smaller classroom sizes, have accounted for much of the growth in the district.

The plan is very detailed.  When all is said and done, Capital is hoping to have the following:

Elementary schools would carry students in Grades 1-5.  Pre-K and Kindergarten would get new buildings.

The current East Dover E.S. would be demolished and in its place will be an Early Childhood Center.  Down the road they may put a new elementary school on that campus.

Fairview E.S. would be demolished.  Both Fairview and East students would move to the current location of Central Middle School.  This building would be rebranded as Elementary School at Central.

This is what Capital School District is hoping to look like by 2033: 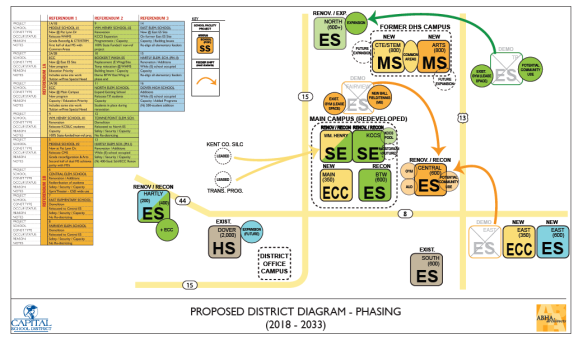 These are very long-range plans going into the next couple of decades. 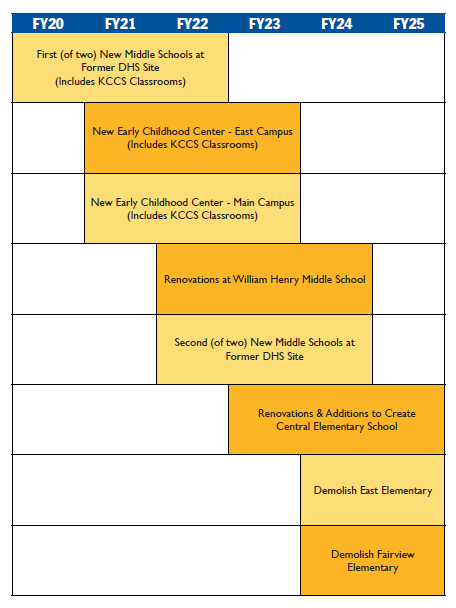 The full draft can be found here:

The Capital School District has mighty plans for the district!  As part of their ongoing strategic plan, the district will discuss potential building and grade configurations at their board meeting this evening, beginning at 7pm.

While these plans are not set in stone, there is serious discussion about what the district will physically look like in the long run.  Referendum haters may want to relax because the plans I am about to discuss are long-term and could take twenty years to reach the finale.  But current plans call for sweeping building changes, grade configurations, and a new way of looking at middle school.  The district began earnestly looking at these changes last fall and held staff and community forums earlier this month after a facility master plan was presented to the board.

With the proposed changes, two current elementary schools would disappear and another would be renovated. Fairview and Town Pointe Elementary Schools would be demolished and Dover East would get a new building.  Both plans call for a potential expansion at Dover North.  Where things get very interesting are the plans for the existing middle schools, William Henry and Central Middle.  Central Middle would become an elementary school.  Since William Henry is connected to Kent County Community School, the plan is to use room in William Henry to house a growing high-needs special needs population.  This does not mean all special education students in the district would be going to this potential facility!

For the middle schools, they would be two separate schools but joined by a common area.  Potential plans would called for shared resources between the two such as a cafeteria and large gym.  But it would also allow the district to have Career-Technical education programs in one school and arts programs in another.  But since the schools would be in the same location, it would be difficult for diversity issues to come up since they are both there.  The district is looking at potential magnet programs in the future.  The proposed site for the new middle schools would be on the property of the old Dover High School.

Those are the major changes.  Other options call for an early childhood center attached to Dover East and potentially one next to Booker T. Washington Elementary School.  Both of the potential options would call for what is known as a “Main Campus” which would house the expanded Kent County Community School, Booker T. Washington (which holds the district Delaware Autism Program inclusion program) and the proposed early childhood center.  As well, other space in William Henry could house the Transition program for students with high needs between the ages of 18-21.  The district now leases space in a building across from the Department of Education in Dover.

In terms of grade configurations, the plan is to have the following: early childhood centers would hold Pre-K to Kindergarten, elementary schools would hold 1st-5th grade, middle schools would have 6th-8th, and high school would be 9th-12th grades.

So how much is all of this going to cost?  Probably millions and millions of dollars.  But not all at once.  The goal is to look at the projected growth of the district based on a capacity of 600 students in each elementary school, 750 in the middle schools, and 1,800 for the high school.  Keep in mind, this is a twenty year plan.  Things could very well change during the next two decades.  Projections are good but you never know when a huge business could come to Dover or Kent County which could change all the numbers.  But I like this plan.  I like the idea of sharing resources at the middle school level.  Having the “Main Campus” could also allow for that which could save the district tons of money.  Of course, any new construction or renovation costs tons of money but everything old must one day become new! 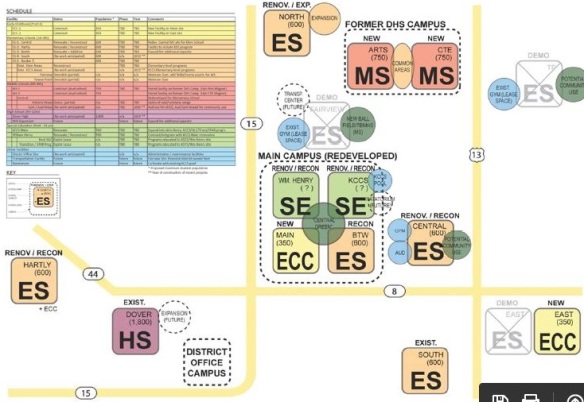 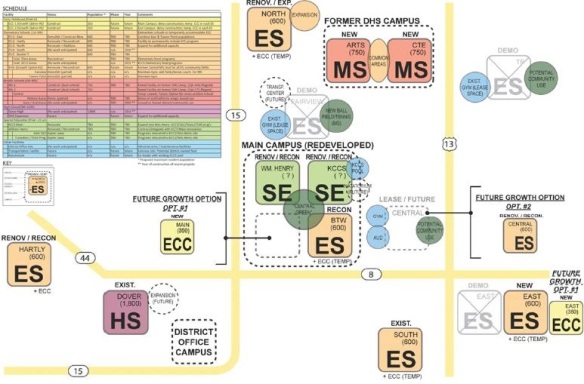 As the above diagrams show, Hartly Elementary School, Dover South Elementary School and Dover North Elementary School would have the least amount of changes.  The revamped district would actually have one less elementary school than present, but the populations in each school would change based on removing Kindergarten and adding 5th grade.  As a citizen of Dover, this will definitely be one to watch!  When the strategic plan process began last year I strongly advocated for changing the middle school grade configuration to what they are now proposing.  To hear the plans in more detail, come on out to the board meeting at the district office!

For those who haven’t heard, I am jumping into the fire!  Anyone reading this blog knows my stances on education.  Is it enough though?  We need change and we need it now.

These are the reasons I am running.  I will tackle each reason below. 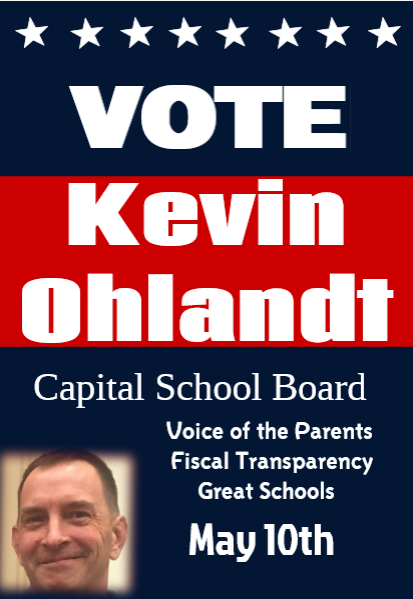 Only 23 public schools (public, charter and vocational) in Delaware got a D.  Not as bad as the F Club.  Some of you have a very strong chance of getting into the C club or higher during the 2014-2015 Academic Year.  I would make that happen.  You are no Charter School of Wilmington, but you need a great deal of work.  Don’t forget parents, these are based on the Delaware average for special education in our schools, which is at 13.5%.  Some have estimated that as high as 22% of kids in Delaware should be on an IEP due to their exceptionalities.  So as a state, we have a long way to go.