The Senate Executive Committee canceled their meeting tomorrow.  The only item on the agenda dealt with Governor John Carney’s nomination of Wali Rushdan for the State Board of Education.  The Executive Committee must clear any nominations before the Delaware Senate can vote as a body for that nomination.  No reasons were provided for the cancellation of the meeting. 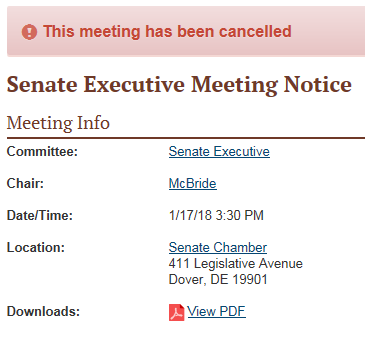 Things that make you go hmmm…

Special shout-out to State Board of Education President Dr. Dennis Loftus. On my way back from their board meeting, my car stalled out at a light at a major Dover intersection. I got out to direct traffic until the Dover Police got there. Dr. Loftus came by and asked me if I needed help. Even though I didn’t, I appreciated the gesture, especially to a guy that is very critical of the Board he is on.

In the end, my transmission fluid dipstick somehow came loose which resulted in a loss of transmission fluid. Since this dipstick is buried behind my engine I’m not sure when or how this happened. My car would not move in the drive position when the light turned green. I didn’t know this when Dr. Loftus drove by. Actually the tow truck driver figured that one out. Luckily, $80 for the tow and $36 in transmission fluid solved the problem. Not something I could really afford now, but it is what it is. It could have been a lot worse. Thank you Dr. Loftus for the offer to help on a very cold night after you had just spent the past three and a half hours at a meeting and probably just wanted to get home to your family.  I suspect that if I had taken you up on the help, it would have meant more time unselfishly given.

As I’ve always said, I won’t write about personal lives on this blog and some of the people I write negative things about on my blog are due to their public stances on education.  But make no mistake, these are some of the nicest people in the world.  With that being said, I have never written anything negative about Dr. Loftus.  But I’m sure he knows what I have written about the State Board of Ed and that I often express a desire to see them as elected officials, not Governor appointed.  It is a bizarre world we live in, but tonight, I greatly appreciated an offer.

At the Christina School District Board of Education meeting two weeks ago, Chief Financial Officer Robert Silber gave insight to a very interesting meeting at the Delaware Department of Education concerning the recent decision to give Delaware charter schools a portion of match tax funds through the local funding formula.  Silber’s description of Delaware Secretary Education Dr. Susan Bunting’s reaction during this meeting was surprising.

The memo that they also sent to districts said that due to the uncertainties associated with the budget, we’re holding off on a determination of match dollars until legislators made a determination around how the proposed reductions were going to occur.  They didn’t want, as they expressed it to us, they didn’t want to make a decision in advance that may have been different based upon the budget (state) for this year since there were a lot of talk legislatively around match tax.  The Department then came out with a position statement that said they believe match taxes are operating expenses and as an operating expense should be included.  District business managers then turned as a group and said to the Department, as part of the process, that we would like to have a meeting to discuss that.  That meeting occurred last Thursday (August 3rd) and I would say that the Secretary and a member of her staff were there, listening.  But there was no decision rendered at that meeting and we have not seen anything since that point in time to know whether or not they listened to our concerns.  One of the concerns that we expressed, and is probably the easiest one for me to grasp around, is that when you take a look at the various match components that exist, one of those matches is for reading resources.  Reading resource teachers are, by the definition of the dollars enabling legislation to begin with, was very specifically targeted to elementary schools.  So we posed the question to the Secretary, once these dollars go into the formula, those same dollars are going to a high school.  It doesn’t make logical sense and we asked that be considered.  She’s considering it.

Come on Dr. Bunting!  As someone who comes from a traditional school district, you know how this stuff works.  Charters lobby for more money, whether it is justified or not.  Just because they want it doesn’t mean it is right.  I get that everyone wants a piece of the funding pie but sometimes the taste isn’t so palatable.  Don’t give in to this Bunting!  We live in a state where charters are able to keep their excess transportation funds.  It is VERY hypocritical for the Department of Education to give in to the charters while that anomaly exists.  We need a Secretary who will stand up to these freakish money requests from the charters and do what is right!  We need a home run here, not a bunt! 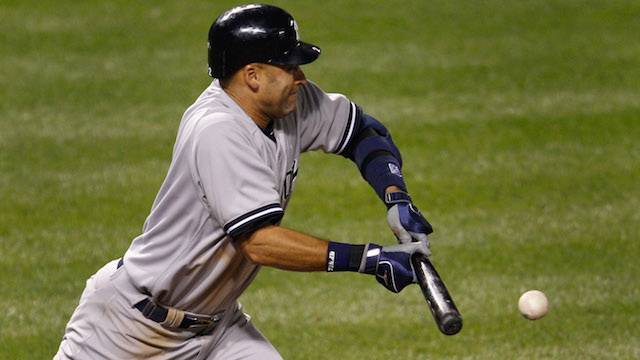 The Delaware Governor’s ESSA Advisory Committee will meet tonight at Legislative Hall in the House Majority Hearing Room.  The fun starts at 6pm.  Will Jack Markell show up?  It would be very tight.  At 5pm he will be in Wilmington for the Delaware Open Data Launch, and then he has to be at Dover Downs for the 2016 Volunteer Awards ceremony.

I can’t believe there has been no announcement concerning who is actually on this committee.  I know State Rep. Kim Williams, Deb Stevens from DSEA, and Appo Superintendent Matt Burrows are on it.  If I were a betting man, I’m sure Kendall Massett from the Delaware Charter Schools Network is on it.  She rarely gives up a spot on any committee for a designee.  Someone from Rodel.  Perhaps Kevin Carson from the Delaware Association of School Administrators.  John Marinucci from the Delaware School Boards Association.  I have a feeling I will know most of this crowd.  See you tonight!

I strongly encourage everyone in Delaware to go to the Assessment Inventory Task Force meeting tonight at the Delaware Dept. of Education Townsend Building in Dover at 5:00pm.  The transparency surrounding this task force has been horrible.  When Senate Joint Resolution #2 was discussed during the Senate Education Committee meeting last June, the audience was told these would be public meetings with full transparency.  We are now seeing that isn’t the case at all.  I’m really not sure where the minutes are for this because there are none.  We can thank Senator David Sokola for this.  Tonight’s meeting is the third meeting and no minutes have been listed on the SJR #2 page.  You would think the DOE would also put minutes for this group on their website since it was their idea anyways, but no.  Unless you go to these meetings, we have no idea what they are doing.

For those thinking “Why should I go?  It’s not like they care about my input anyways!”, you are probably right.  But we need all eyes on this.  When asked if the Smarter Balanced Assessment would be a part of this conversation, Governor Markell’s Education Policy Advisor Lindsay O’Mara said:

“Absolutely, yes, all assessments will be the subject of discussion.  We were all invited together to have a discussion about assessments.  Hopefully those discussions will be grounded in the reality of the cycle of state legal requirements around assessments.  But were happy to have any conversation around any assessment that any member of this group would put on the table.”

Time to live up to that promise Lindsay!  If we want this task force to Achieve it’s original promise, then we need to start making sure it is wide open to all.

Updated 15 minutes later.  The minutes for the second meeting are out there, but I could only find them on the Delaware Public Meeting Calendar in draft form:

So I ask again: where is the conversation about Smarter Balanced being put on the table?  Or is the Smarter Balanced the power brokers behind this that want to eat up all the other assessments unless they support SBAC?  And I see a whole let of Achieve Inc. mentions in these minutes.  Speaking of power brokers…