Kilroy wrote his last post today.  I wasn’t expecting it, but I’m not surprised.  I’m sad, for many reasons.  I will still talk to the man behind Kilroy.  Perhaps one day we can go fishing at his paradise in really slower lower.  But dammit, Kilroy filled me in on so much with Delaware education before I took a crack at blogging.  He lent me his blog for about a month and a half three years ago so I could tell a story about my son.  We talked a lot over the past few years.  Over time, he became a friend.  Not a friend I talk to every day or even see.  But a friend nonetheless.

Some of the commenters over at Kilroy’s Delaware pissed me off to no end.  That is no secret, especially that one guy.  But I loved the discussion even if I didn’t agree with the point of view.  Things got nasty between myself and a few of the commenters from time to time.  But Kilroy loved it.  He loved his virtual kitchen table.  He was the godfather of Delaware education blogs and paved the way for the rest of us fighting the good fight.

Transparent Christina, Kavips, and now Kilroy’s Delaware.  We still have other education blogs, but they are either mixed in with political blogs (Delaware Liberal and Blue Delaware) or the other blogs really don’t post that often.  They were the big three.  I get it.  Life moves on.  Blogs are not a forever thing.  I’m very surprised mine has lasted as long as it has.  I feel this insurmountable task of carrying the torch for the giants that came before me.  Someday, another irate or concerned parent will take up the mantle.  Perhaps a teacher.  Blogging is not dead.

I often consider hanging it up though.  Is Delaware education blogging needed anymore?  Things have calmed down since Governor Markell left his throne.  But there are still considerable dangers and concerns going on with education.  Perhaps bigger than all that came before.  The biggest concerns I have are vouchers, personalized learning, competency-based education, funding, digital technology, and student data privacy.  And hovering above all those issues is how students with disabilities will fit in with this new world.  I’ve seen the end goals, and any legislator, teacher, or educator can tell me that will never happen.  But they aren’t in the corporate world.  Not knee-deep in it.  That’s where Rodel comes in.  They are the middle man between the corporations and the education stakeholders, whether it is the Governor, the Delaware Dept. of Education, schools, teachers, and even parents at times.  As long as they are peddling their wares, I will try my best to stick around.

There will never be another Kilroy.  He had such a unique identity and style to his writing.  Even the best imitator couldn’t come close.  I’ll miss his cryptic hints and his crazy codes he would drop.  He had a mission, and he accomplished it.  I remember taping the Senate session when they passed his digital recording bill (finally) and sent him a copy.  I was proud of him because I knew great things don’t always come easy.  But with sweat and perseverance, change can come.

Best of luck Kilroy.  I will forever be grateful for you taking a chance on an odd parent from Kent County and getting me going in this very surreal blogging world.  Because of you, my life was forever changed.  Sometimes it wasn’t always good change, but it hasn’t been bad.  You were the gateway to my meeting a ton of people (including yourself) who have left a mark on my life, often at times I needed it more than ever.  At the end of the day, it is about friendship and trying to help people.  Even when you don’t get anything for yourself out of it.  You taught me that Kilroy, along with Kavips and Transparent Christina.

Should they ever make a movie about Kilroy’s Delaware, I want Robert DeNiro to play him! 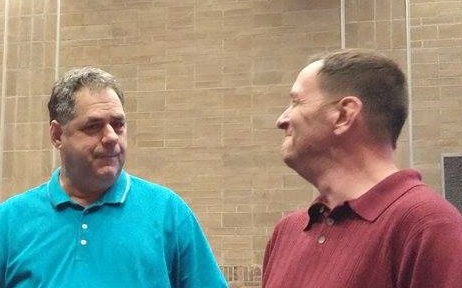 On May 25th, Delaware Governor Jack Markell signed House Bill 61 into law. All public school boards in Delaware must record their board meetings when they are in public session and make them available on their website within seven business days of the meeting. The law goes into effect 90 days after signature, so by August 25th this is the law of the land!

This is a true victory for Kilroy’s Delaware, the godfather of education blogs in Delaware. For the very few who might not know, this has been Kilroy’s mission for the past fifty billion years or something like that. Many helped along the way, but he carried the flame. And with only a pocket full of college credits!

Kilroy promised his readers that after this mission was done he would release his long-awaited story about how “Johnny can’t read”.  I can’t wait to read it!  Congrats to the main man, the man who has inspired so many of us, who has been doing this much longer than I have, and keeps on going, the one, the only,

Kilroy’s School Board Audio Recording bill, sponsored by State Rep. Deb Hudson, passed the Delaware House of Representatives unanimously just now.  The final vote was 40 yes and 1 absent.  House Bill 61 is the second time this bill has been in the General Assembly.  House Bill 23, from the 147th General Assembly, never got a full House vote.

This is Kilroy’s legacy to Delaware.  He has fought hard for this bill for years.  The first time I ever went to Legislative Hall was for my failed attempt to get House Bill 23 up on the agenda.  This was my thanks to Kilroy for letting me write a very long story about my son on his blog before I started this one.  A lot has happened since then and the need for transparency from our school boards has never been greater.  It still has to go through the Senate, with the Senate Education Committee first.  But there is no reason why it shouldn’t pass there.

Congrats Kilroy!  I’m glad I got to hear it live!

State Rep. Earl Jaques said it was a great bill!

What do I think of Secretary of Education Mark Murphy?  This question of me in a sidebar conversation by the famous Delaware blogger, Kilroy, of Kilroy’s Delaware fame.  This is a pretty loaded question, because I have several opinions.

Personally, I don’t know the man.  Nor would I want to.  We don’t travel in the same circles, and for better or worse (go with the latter), he is the executive director of my son’s education in Delaware.  With that being said…

He is extremely incompetent.  I’ve been to a few Delaware Board of Education meetings, and when he talks, I want to laugh.  For the most part, he plays up the parts of education that I abhor the most.  Charter Schools, Common Core and the Smarter Balanced Assessment are his babies, and when he talks about them, it’s like watching a kid play on Xbox for the first time.  The glee, the sickening joy in his eyes, the elfish smile on his face…

I have seen him get upset once at a Board of Ed meeting.  That was the last one, when the results of the Delaware teacher effectiveness ratings came out.  And no Delaware teachers were rated ineffective.  0%!  Man, did that piss off Murphy!  He looked like someone took away that Xbox!  He was visibly angry, and it was obvious he was going to have none of that!

I view his climb to the top of education in our state with shock and no awe.  Everyone continues this sentence with “He started out as a gym teacher.”  And that isn’t true.  Before that, he worked at a residential treatment center.  I have no idea which one, or what he did there.  These treatment centers are where students with disabilities get sent when the school and the home have run out of options.  I would think Murphy would have a pretty good understanding of what these students need if he decided to work at one.  I couldn’t be more wrong.

What has become of special education under Murphy’s watch is a nightmare of epic proportions.  What he has done to education in general is even worse.  He is Governor Jack Markell’s golden boy to implement whatever Jack wants.  And as a result, Murphy has become a charter loving Common Core high-stakes test worshipping special education hating maniac.  But when the going gets tough, like yesterday at the big meeting between the DOE and the superintendents of the low-income priority schools, Murphy was nowhere to be found.  He’s the Secretary of friggin’ Education for the state and he was a no-show!  What could be more important than this meeting?  As I commented on Kavips blog, maybe he got confused between priority and priory schools!  When I see him at Board meetings, he rarely speaks.  He’s constantly looking at what appears to be a cell phone and adjusting his glasses.  It looks like the last place he wants to be.

Under Murphy’s watch, we have seen Common Core suck the life out of teachers, students and parents.  We’ve seen special education go from something halfway between okay and sucks to really sucks. We’ve seen charter school applications increase rapidly.  We’ve seen half of Delaware’s race to the top money get kept by the Delaware DOE.  We’ve seen the first sign of the Apocalypse, the Smarter Balanced Assessment.  We’ve seen him hire 29 year olds to become the new Chief Of Accountability for the DOE.  We’ve seen a non-elected state Board of Education do nothing that would contradict Murphy or Jack.  We’ve seen him support the destruction of the public school system by getting jacked-up legislation passed that will judge teachers on how a student tests one time a year on The Clockwork Orange Smarter Balanced Test.  We’ve seen him not give appropriate funding to schools who need it the most and then support the utter insanity of having the state take those schools back to turn them into charter schools.  We’ve seen him support breaking up teacher’s unions by coming out with a Memorandum Of Understanding to two school districts that appears to be plagiarized from other states’ similar edicts (Thanks for that one JY!).  We’ve seen tens of millions of dollars go out of state to residential treatment centers because Murphy can’t run the ball on special education right and God knows what else he has cooking with that!  We’ve seen him bow to the “masters of education” in Rodel and the Vision year crap, which are just more fronts for the Common Core agenda.

So do I have a high opinion of the guy?  Hell no!  If I could sum it up in a few sentences, it would be this.  You have only one pair of shoes.  You step in gum.  The gum won’t get off your shoe no matter how hard you try.  It annoys the hell out of you, and it affects you every time you put your damn shoes on.  And you can’t buy new shoes, so you are stuck with this crap on your shoes, all the time.  Mark Murphy is the gum on my shoe that just won’t go away.  And he has played this role for every public school student, teacher and parent.