I attended the first half of the Delaware Education Funding Task Force meeting tonight.  After Delaware Governor Jack Markell gave some brief opening comments thanking the members of the committee for their hard work, he advised them this isn’t an easy task force.  As he was leaving, he made a point to greet and shake hands with everyone in the room.  And I mean everyone!

Members trickled in so the meeting didn’t start until about 5:20.  There are some very vocal members on this committee with very strong ideologies.  The bad part is when many of them are different.  I have no clue how this group is going to come to a consensus in the next couple months.  I saw members on this task force who belong to the General Assembly (who listened for the most part), DOE, State Board, the traditional districts, the charter crowd, Rodel, school boards, the business community, Delaware PTA, GACEC, and advocates for ELL students.

Donna Johnson from the State Board of Education did make it a point to talk about the group’s discussions about basic special education funding for students in Kindergarten to 3rd grade.  I do recall seeing a potential funding model where funds were reallocated in the needs-based funding formula for the state.  But this shouldn’t even be a topic of conversation for an education funding task force.  Put House Bill 30 up for a full vote and get it done.  It’s what, $11.5 million to fund that bill?  Make it happen.  Maybe the DOE can get rid of a ton of their vendor contracts and their non-vendor paychecks for all these people who show up on Delaware Online Checkbook with no transparency surrounding these payments whatsoever.  After all, the DOE were the ones that torpedoed this funding when the topic first came up six years ago.

It was interesting hearing some members talk about the lack of authority for a school principal to make funding decisions.  This was more from the charter side of the equation.  But members on the other side disagreed, saying they have the authority based on the pool of money they get from the district.  One member said even if they do find the right number or formula for funding, how do you audit that?  Does that money allocated as extra support for low-income and ELL students mean reduced classroom sizes or more teachers?  Some members felt that because 41 states have successful funding formulas that will translate as success for Delaware.  But how is that success measured?  By standardized tests?  Graduation rates?  Will they have pilot schools or districts to try it out?  What does low-income and poverty mean in terms of percentage of students?  Since the state changed how they measure poverty, but the DOE goes by one thing and DHHS goes by another, which is right?  If the group doesn’t necessarily agree with the WEIC funding formulas, what does that mean for the General Assembly when they vote on the redistricting in Wilmington?  If the majority of the group believes changing property assessments is the way to go what does that mean for the property owners who have no voice on this committee?  We should do what California does and vote on propositions like this.  Then we will see where the real voting power exists!

There were people at this meeting who I have never seen face to face but I have written about them a bit.  One as recently as last Thursday.  I had to pick up some groceries and my son REALLY wanted Dairy Queen so I snuck out while the group was on their pizza break.  I wished I could have stayed, but family first!  I am very curious what comes out of the final report.

As predicted, the final hours of the Delaware 148th General Assembly are going to be a hotbed of activity.  It will be Governor Markell’s last chance to get the legislation HE wants passed while he is still Governor.  For the Senate Joint Resolution #2 Assessment Inventory Committee, no date has been scheduled for their next meeting.  The final report is due 6/30/16.  And just now, the Delaware Senate passed Senate Concurrent Resolution #56.  This concurrent resolution which will most likely get passed by the Delaware House of Representatives today, extends the due date for the final report of the Education Funding Task Force.  This group was formed from Senate Joint Resolution #4 last year. 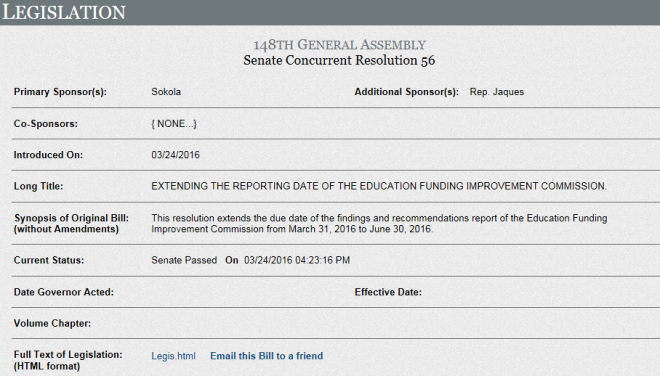 These are the kinds of shenanigans where transparency goes out the window.  Rules are suspended so bills aren’t heard in committee and bills fly in and out of Legislative Hall on the last day of session.  The Governor will sign them because he is the one calling all the shots.  And on so many of these kinds of bills, we see the same names: Sokola and Jaques.  The education bullies of the state.  The ones who treat the Delaware DOE and State Board of Education like they are the royalty of Delaware.  The ones who treat parents and their rights as if they are a fly to swat away.  The ones who take good education bills and make mincemeat of them (or try).  Enough.  Someone run against these two education thugs.  Please!  If I were a betting man, I would say the results of these two committees are a foregone conclusion and the legislation that will come out of them was written a long time ago.  They just want to ram it through in the wee hours of June 30th, possibly into July 1st.  When everyone will be going nuts over the budget, Markell will take advantage of this and get his usual legislative accomplices to do his work.  WAKE UP DELAWARE!