There are two major reasons Delaware schools aren’t closing yet.  Equity and special education.  It all comes down to the digital learning environment school kids will be exposed to.  School districts are worried about potential lawsuits.

The Education Department said that the Individuals with Disabilities Education Act and the Americans with Disabilities Act do not specify what should occur if schools are closed for an extended period of time, which is considered more than 10 consecutive days. However, schools should generally offer the same level of services to students with disabilities that they are providing to other children.

As for equity, what about those families that don’t have wifi or bandwidth, or for that matter, computers, for their children to access digital learning from home.  That is a huge concern.  If they don’t receive instruction how can they even grasp educational material?  What happens when the students return and those who were not able to get the digital learning are woefully behind?

These are the concerns the districts are having.  And while we are in a state of emergency at not just the state level but the whole country, it does open up the possibility of litigation.  But what is more important?  Money or the health and well-being of not just students but every single citizen in the state?  With all the ed-tech personalized learning, how did these get-rich quick companies not prepare for a day like this?  But I digress…

So Governor Carney needs to be the one to make the call according to the districts.  But will he?  Or will he leave it up to the districts?  As the risk and danger to Delaware citizens continues.  Don’t believe what the Secretary of Health in Delaware is saying.  About schools being safer.  They aren’t.  It is just a bigger Petri dish.

Meanwhile, parents are left with a choice- do I send my kid to school or not?  Some districts, like Christina, are telling parents they need a doctor’s note in order to have an absence excused.  So some parents are sending kids in whether they are sick or not cause their kid has too many absences already.  It is a dangerous time folks!

Today, the Rodel Teacher Council gave a presentation to the Delaware State Board of Education with policy recommendations for their Personalized Learning Blueprint.  I’ve written about them before and actually received a bit of heat from a few of their membership.  These aren’t bad people or bad teachers.  I truly believe they have been brainwashed into the corporate education reform movement.  Some may not even realize it.  But what they came out with today for their State Board presentation literally frightens me and makes me wonder more than ever where public education is heading.  I have to wonder if the State Board of Education would ever allow those who are against this kind of thing to give a presention to them.

This presentation has all the education reform buzz words in it: Personalized Learning, Blended Learning, Competency-Based Education, Micro Credentials, Seat-Time, Social and Emotional Learning, Waivers, Assessment, and Standards.  To break it down, under these models the eventual goal is what is known as “stealth assessments”, the state assessment broken down in chunks at the end of each unit.  The student can’t move on until they “master” the material provided to them from their digital technology.  Predicting the future here, I imagine Delaware will eventually incorporate some kind of “digital badge” the student would get once they “master” the material (Colorado is at the forefront of this ridiculousness).  Meanwhile, all the data from this ed tech is going to vendors galore.  Personal and private data, every single keystroke.

So why are Delaware educators jumping on this bandwagon when it will eventually lead to the demise of the public school teacher?  Your guess is as good as mine.  Special standing, power, incentive for future mobility in their profession?  Perhaps they are blind to how their actions today will lead to the end of their professional world as we know it.  The fact that ANY Delaware school district teacher would get behind something with the Rodel name in it makes me suspect.  Very suspect.  The fact this council is going before the State Board of Education after they went to some legislators earlier this month makes me very worried.  Worried that legislation is coming that will allow this Rodel Vision of Educational Paradise.

Make no mistake.  This has been in the planning stages for years.  And it will get a huge push in states once Blockchain Technology really gets going.  And Delaware will be at the forefront of that initiative.  People read stuff like this from me and some say I am wearing a tin hat or engaging in conspiracy theory.  Let them.  They said the same thing when I said Delaware’s Assessment Inventory Committee was just a big distraction from opt out and would produce nothing worthwhile.  I said that before the legislation even passed which created that committee.

What is Governor Carney’s role in all this?  I don’t think he has an original thought on any of this.  I think his staff tells him what to do.  Many of those staff members are fully aligned with this Rodelian future and have been for quite a while.

To read what the Rodel Teacher Council (aka Rodel) wants policy-makers in Delaware to subscribe to, please read the document below.

How did the Competency-Based Learning Guiding Coalition get around the Delaware State Education Association?

The Rodel Foundation, Delaware DOE, and the Competency-Based Learning Guiding Coalition had a meeting coming up on November 20th, 2014.  In the meantime, things were heating up with the priority schools, especially a looming showdown between the Christina School District and the Delaware DOE.  Many people felt no matter what Christina or Red Clay did, the DOE was going to take the six schools and convert them to charter schools.  The Smarter Balanced Assessment Consortium was getting ready to release the cut scores on the upcoming high-stakes test based on the field tests administered earlier that Spring.  The Delaware DOE was starting their town halls for their “school report card”.  They had released surveys to the public with ridiculous things like stop lights for grades (this eventually became the Delaware School Success Framework).  The IEP Task Force was in full swing and they were actively working on their final draft.  Unbeknownst to most, former Rodel employee Matthew Korobkin began his job in the Secretary of Education’s office at the DOE to begin work on the Special Education Strategic Plan.  This blogger had started doing some serious digging into Rodel after what I found out at the end of October of 2014.  The General Election came and went.  Matt Denn won the Delaware Attorney General slot in a landslide.  Two new state reps would have a dramatic effect on education in the General Assembly in the next year.

On November 19th, 2014, I released my mammoth Rodel article.  Knowing this little group was meeting in back-door meetings would have been good to know when I was writing that article.  It would have filled in some holes.  From what I heard from a few people, this article really rattled Rodel CEO Paul Herdman.  I know he was upset with me for daring to allege that Rodel would ever make money from hedge funds and somehow profit off Delaware education.  But in any event, the CBL Guiding Coalition was about to meet…

I tried the link referenced in the email to an Ed Week article, but the link no longer exists.  I have no doubt it reference some personalized learning school and how great it was.  When you look at the above email, note the word barriers.  If competency-based learning is supposed to be so great, why would there be any barriers?  At this point, it is probably a good idea to let folks know who was on both the Core and Advisory groups for this. 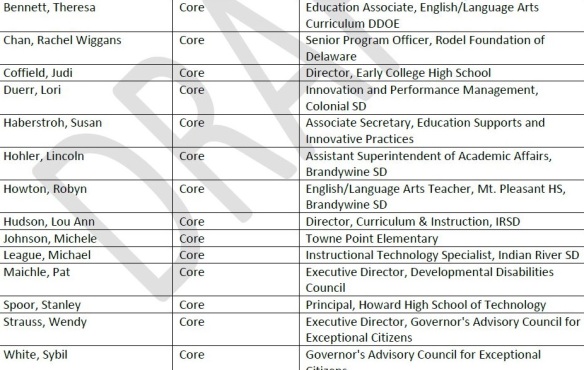 In terms of involvement, I don’t know if every single person participated in this CBL Guiding Coalition that was now divided into two groups. I do know, for example, that Yvonne Johnson with the Delaware PTA did not go to any meetings of this group whatsoever.  There were six district Superintendents and one charter Head of School on the coalition.  Quite a few of the teachers were also on the Rodel Teacher Council.  Note the presence of university and college members.  There was a specific reason for that which will come in later parts.  Now, on most education committees and task forces, or any type of education group, there is always representation from the Delaware State Education Association.  But not on this coalition!  To me, the key figures in this group were Michael Watson, Susan Haberstroh, Wayne Hartschuh and Donna Johnson.  They were (and still are) important people at the DOE who were in a position to let the ideas of this group come into being.

In terms of the barriers, the coalition was very visible with what the policy and system barriers could be: 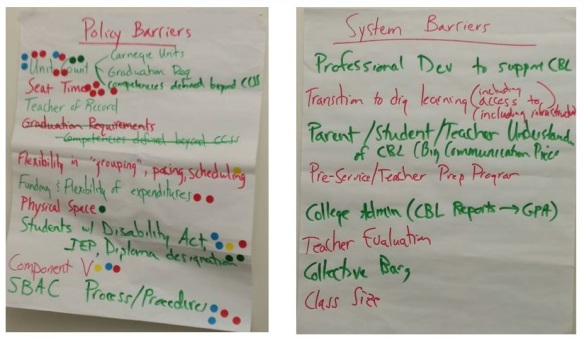 In answer to why DSEA wasn’t represented on this committee, I think the words “collective barg”, which would be “collective bargaining” gives a clear answer to that question.  Unless this is all about some secret archaeology plan, I can only assume “dig learning” is “digital learning”.

Policies on seat time?  What does that mean?  In a competency-based world, a student doesn’t move on until they master the assignment or concept.  They must be proficient.  So what measures that proficiency?  The teacher?  Or a stealth assessment embedded into the ed tech the student is working on?  I love how the DOE and ed reformers turn simple words like “jigsaw” into something else.  I know what they mean, but why do they do that?

By the time their January 2015 meeting came around, the holidays came and went.  All eyes were on the Christina School District as they valiantly fought the DOE on the three priority schools in their district.  Red Clay signed their Memorandum of Understanding with the DOE.  A financial crisis occurred during Family Foundation’s charter renewal.  The community rallied for Gateway Lab School.  Parents were talking more and more about opt out.  And the General Assembly was back in session…

To Be Continued in Part 4: Playing with regulations, priorities change, and the DOE and the Governor freak out…