Something is afoot at Dickinson High School in the Red Clay Consolidated School District.  Last week, a message went out to parents that Physical Education teacher Andrew Schuster was arrested and charged with theft of electronics.  From what I’m hearing from some Red Clay parents, who wish to remain anonymous for obvious reasons, there was a Delawareonline article on this that disappeared.  But that article is gone, as well as several Facebook articles about it.  Good luck trying to get me to retract this!

And, sad to say, this won’t be the last educator arrest post I put up in the coming days.  Another arrest went down last night but until further details about that one come out officially, I am staying mum for now.  I’ve seen many Facebook posts explode lately when people slam teachers for this kind of stuff.  Nothing should get buried when it comes to someone who is overseeing students.

I have to wonder how much pull a school district has that can make newspaper articles disappear as well as Facebook posts. 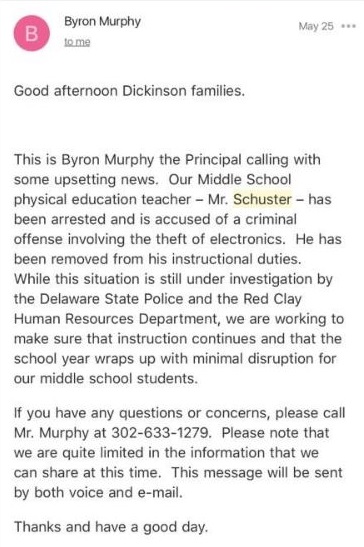