For over two years, Delaware citizens wondered why Kathleen Davies was put on leave by Delaware State Auditor Tom Wagner.  Now, finally, the truth can be told. END_OF_DOCUMENT_TOKEN_TO_BE_REPLACED 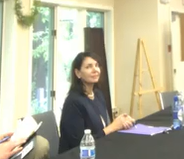 Who is Kathy McGuiness?  Yes, she is running for State Auditor.  But who is she really?  Is she true Blue or is she Red for convenience sake?  Who are her best friends and why would that make it VERY dangerous for her to win this election?  She wants to be a state auditor.  Someone whose job is making sure other state agencies don’t break the rules.  But her alliances and allegiances beg the question and puts her on a very slippery slope.  And I’m not just talking about the slopes in Park City, Utah. END_OF_DOCUMENT_TOKEN_TO_BE_REPLACED

A candidate in the 10th State Representative District uploaded a picture on his Facebook page today suggesting he had been endorsed by the Delaware State Education Association when he had not.

Former State Rep. Dennis Williams (not the Mayor of Wilmington) is running against current State Rep. Sean Matthews.  Matthews beat Williams in the Primary two years ago.  Williams is attempting to get his seat back despite a plethora of endorsements for Sean Matthews, including Sean’s endorsement by DSEA!  Today, he put this picture up on his Facebook campaign page:

When he was called out on it, he suggested it was an older endorsement from DSEA.  I would say that was a very unwise decision for Williams.  Williams also did a “side-by-side” of information that makes him look great compared to Matthews.  When Matthews voted no on the budget on July 1st, 2015, he had very specific reasons for doing so along with five other Democrats.  By even attempting to do this comparison, Williams is making a mountain out of hay.  Horrible, just horrible…

I wish candidates could run fair campaigns and instead of stating why they are better, they should talk more about what they are going to do.  And putting up VERY deceptive pictures to give a false illusion of an endorsement is fraudulent in my opinion.  Williams has since taken the cover photo down, but the posting still appears on his Facebook campaign page.  I sincerely hope he takes it down soon so voters won’t get a false impression that he was endorsed by DSEA when he wasn’t.