At the Capital School District Board of Education Committee, Dover High School Principal Courtney Voshell gave a presentation on the proposed new graduation regalia.  Traditionally, the girls wore white and the boys wore blue.  Voshell explained the rationale for the change during their board meeting:

I think it’s important to also address the fact that we have some students that gender identification is an awkward conversation for some of our students.  It’s definitely not the majority but it happens.  In the past two years that I have been leading the school, it has become a conversation where a student doesn’t want to wear one color or the other because that’s not the gender they are identifying with.  And for me, it’s just not a time we should make any student feel awkward.  This is their day.  They worked really hard for it. 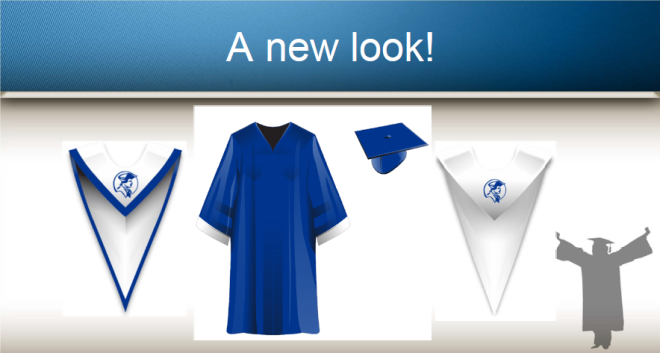 Voshell also noted this will be the first year the new Dover High School will have graduating students that attended the school all four years in the new building.  Because of this, the extra $10.00 fee for the new uniforms would be covered by the school through a student services funding bucket for this year’s graduating class.  Voshell also cited parent concerns about not having graduation in alphabetical order in the past and parents didn’t know when their child was coming up next to receive their diploma.  In the past, students tended to be set up in a stripe pattern with girls in white rows and boys in blue rows.  Beginning this year, graduating seniors will be seated in alphabetical order.

This presentation was not an action item for the Capital School Board but merely a discussion item.

Bullying.  It can be one of the most damaging experiences any student goes through.  It can cause school-wide disruption in some cases and robs students of the ability to learn.  Are Delaware schools safe?  Do they take the best steps to prevent bullying from happening?  Dover High School, in the Capital School District, is in the midst of launching an Anti-Bullying Protocol.  They will be discussing this at the Capital Board of Education meeting this evening.  Principal Courtney Voshell has heard the concerns and sees what happens when bullying happens.  This school, students and staff alike, are sick of the bullying and are saying “Enough is enough!”

Any stop bullying plan is only as good as the implementation of it.  I believe the drive to make this plan work is there, but it’s long-term outlook is unknown.  I believe it is a good plan, but I do have some concerns.  The words “students with disabilities” or “special education” are not mentioned once in the below document.  Special needs students have been the victims of bullying and have also been the agitators of bullying.  There are very specific laws, at a federal and state law, that protects these students in certain situations.  Can a school-wide plan contradict an IEP team, state law, or federal law?  If a school isn’t implementing an IEP correctly, should a student be punished for behaviors that are a manifestation of that disability?  This is a very hard question to answer and I don’t have the answer.  I am not saying this to be a Donny Downer on the plan.  I think it is excellent, and if it takes off, it should be a model for many schools in Delaware.  But I believe this is an angle they should look at.

My other concern is this: Why is this being done at a high school level and not the elementary or middle school levels?  One of the biggest complaints I’ve heard in the Capital School District is the middle schools.  Students are coddled in the elementary schools which go up to 4th grade in this district.  But then they are thrown into one school for 5th and 6th grade, and then another for 7th and 8th.  If those schools aren’t aggressively tackling the bullying issues (and they might be but I haven’t seen any plan this extensive coming from them), leaving the burden on the high school could be a lesson in futility.  I strongly urge William Henry Middle School and Central Middle School to take a hard look at this plan and try it out in their own schools.

I would say a lot of responsibility for bullying should be on the part of parents.  If they see their child participating in any type of bullying activity, they should crush it at the onset.  I always tell my son when he is crossing a line with friends or online.  Even though he has disabilities that affect his thinking at times, it is my duty as a parent to let him know what is right and what is wrong.  By the same token, when I see him standing up for others who are bullied, I congratulate and praise him.  This is just as important.  I firmly believe parents need to watch their children’s social media and online activities, even if they are in high school.  Things happen outside of school that may never manifest itself in that setting.  Parents or guardians need to know who their kids are hanging out with and who could be seen as a bad influence.  If they know of something going on outside of the school, I believe they should proactively tell a school to inform them of the situation.  I don’t expect the school to fix those issues, but knowing about things is half the battle.

If other schools or districts in Delaware are already using this type of bullying plan, I apologize in advance for giving Dover H.S. the credit for all this.  If that is the case, kudos to those schools and to Dover H.S. for picking up the ball and running with it.  This is what we should be doing in Delaware: finding out what truly works and emulating it so all our students can truly succeed (this is not an endorsement for Common Core, Smarter Balanced, or any corporate education reform Kool-Aid agendas).

Last night, with a vote of 5-0, the Capital School Board voted to hire three armed constables at Dover High School.  Using a model currently in use by Indian River School District, the board discussed the issue with members of the community as well  as high school and district staff.  All supported the measure with one exception: the Senior Class President.  The pool of applicants would come from the Delaware State Police.  Because of insurance and pension issues, the pool was limited.  All were in agreement that hiring out-of-state would not be a wise decision.

One of the staff from the high school gave public comment indicating the current non-armed security guard company they utilize is highly ineffective and said it is like “throwing $40.000 off the roof”.  He cited the bomb threat incident a few months ago that led to a student’s arrest.  But he also indicated there was a huge fight on the football field as students were already trying to deal with the bomb threat.  He indicated there are gangs at Dover High School.  He said they are a small group of students who cause a lot of the problems.

The Senior Class President said many students were concerned with going from unarmed to armed persons in the school.  He felt like it was a drastic leap to go from one situation to what he felt was extreme.  He urged the board to find some middle ground.  Many students, he stated, felt it wasn’t fair to have this in their school when they weren’t the ones causing the problems.

In an attempt to allay the class president’s fears concerning the presence of armed constables at the high school, board member Ralph Taylor, also a retired Dover Police Officer of 20 years, said a gun is a very last resort.  He said the last thing an officer wants to do is use a gun, but it could mean a matter of many lives in a bad situation.  Board member Sean Christiansen said he reached out to different stakeholders in the Indian River School District including their own constables, parents, teachers, and students to get their thoughts on the matter.  All felt it improved school climate and led students to a feeling of safety within the district.  Dover High School Principal Courtney Voshell had a survey where parents could rate how safe they felt their children were at Dover H.S. and over 93% felt the school was not safe the way the current safety program was set up.

The school will also retain their School Resource Officer from the Dover Police and the constables will not have arrest authority.  They will be used to diffuse situations, but as it was explained, they will not punish students if they don’t have a bathroom pass.  The contract will cost the district an additional $75,000 out of their budget which will be used from carryover funds from fiscal year 2016.  Going forward, this would be a permanent part of the district budget.  The constables will be employees of the district.  They will receive professional development on all areas of school safety.  The details are not flush yet, but there was discussion if the training would come from the current Indian River Constables or the Dover Police Department.

I asked the board how the recently passed Senate Bill 207, which would not mandate schools to call the police every time a physical assault occurs unless it is considered to be a crime, could affect this decision from a financial perspective.  The bill, not yet signed by Delaware Governor Jack Markell, would give schools and parents discretion to contact law enforcement in those events.  Superintendent Dr. Dan Shelton said the current school resource officer currently deals with crimes in the school so it would not change things.  Certain school crimes such as drugs or weapons, would still result in an arrest of a student.  Shelton said another bill (the restorative justice bill) didn’t pass but if it does in the future it would give the district additional funding to deal with school climate issues.   I also asked if the constables would receive special education training for students with disabilities.  Shelton said they would, but not on an individual basis.

The board was so impressed with the Senior Class President, board member John Martin invited him back up to the podium to discuss student concerns in greater detail.  Board member Christiansen invited him to come to every single board meeting.  It was also conveyed they wanted him to be a part of the hiring committee for the constables and Christiansen told Voshell he expected him to be excused from class those days.  Voshell jokingly answered that would be a summer school excuse which drew laughter from the audience.

The special board meeting, held just for the purpose of this decision, also had another activity.  Elected board member Dr. Chanda Jackson was sworn in by board President Matthew Lindell.

While I wrote some very negative things about the district almost half an hour prior to this board meeting yesterday, most of which concerned their Strategic Plan and joining the BRINC Consortium, I felt this board meeting was a very honest and open discussion about a very serious issue.  The district was honest about the issues happening at Dover High and didn’t try to whitewash the gang activity.  After the meeting, I happened to be speaking to a board member from another district that deals with similar issues as Dover H.S. but they said their district would never openly talk about these kinds of issues in their schools.  We both agreed that issues can’t be dealt with until they are acknowledged.  So I salute the Capital School District and Board for tackling this decision.