The State of Delaware stole the Delaware Autism Program from the Christina School District when no one was looking.  With an almost imaginary and very vague loophole in recent legislation, the Delaware Department of Education is now in charge of DAP.  But not so fast… END_OF_DOCUMENT_TOKEN_TO_BE_REPLACED

Senate Bill 116, introduced today, would require a three-year exemption on prevailing wages for school construction.  It would also require public schools to give a cost study to the Controller General’s Office.

I find it very interesting they chose school construction for this given the audit that came out last week against Sussex Technical School District.  If there is some secret deal or compromise to pass the state budget, this would be the key legislation the Delaware Republicans have been looking for.  Don’t count it out until everyone goes home on July 1st.  Strange things happen the night of June 30th and the early hours of July 1st.  A bill could be dead, and presto, it has a suspension of rules.

I would have to image the unions are already opposing this bill.  Call me crazy, but I would guess they aren’t strong supporters. 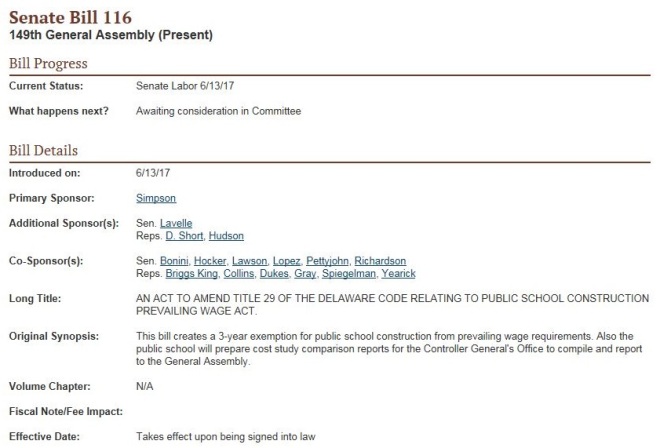 Last Friday, Delaware State Rep. Earl Jaques responded to a post I put up on Facebook concerning the Delaware State Auditor’s office.  One of his replies was news to me as well as everyone else I asked about this reveal. END_OF_DOCUMENT_TOKEN_TO_BE_REPLACED