Holy stacked agenda!  Could they squeeze anything else into this agenda?  Some more hot-button district issues?  I doubt it!

On Tuesday night, the Christina Board of Education will hold their board meeting at Gauger-Cobbs Middle School.  The fun starts at 7pm.  Bring food, and, just in case, you may want to bring a sleeping bag.  This is going to be a late meeting!

So what’s on tap?  The question is more like what isn’t on this agenda!  This is NOT the order for the meeting, but it IS the controversy order! 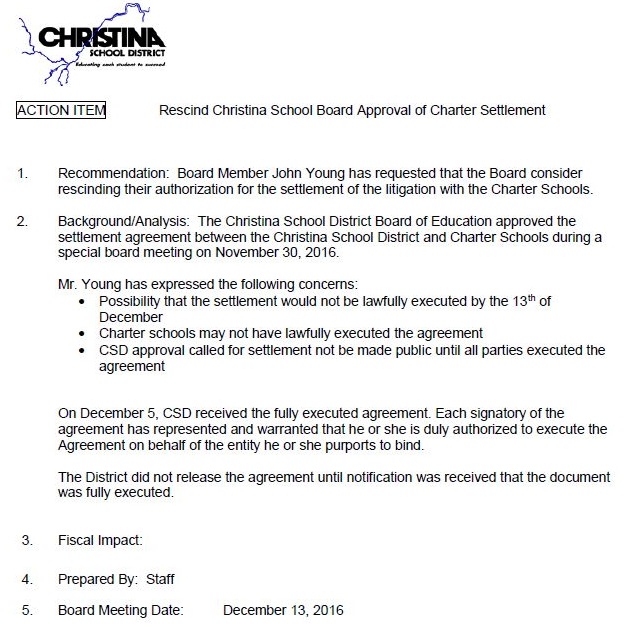 Now the cat is out of the bag.  In the absolute shocker of the year, board member John Young was the one to submit the action item to rescind the vote on the charter settlement.  John is always so quiet and compliant.  This is NOT like him at all to do something like this.  Okay, sorry, got hit in the head for a second there.  But seriously, I give John major props for having the guts to get this out there.  I truly hope one of the four board members who voted yes can see this settlement sham for what it really is.  If not, I hope many public comments can nudge them along. 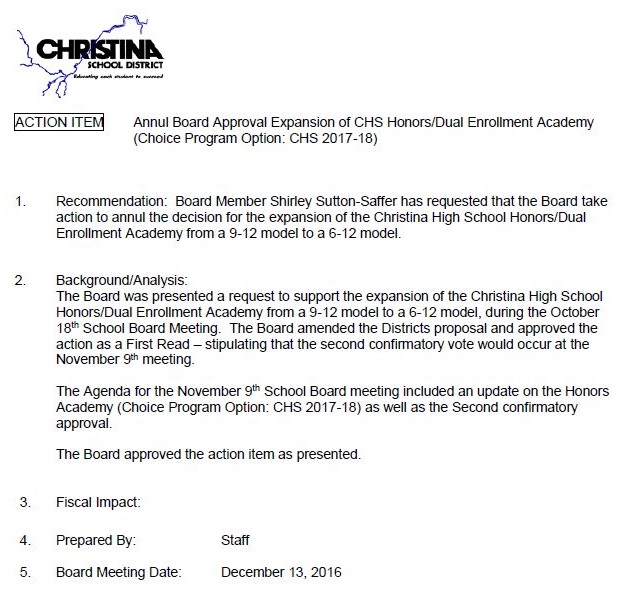 Board member Shirley Saffer introduced this action item.  After last month’s vote to create the “Honors Academy” at Christiana High School, there is an action item to annul that vote.  Saffer voted yes for the program last month, but it appears she had a change of heart.  The board voted 5-1 the first time.  Will the districts new Honors Academy survive this time?  Expect a lot of pissed off parents for this one!

While I haven’t written too much about Christina’s Superintendent search, there has been a ton of drama surrounding it.  Which will apparently culminate in many action items surrounding this.  First item on the agenda is to approve an interim Superintendent.  Which is basically what Dr. Robert Andrzejewski has been for the past 15 months.  I really don’t know the difference between Interim and Acting, nor do I truly care.   But “Bob A” is leaving on December 31st, come hell or high water.  Even if the board does approve a new Superintendent by the end of the year, that person will most likely have to give notice at their current job.  Unless it is Jack Markell.  I heard he is going to be VERY available pretty soon.  Just kidding on that one.  I do NOT want to be responsible for that rumor starting.

Action Item #8 is the Superintendent Interview Questions.  Which the board is making public.  Because they HAVE TO.  After that there will be discussion on the final interviews for the candidates.  After the board gets through that, there is another John Young submitted action item to start the Superintendent search over.  Like I said, this meeting is going to be crazy!

We will also get a discussion on air quality at Christina schools.  This should be the lighter side of the evening!  Add in all the other normal stuff school boards do: honor roll, budget stuff, contracts, and so on and so forth.  For those keeping track, the rescind the settlement vote and annul the Honors Academy are the last two items on the action item agenda.

If you want to sign up for public comment, I would get there early.  You have to sign up to talk.  I plan on being there.  I plan on talking.  It will be marvelous, just wait!  I wonder if any legislators will show up at this meeting.  I wonder if they will attempt to talk to board out of NOT rescinding the vote on the settlement.  I dare Senator Sokola to try this!  Triple dog dare!

These are some fun predictions.  People from the audience will yell at least eight times to speak up because they can’t hear them.  President Paige will bring the gavel down at least 13 times.  George Evans will ridicule John Young at least four times.  The audience will laugh at least four times.  Someone will leave their lights on in the parking lot.  Someone in the audience will have a very brilliant idea of ordering pizza (bring cash in case this does happen and you plan to stick around for the whole shebang).  At least five people will wear ugly Christmas shirts and/or sweaters.  And last, but certainly not least, I predict at least three things will come out that the general public has no clue about.