Delaware State Representative John Kowalko requested information on how much Delaware charters are getting in minor capital improvement funding through Governor Markell’s proposed budget.  In the past three fiscal years, Delaware charters were allowed to receive $351,857 total from the state budget.  This year, Markell has an astonishing $1,587,310 allocated for charter school minor capital funding.  This is approximately four and a half times the average yearly amount.  Kowalko is not happy about this and asked to share this letter he wrote his colleagues in the 148th General Assembly.

Here is the amount of minor cap improvement money spent on Charter School facilities. This is out of a proposed $11 million in the Governor’s budget for MCI allotted for all public schools in Delaware including the many crumbling and outdated buildings in Wilmington and elsewhere.  It should not be necessary to point out to all of you that none of these charter school facilities are owned in whole or part by Delaware taxpayers and every dollar spent goes to enhancing the value of privately owned facilities. Not one penny will come back to the taxpayer if these buildings are sold or abandoned. This is an abuse of taxpayer monies and an abdication of our responsibilities to those taxpayers.

Representative John Kowalko
A voice of reason in an out of control charter friendly General Assembly!
And here are the amount each charter will get.  Of course, this is subject to the approval of the General Assembly when they pass the budget. 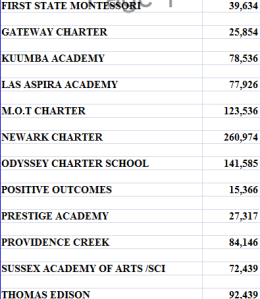 Yeah, I wasn’t too happy when I saw this either.  So aside from this surplus funding which was not part of the original charter school law but got added in to House Bill 165 in 2013, charters also get funds from the charter school performance fund, the charter school transportation slush fund, and many donations from places like the Longwood Foundation, Rodel, and The Welfare Foundation along with others.  When will the madness stop?  Kendall Massett spoke at the House Education Committee meeting last week to speak against House Bill 231, sponsored by State Rep. Sean Matthews.  His bill would require charters to have all teachers as part of the state retirement fund.  Massett spoke against it stating that the original charter school bill allowed charters to have extra flexibility from state bureaucracy.  But apparently when it benefits the charters, they don’t speak out against that…