At the first official meeting for the Delaware Dept. of Education/Rodel created Guiding Coalition for Competency-Based Learning, an email went out to members to research an organization called Reinventing Schools.  Theresa Bennett with the DOE sent the following email:

Bennett announces that a Kim Hanisch from the Reinventing Schools Coalition will be facilitating their meetings.  The organization changed their name because of the initials, RISC, to Reinventing Schools.  This group received their start-up funds from the Gates Foundation.  A blog called Save Maine Schools gave a very detailed description of the man that runs Reinventing Schools, Dr. Joseph Marzano.  I imagine Rodel and Reinventing Schools have a lot in common since they are both lovers of competency-based education and personalized learning in a digital classroom.  Oddly enough, Reinventing Schools does not list Delaware in their map of schools and districts they work with.  I guess non-profits don’t count as true education centers of learning!  Save Maine Schools referred to Marzano as just another corporate education reform snake-oil salesman.  His ideas, according to the article and commenters, were nothing new but repackaged to further this modern-day Competency-Based Education mixed with Personalized Learning in a digital environment.

As I mentioned in Part 1 of this series, a lot was going on in Delaware education at this time.  The priority schools debacle was heating up.  On the same day as this first meeting of the “Guiding Coalition”, the Christina and Red Clay Consolidated Boards of Education were holding meetings to decide their next steps with the Delaware DOE and Governor Markell.  Red Clay indicated they would capitulate with the DOE, but Christina was defiant and insisted on writing their own Memorandum of Understanding with the DOE.  The priority schools MOU called for the firing of half the teachers and each school had to get a new principal.  As teachers and Delaware citizens seethed, a growing voice was calling for the resignation of Delaware Secretary of Education Mark Murphy and a new employee at the DOE named Penny Schwinn, who led the Accountability & Assessment department, soon became the most hated person in the Delaware education landscape.  Many, including legislators, began wondering what the heck Delaware did with all the Race To The Top money and FOIAs started going out to the Delaware DOE.

As a result of this, the Wilmington Education Advisory Committee was born.  Governor Markell issued an Executive Order to come up with recommendations on how to deal with the rising Wilmington education crisis.  Bank of America Communications Chief  and Former Chair of the Wilmington Metropolitan Urban League, Tony Allen, was chosen to lead the committee.  Meanwhile, a certain blogger started talking about Delaware Opt Out more and more.  All of these were easy distractions for those who were very worried about what was going on with Delaware education.  Markell was taking a very hard stance on the priority schools.  Nobody saw what was going in with the back-door and secret meetings of the Guiding Coalition.

The Rodel Foundation of Delaware was busy preparing for their next Vision Coalition annual conference.  One of their guests at the conference was a company called 2Revolutions.  I did not attend the conference, but I followed along on Twitter.  I decided to look into this digital learning company and was shocked by what I found.  Pretty much everything I am current writing about with Corporate Education Reform 2.0 is covered in that link.  That was from almost two years ago.  The next day I received an email from the Governor’s Advisory Council for Exceptional Citizens (GACEC): 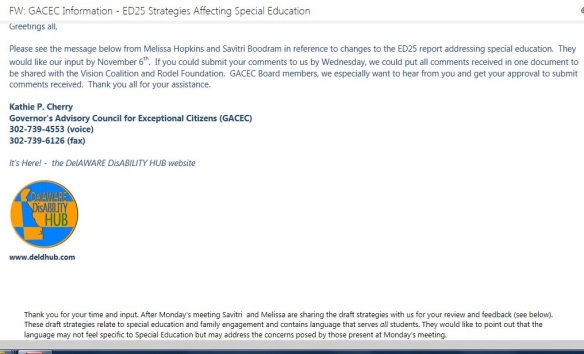 This email contained a copy and paste from the Rodel Teacher Council for their “Performance Learning” blueprint which I included in an article I wrote on this.  I was skeptical of Rodel based on everything I saw and read before that email from the GACEC.  But this horrified me.  It was obvious Rodel was facilitating the reinvention of Delaware education and nobody was paying attention.  Changes were taking place.  The Delaware DOE was not running the show.  It was Rodel.  I began to commit myself to finding out all I could about Rodel.  It was Halloween and nothing horrified me more than what I wrote about that dark evening.  I didn’t truly understand it all at that time.  There was a lot going on.  But this was the beginning of putting the puzzle pieces together.  However, the upcoming General Election in Delaware would cause things to change in the Delaware General Assembly that would provide very big distractions for many.

As everyone prepared for a potential takeover of the Priority Schools, the Delaware DOE and Rodel continued their secret meetings.  To be continued in Part 3: Rodel gets a surprise and a matter of civil rights…