As part of their audit investigation with the State Auditor, the Superintendent of Indian River School District and the Director of Personnel told the Auditor of Account’s Office there had never been any formal complaints against their former Chief Financial Officer, Patrick Miller.  They lied.  Warning: some of the language used by Patrick Miller in the parent’s complaint is NOT SAFE FOR WORK.

In 2013, during Indian River’s School Board election, Patrick Miller and his brother, Stephen Miller, verbally abused a parent in the parking lot.  The parent called the State Police and filed an official complaint with the district.  The parent has agreed I could share this information provided I take out her name and those of her children.  I took out addresses and personal identifiable information for her and her children.  As well, I took out personal phone numbers, birthdates, and addresses for all parties.  I still have the original documents without the redacted information as do others.

The school board race was between Leolga Wright and Paulette Rappa.  Wright wound up winning the election with 578 votes to Rappa’s 119.

When the parent went up to Miller and the people surrounding him, something happened between the two of them.  Once again, this is most likely not safe for work. 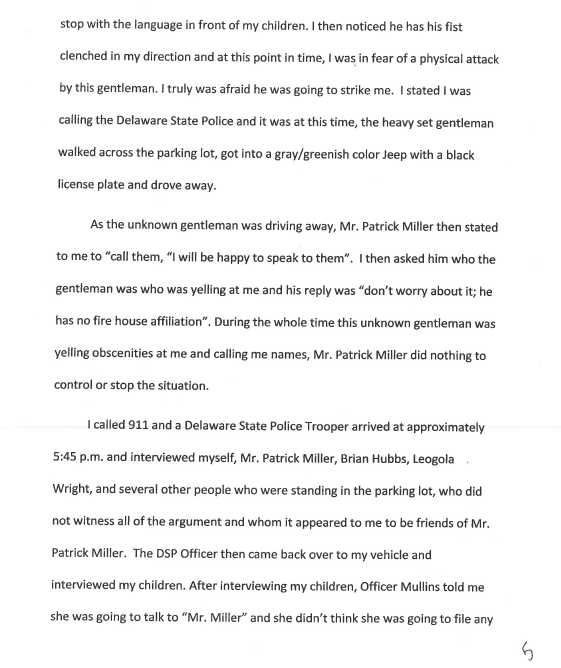 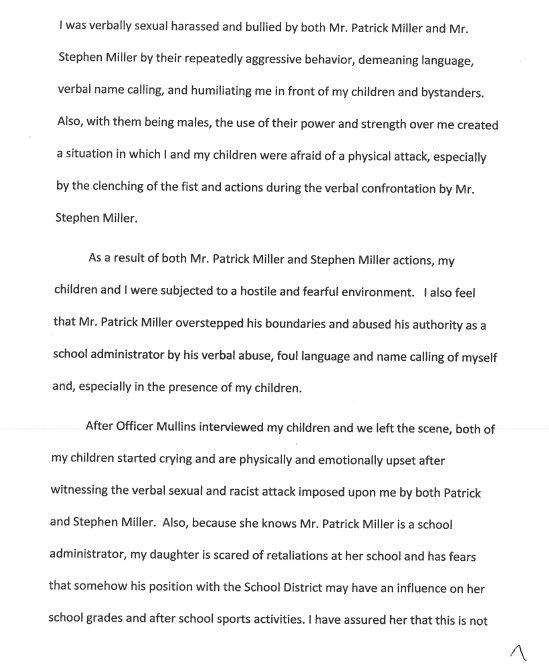 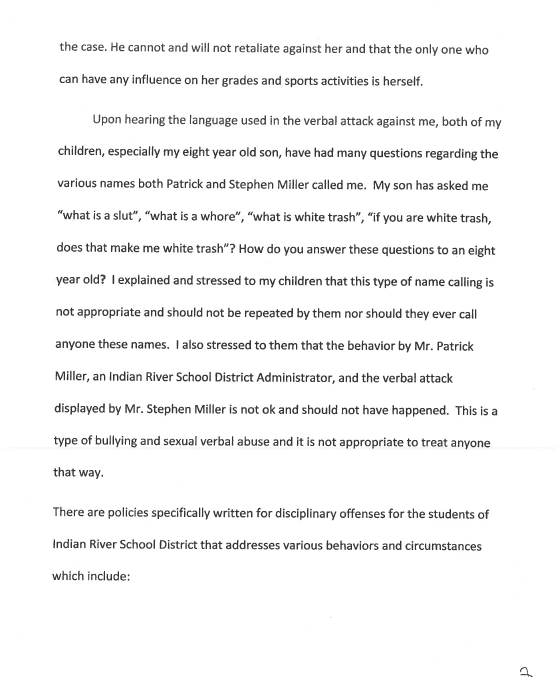 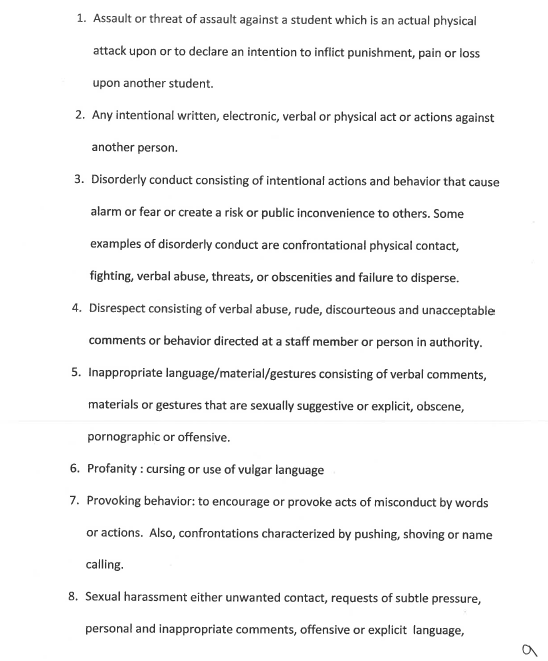 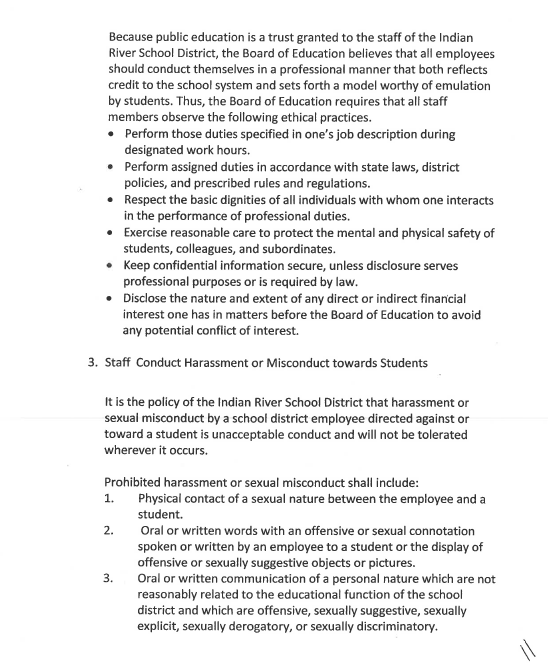 When the State Police filed the complaint, they included the parent as both the victim and a suspect.  In addition, both Patrick and Stephen Miller were included as suspects. 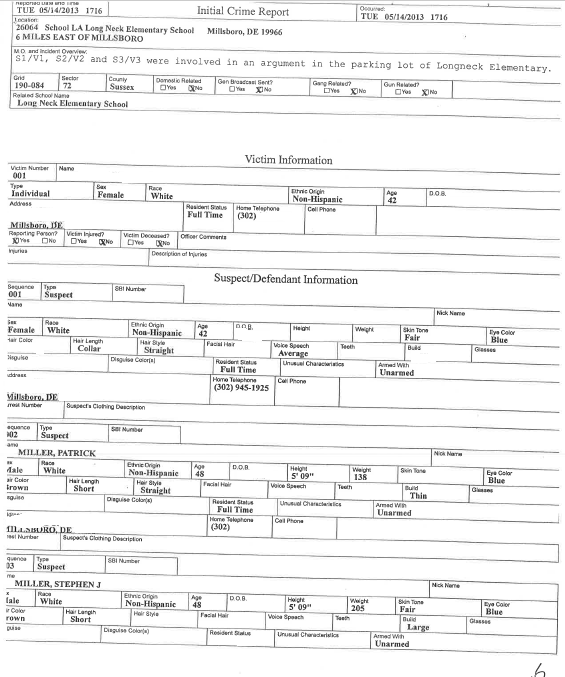 Assistant Superintendent Gary Brittingham officially responded to the parent in a letter one month after the incident took place. 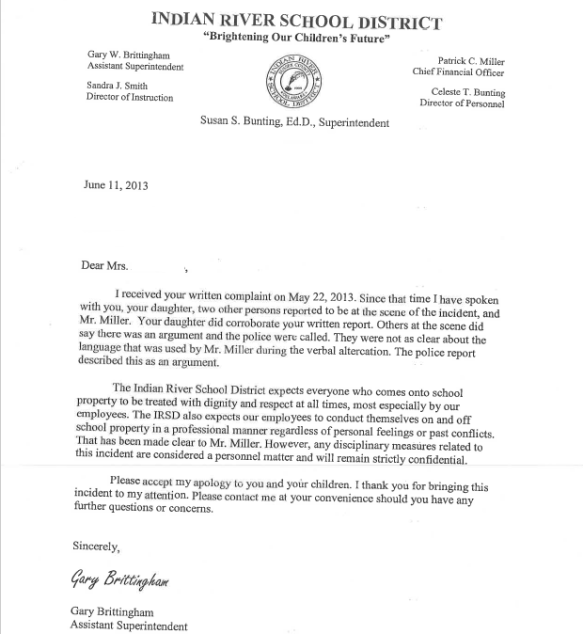 Was this complaint even in Miller’s file when the Auditor of Accounts office investigated?  Surely this would have made some noise in the district office.  This should have been enough to have Miller removed in 2013 but clearly he wasn’t.  But this becomes even more complicated.  If then Superintendent Susan Bunting lied to the Auditor’s office about no complaints ever being filed against Miller, what else has she lied about?  She is the Delaware Secretary of Education.  She was hand-picked by Governor John Carney to lead public education in Delaware.  What other complaints about Miller are out there that nobody knows about?  How deep did the cover-up go?  Bunting lied to the auditors during an official investigation into the district she was hired to oversee.  It is not a coincidence this occurred the same time they announced they would be going out for a referendum.

No charges have been filed against Patrick Miller since the Audit Investigation Final Report came out in November, 2016.  I contacted Delaware Attorney General Matt Denn’s office yesterday to inquire if there was still an open investigation.  They would neither confirm if one was open or even if there was an investigation.

This is my quandary and it is certainly up to readers to question the same thoughts I have.  Was there a cover-up or deal for no charges against Patrick Miller?  Was there some type of trade-off for Susan Bunting becoming the Delaware Secretary of Education?  Carney’s people were well aware of what was going on in Indian River at the time.  Miller is still walking free and is in a position to be around money again at the Indian River Volunteer Fire Company.

There is also the matter of Patrick Miller’s position as the Chief Financial Officer of Indian River during this incident.  Before the election, Miller wrote a letter to the Cape Gazette endorsing Leolga Wright.

This is explicitly against School Board election laws in Delaware.  District employees are not allowed to endorse any candidate for a school board election.  Multiple sources, who wished to remain anonymous, have told me Miller was admonished by the district for his public endorsement of Wright, but there was no mention of this as a complaint against him in his personnel file based on the Auditor’s report.

Wright continues to serve as a Ladies Auxiliary member with the Indian River Volunteer Fire Company as well as serving as a board member on the Indian River School District Board of Education.  As well, I pointed out the other day that Chuck Bireley, the current School Board President for Indian River, did Indian River Volunteer Fire Department’s audits until the last one in 2015.  Neither of these items were disclosed in the final report from State Auditor Tom Wagner in 2016.  Gary Brittingham retired from his position of Assistant Superintendent during the 2013-2014 school year.  He is now a realtor with Jack Lingo in Rehoboth and also serves on Indian River’s Citizen Budget Advisory Committee.

How deep does corruption go in Delaware?  When we have someone as a Secretary of a state agency, the public needs to be able to trust that person.  We also have to believe the Governor and his staff did their due diligence in selecting that person.  Out of all the articles I have written about in four plus years, this has been the most difficult.  I wanted to trust Dr. Susan Bunting.  I wanted to believe that she was above this type of fraud and corruption.  She led Indian River School District during many years while Patrick Miller was their CFO.  To say she was not aware of any complaints against him, based on this, is a bald-faced lie.  It makes me question every single decision she has made.  If she told the auditor’s there were complaints about him, it would have shown her to be incompetent to let him continue on.  I have no doubt any complaints against Miller were put in a shredder before the Auditor’s office came down.

The corruption and fraud in Indian River School District still echoes to this very day.  There is no possible way Susan Bunting was shielded from what Miller did in the district.  It is my contention there was a massive cover-up of his activities, spanning many years.  And lest we forget, even Superintendent Dr. Susan Bunting was mentioned in the Auditor’s final report for having bought White House Christmas ornaments with funds meant for public education.

It is up to Governor Carney to decide what to do with this information.  I know what I would do if I were in his shoes.  But that is for him to decide.  This should not be ignored and swept to the side.  It is too big.  This is a head of a state agency.  A Secretary.  Involved in a cover-up.  Do the right thing Governor Carney.

4 thoughts on “Indian River Said There Were No Complaints Against Patrick Miller. Susan Bunting Lied.”