A Caesar Rodney School District student took his complaints against the ongoing censorship on social media concerning student walkouts.  In a nutshell, the student called out the district for going against what they have taught their students.  David Haynes, a Caesar Rodney High School senior, gave his permission for me to put his Facebook post from last night on here.

For over 13 years, I have bled blue and gold. The Caesar Rodney School District’s repeated failure to do the right thing, however, has me fed up. How dare they teach us the beauties of activism with the likes of Dr. Martin Luther King Jr., Rosa Parks, and John Lewis, only to turn their backs and ban a peaceful protest. How dare they teach us of the necessity of freedom of speech, only to turn their backs and delete and block those who oppose. How dare they warn us of evil tyrants who limit the people’s freedoms, only to turn their back and act authoritarian themselves. How dare they teach us to “speak for the silent, stand for the broken,” only to tell us to shut up and sit down. Caesar Rodney is missing a golden opportunity to practice what they preach. And yet, it seems as if there is an asterisk next to the First Amendment. *does not apply to students, they are too young to speak freely and protest peacefully. My history teachers did not teach me about THAT clause. Our superintendent believes that we should “write or call their legislators to let their opinions be known.” If our practices of freedom of speech are met with post deletions and blocks, why would he expect us to think that a legislator would listen?? I can’t speak my mind on Facebook without getting censored, how about I go to an elected official? What a wonderful plan. We live in a world in which 17 people in a school have to be killed in order for a nation to listen to their children. For years, students have been silent (or silenced) and now we decide that it is time to make a change. The district should welcome this with open arms—we are actually concerned about our country! But they are missing a chance to foster this spark of activism by threatening consequences and shutting down our discussions. School districts such as Cape and Brandywine are supporting their students’ First Amendment rights, and in turn, are encouraging future activists for a better tomorrow. I commend these two districts and regret that CR is not setting this example for the state. The country is on the verge of change to make all of our lives safer—and the movement is being led by students like Gail, Grace, Laura, and millions across the U.S who are brave enough to speak up.
On March 14th, I will be walking out of school at 10:00 am for 17 minutes—one for every person killed in Parkland, FL. I accept the consequences, but hope that the Caesar Rodney School District does the right thing and supports our movement.
#ENOUGH!

We need more Davids and less folks like the district communications guy who actually thought it was a good idea to delete public Facebook posts.  I say to that guy: this is a screenshot world sir! 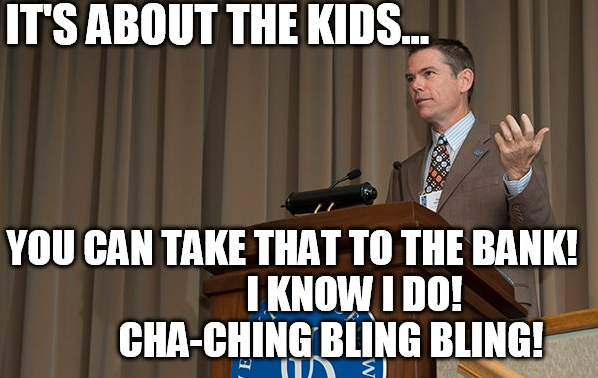 Based on their 2015 tax filing, the Rodel Foundation of Delaware Chief Executive Officer, Dr. Paul Herdman, makes an astonishing $398,000.  Keep in mind this was in 2015 so he is most likely well over that pesky $400,000 barrier.  Good lord!  I found lots of interesting stuff in this tax filing, signed off by Dr. Paul Herdman on May 12th, 2017.  As well, I looked up some of Rodel’s best friends and found TONS of information on them as well! END_OF_DOCUMENT_TOKEN_TO_BE_REPLACED