Last Friday, the final report for Delaware House Resolution #20 came out.  The General Assembly passed this resolution last July and ordered the Office of Management and Budget, the Department of Finance, and the Office of the Controller General to conduct a study on Pay For Success methodology and how it could work in Delaware.  What did the report recommend?  And who wrote it?

The report cited three examples of Pay For Success programs that took place in other states and the United Kingdom.  One of those programs was a Goldman Sachs investment in Salt Lake City pre-schools to determine how many pre-schoolers needed special education services.  I wrote about this program nearly two years ago, as did well-known education bloggers Diane Ravitch and Fred Klonsky.  I wrote:

The validity of the Utah Pay For Success program came under immediate scrutiny because of the 99% victory Goldman Sachs claimed.  Issues immediately surfaced around the reliability of the district’s data when it came to being able to identify these students for special education services.

The HR #20 report recommended Delaware pursue these types of initiatives and even suggested setting aside $5-$10 million for successful programs of this sort.  Delaware has enough problems with our budget.  I don’t believe we should be allocating critical state funds into escrow accounts to pay for a potential Social Impact Bond/Pay For Success program.  When it comes to education, we have allowed hundreds of millions of taxpayer dollars to go towards policies and programs that have not proven successful at all.  Now it appears corporate education reform wants a return on those investments and will use children as sacrificial guinea pigs to make profits.  This is the wrong way for public education.  Recently, the blog Wrench In The Gears wrote about how Social Impact Bonds will impact public education in the future.  I’ve written about them several times.  Should Delaware let this go through, it is just one more step in the destruction of public education.  You know, all those pesky things I’ve written about in the past three years where folks told me I was wearing a tin hat and going on one of my conspiracy theory rants.  Yeah, I’m the nut…

To read the report, please see below but an even bigger question is asked right after that!

When I read the report, I did a right-click on the PDF to see who authored the report.  I was shocked to see it was Governor Carney’s Policy Director, Albert Shields.  The House Resolution did not ask the Governor’s staff to write the report, it asked others to write it.  So why did Shields write this report?  I contacted Shields via email earlier today but I have yet to receive a response. 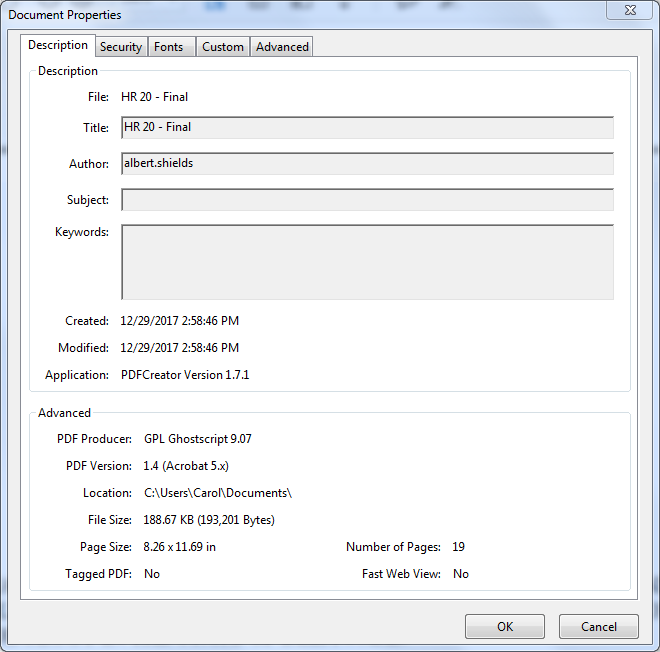 I had the House Resolution #20 final report on Pay For Success Methodology forwarded to me.  I noticed the authorship of the report was attributed to you.  I was curious how that is since you are the Policy Director for Governor Carney.  The resolution directed the Office of Management and Budget, the Department of Finance, and the Office of the Controller General to write the report.  I would assume the report, given to the Governor’s office, would then be looked at for potential policy initiatives stemming out of it.  So my question would be why you wrote the report and not the above-mentioned parties.

As well, the report mentioned the “success” of the Goldman-Sachs Pay for Success program in Salt Lake City, Utah.  That particular program which determined only one student needed special education services was met with tremendous scrutiny and controversy.  The heart of those issues surrounded the actual student population and their demographics as well as the validity of the final decisions rendered for that group of students.  I find it disheartening that this report does not acknowledge those issues while presenting the Salt Lake City program as an example of a victory with Social Impact Bonds.

In my opinion, using corporations to “invest” in education like this has enormous pitfalls and red flags all over it.  Given the precarious funding issues Delaware faces consistently, year after year, I think it would be a huge mistake to hedge bets on outcomes that are not conducive to advancing the educational success of students.

Thank you, and feel free to contact me if you have any questions.

Shields has been a long-term member of John Carney’s team.  When Carney was the Delaware Representative to Congress, Shields served as his Senior Press & Policy Director from January of 2011 to January of 2017.  He was Carney’s front-man for his first Congressional election.  It appears he has been rewarded for those efforts by holding one of the top slots in Carney’s staff.  My first contact with Shields was on the day Carney announced Susan Bunting was his nomination for Delaware Secretary of Education.  I received correspondence from folks down in Indian River who were very concerned about Bunting being the pick.  I forwarded that information to Shields with no reply.

I would make one recommendation to Shields.  If he is going to write a report of this caliber which went out to the Governor and every member of the Delaware General Assembly, he should learn to spell-check.  It is Goldman Sachs, not Goldman Saks.  There is a Saks Fifth Avenue, but that isn’t even close to the same thing.  I won’t profess to be an expert speller, but I’m also not the Policy Director for the Delaware Governor either.

Why wouldn’t Mike Jackson who runs the Office of Management and Budget or Michael Morton with the Office of Controller General write this report?  That was the legislative intent.

It just seems to me like Carney will get this going no matter what.  The House Resolution is just his way of convincing legislators to pass a non-binding measure to get a report out making Pay For Success programs look good so they can pass actual legislation making it legal in Delaware.  The fact his Policy Director wrote the damn thing says a lot.  I have no doubt, should Shields ever bother to respond, that he will give some excuse as to the PDF being set up in his name or some techno-savvy answer.  I’ve seen this happen before in the Governor’s office under Markell and his underlings.  And people actually wonder why I give the Governor such a hard time.  Pre-determined results, set in stone in a Governor’s mind, and making it appear to be going through the proper steps to guide the masses into believing it is a good thing for the people of Delaware.  Some call it progress but I just call it bullshit.

If this did go through, how soon could Carney apply it to Delaware education?  Since the Christina School District seems to be high on his priority list these days, I would look there for a likely implementation of some type of Pay For Success program.  Should the Christina schools in Wilmington consolidate, it would give them an automatic reset with the Department of Education since they would essentially be new schools.  That means all those nasty testing labels such as “Partnership Zone”, “Priority Schools”, and “Focus Schools” would go away.  A perfect time to get the guinea pig wheel rolling again!  It wouldn’t shock me if Carney already has those deals lined up.  This is just a hunch on my part by the way.  Based on experience at looking at all these education policies mandated by the past two Governors of Delaware.

Delaware is going to find itself in a quagmire the more we let Governor Carney’s public-private partnership agendas go through without any true public knowledge of what these things mean.  He has done it before and he is continuing to do it.  It has become painfully obvious, once again, that John Carney represents the corporations and not the people of Delaware.  For those who voted for him, you were fooled.  He doesn’t care about you or me.  He cares about the bottom line for companies.  He is proving that more and more every day.

Prediction: In the next six months, some legislative sycophant of John Carney in the Delaware General Assembly will introduce legislation creating some Pay For Success Board to implement this whole thing.

3 thoughts on “Shenanigan Alert: Why Did Governor Carney’s Policy Director Write A Report On Pay For Success In Delaware?”