Delaware Governor John Carney hasn’t even been in his job a year and already he has managed to irk me more than former Governor Jack Markell.  Why?  Many reasons. 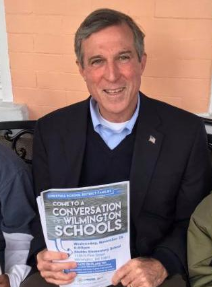 1) He looooooves to hold backdoor meetings.  If it isn’t his Family Services Cabinet Council, it is his secret meetings with Christina officials.  And the good Lord only knows what he was up to over the summer with what eventually became Regulation 225.  And lest we forget, the steering committees and everything else affiliated with his “public/private partnerships”. And if someone files a FOIA Complaint when he doesn’t care about this, he will just rescind the prior Executive Order creating it and shut out the public even more. Sure, he let this Council speak to the public last week, but that was just for appearances sake. We still have no idea what they do behind closed doors.

2) He doesn’t have his own thoughts.  Like most government leaders, he surrounds himself with those who will do his bidding.  But with Carney I see more folks directing him as to what that bidding should be.  And these aren’t the right people.  They are the Rodels and the Jon Sheehans and the other faces involved in Delaware public education who subscribe to the almighty standardized test scores more than giving schools the supports they need. His goals are based on the validity of those test scores which is why he will always fail at this game.

3) He was elected to office by what many Delawareans believed to be an “heir to the throne” mentality”.  No Democrat ran against him and he won the election.  All because he was “supposed to” win the Democrat primary in 2008.  No person should be given a leadership position.  They need to earn it, not get it by some jacked up version of default.

4) His pick of Delaware Secretary of Education Susan Bunting left many scratching their heads.  She was nominated by Carney weeks after the Delaware Auditor of Accounts office came out with a scathing report about the school district she reigned over.  While their Chief Financial Officer was the guilty party, she should have seen what was going on.  Since then, she has done some controversial actions based on what Carney wants. I haven’t seen Carney’s promise of less Delaware DOE, I’ve seen more of it. Including opening up a whole satellite office in Wilmington under the leadership of an untested assistant superintendent.

5) Whether you agree with Regulation 225 or not, the way the Governor went about it was messed up.  He allowed language into the regulation that was assuredly going to tick off many on the Conservative side of the equation.  But he went a step further and allowed many Democrats to disagree with it.  It is the black eye that is going to affect not only the rest of Carney’s term, but could very well signal an end to many Democrat legislators in the Delaware House and Senate.  Not a smart political move there John! I believe he is using this regulation as a distraction. Perhaps to get eyes away from the whole Christina plans or something far worse. Smoke and mirrors. He has become a master at this.

6) Governor Carney, like his predecessor, is obsessed with the Christina School District.  After vetoing the 5-mile radius bill, he set his sights on “improving” the district.  He held closed-door meetings with two of their board members, went to Springfield, MA to check out the very controversial empowerment zone nonsense going on there, and then persuaded the district to embark on a Memorandum of Understanding to eventually close three out of five of their Wilmington schools and fold them into two of the existing schools.  Since then, he has been on a crusade to convince community members of the East Side and West Side of Wilmington that he knows best with education.  The proposed MOU is horrible and if the Christina Board of Education passes that thing they are idiots.

7) The dude has a temper.  The tales have already been told.  He punished State Rep. John Kowalko for telling me about his closed-door meeting about Christina by refusing to let Kowalko on the Offshore Wind Working Group.  Kowalko, who had extensive conversations about this energy source, was denied membership when he should have been the first person on the group.

8) He refuses to meet with me in person.  He had a chance with me last winter.  Instead, he had me talk with Bunting and his education policy advisor.  He knows what I know.  He knew I could have been a voice of reason in his administration.  Instead, he dismissed me like a gnat.  The result is he alienated me which led to a rising tide of discontent.  He has done this with others as well.  Unless you are a part of his chosen cabal or part of his agendas, you just don’t matter.

9) His personality leaves much to be desired.  He repeats the same things over and over again.  He sounds more like an infomercial for lobbyists than his own person.  He comes across as dry and scripted. But of even greater concern is his reliance on private entities to come into the public landscape. The reality is he wants more public to become private. He doesn’t feel as though the public has a right to know things in many cases. Like we are just serfs in his kingdom. He may believe that “philanthropic” organizations are the saviors of public education, but he is dead wrong. If we have learned anything in the past 10 years it is that every single time we have let foundations and education reform companies call the shots, it has met with disastrous results. More standardized testing, more data collection, more investments that don’t reach the classroom but serve state bureaucracies with no oversight or accountability. Billions of dollars going to these companies with absolutely no substantial changes in the classroom. Except for more technology and less teacher interface. And now Carney is doing exactly what these corporations have been doing: using minorities to get their way. He doesn’t care about education plans through his beloved Blockchain, only that Delaware gets a stake in the windfalls from it. He is leading the way to chaos and destruction.

10) The guy is dangerous.  He will use anyone he needs and doesn’t seem to care about the ramifications.  He abuses his Executive Privilege just as much as President Donald Trump.  He wants to be King, not Governor.  At least with Jack Markell, he left no illusions about who he was and what he wanted to do.  But Carney plays people.  To him, his position is that of a chessboard with many pawns and knights.  He thinks he is protected by those who he aligns with, but all it takes is one bad move to put him in a position of checkmate.  If it were just him, I could handle that.  But he has left Delaware vulnerable to corporate interests over those of the people.  He would rather take money from kids in public schools than allow his corporate buddies to pay their fair share.   He has ticked off those who should be allies because of that.  It could be his downfall come 2020.