The State Board of Education had their next meeting on January 19th, 2017.  The long-awaited answer to J’s appeal was set for a vote by the six-member board.  Meanwhile, another growing threat was preparing to rear its head which would bear even more consequences for J and his mother.  This is the time when other state agencies got involved at a lightning fast rate.

J’s mother responded to Hearing Officer Dr. Thomas Pledgie’s recommendation to the State Board of Education to uphold J’s expulsion. Smyrna School District Assistant Superintendent Patrik Williams was living up to his promise from the meeting with the Hearing Officer.  He was prepared to take things as far as he possibly could with J. Who the hell is this guy?  With his allegations.  When did he become a judge (which will be the ultimate irony in a chapter or two)?  Apparently waiting for mail to deliver wasn’t enough for Williams, because two days later he sent another letter. You have to give Williams credit.  He was persistent.  This question of J’s truancy was an important one.  J’s mother was waiting on the decision from the State Board.  By all accounts, she thought the initial hearing went well.  But Dr. Thomas Pledgie’s report to the board showed a recommendation to uphold the Smyrna Board of Education’s decision.  It was a confusing time for her and J.  Not only did Williams send a letter on January 11th, but also Pamela Denney-Griffiths, the Visiting Teacher from Smyrna School District.  She filed truancy charges with the Delaware Justice of the Peace that same day. To be able to file, Denney-Griffiths would have to file what is called a Truancy Affadavit of Probable Cause. 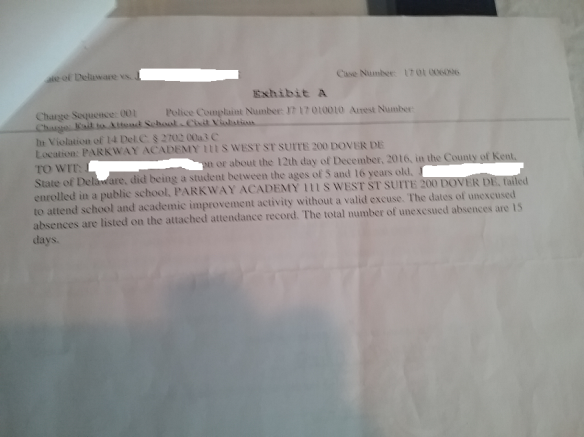 Now to the eagle-eyed viewer, Exhibit B has what I call a stack of dynamite in it.  See the part where it says “Special Educational Needs”?  With an x marked next to it?  I don’t recall J ever having an IEP.  The only time special education really came up was when Parkway Academy did their brief questionnaire with him.  I guess that is sufficient for Smyrna to send extra special education funding to Parkway.  Even though teachers and staff at Smyrna Middle School never said boo about the subject.

The paperwork was filed the next day with the Justice of the Peace.  An arraignment was scheduled for January 24th. 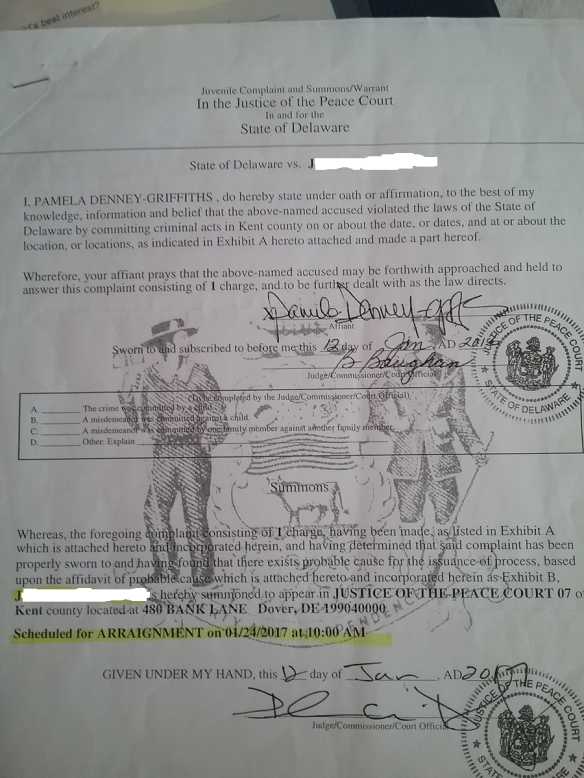 In Denney-Griffith’s defense, this was her job.  She was contractually obligated to follow the letter of the law.  While these were extraordinary special circumstances, given the appeal with the State Board, she still had to do this.  So now J and his mother had this facing them.  But the next big day for J was on January 19th.  The date of the State Board of Education meeting. But the State Board did tell J’s mother that homeschooling is an option.  So later on that day, J’s mother filed an application with the Delaware Department of Education. 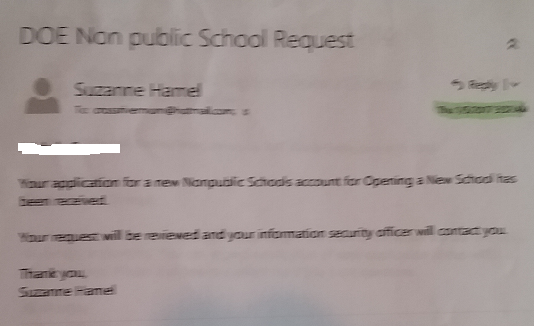 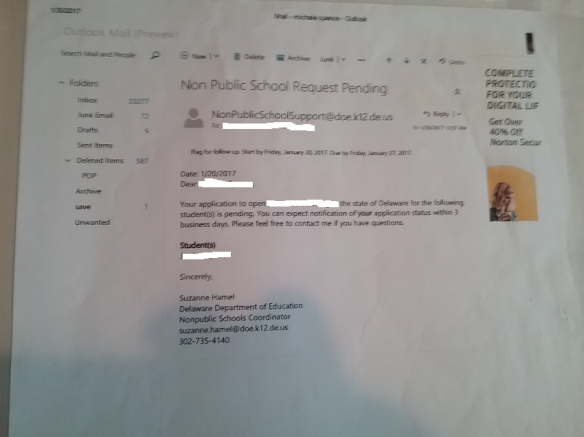 And boom! It was approved the very same day! 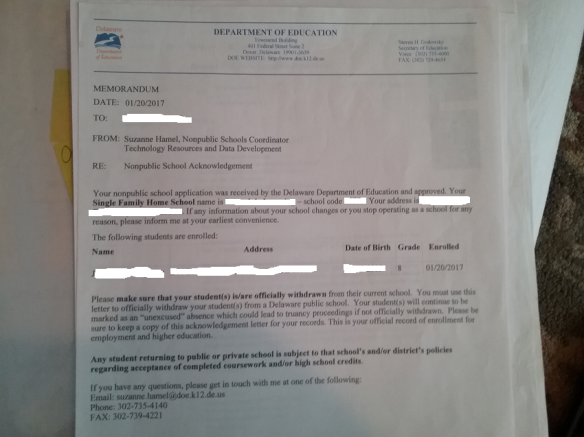 The next thing J’s mother had to do was find a curriculum for J. 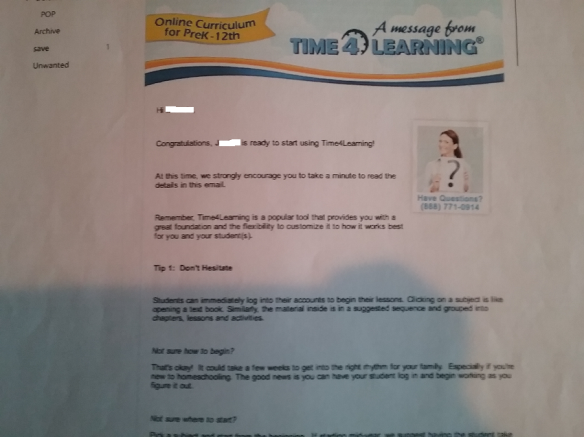 J and his mother were NOT happy with the State Board decision, but at least J was back on track.  They had to handle the truancy arraignment on January 24th though.  They arrived at the court house and J and his mother were arraigned on truancy charges.  A trial date was scheduled for February 28th.  But the bail conditions did state one VERY specific thing: 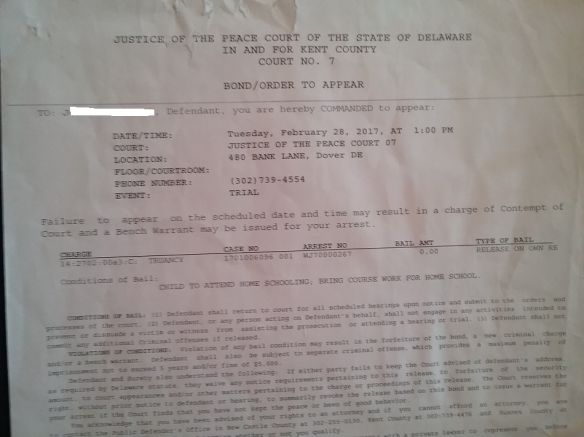 In case you missed it, it is in capital letters for the condition of bail: CHILD TO ATTEND HOME SCHOOLING; BRING COURSE WORK FOR HOME SCHOOL.  Well thank the Lord Almighty J’s mother already got that going!  Like his arrest the prior May, there was no jail time and J was released to his mother.  He is a minor!

Remember I said at the very beginning of this the Delaware DOE played a substantial role in this whole situation with J?  This happens now: 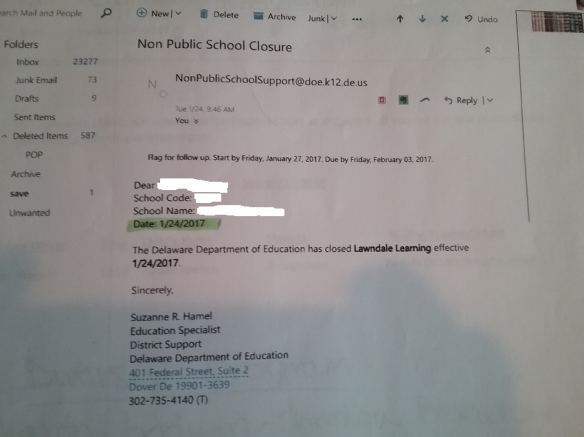 Yes, the Delaware DOE rescinded J’s homeschool certification on the same day as the arraignment even though it was a condition of the bail bond.  The Delaware DOE took it upon themselves to defy a Justice of the Peace Judge. I know for a fact the January 19th State Board of Education was Dr. Godowsky’s last meeting.  I was there.  He would have issued his decision on J’s appeal before the State Board voted on it.  He would have been there when there was the suggestion of homeschooling given to J’s mother.  I’ve had several conversations with Secretary Godowsky since he took over from Mark Murphy in 2015.  We got along very well.  I always found him to be very intelligent with a very sharp memory.  I will leave it at that.

Once again, the deck was stacked against J.  No matter how J’s mother fought for him, there was an obstacle at every corner.  She couldn’t homeschool.  She would not send him to Parkway Academy.  Godowsky would be no help thanks to Valerie Dunkle’s unique spin on events that happened but never did.  Apparently the Department of Education felt they had more power than a judge.  At first it was just the Smyrna School District, but now J and his mother were up against the State Board of Education, the Department of Education, and the Delaware Department of Justice.  Something had to give…

To be continued in Part 9: The story concludes followed by a very special announcement!