Consider this a glimpse into the future.  This picture won’t make any sense now, but it will later.  This is an end result of a battle that has gone on for well over a year and a half between a student at Smyrna Middle School and the district, led by now Superintendent Patrik Williams, and their refusal to bow down from zero tolerance policies in the district.  This is ugly, but it doesn’t stop at the Smyrna School District.  It gets bigger from there and involves the Delaware Department of Education, the State Board of Education, the Department of Justice, the police, and the Justice of the Peace in Delaware.

This story will shake a lot of people to their core.  When I first heard it I almost didn’t want to believe it.  How grown adults attempt to do everything in their power to destroy a student’s life is beyond me.  I can’t fathom it.  Power corrupts.  These are school and district leaders throwing a kid to the wolves.  This is unacceptable.  I once wrote about Patrik Williams in an article concerning a regulation about school discipline.  He wrote a letter to the Delaware DOE when he was the Assistant Superintendent.  At the time I thought it was the funniest thing I had ever read, but in light of this case I find it utterly appalling and disgusting.  This is a case of an authority figure abusing his power to the utmost degree to bring a child down.  At a time when zero tolerance policies in our schools is getting a second look, we have this man essentially planting his feet in the ground and refusing to bend.  Even when a judge tells him to.  Williams along with the Smyrna Board of Education were where this case should have ended.  Instead we have a middle school student as the victim of not just the district but also attempts to go after the family the bigger it got.

If we want to look at zero tolerance, I have none for supposed leaders of our schools who walk around thinking they are infallible and their word is the law.  What was done to this family, particularly the student, is sad beyond belief.  It does involve a sensitive discipline issue and I will be writing about that.  This is all done with permission from the student’s mother.  It is time for the sun to shine on his story.  We need to stop allowing schools to bully students and parents.  I will tell this story, no matter what.  This child has a voice, and I have been selected to be his voice.  We have laws for a reason, and Delaware is no exception.  Our legislators can create loopholes in state code designed to shut people up or to cater to school districts over student due process rights, but transparency will rule the day. 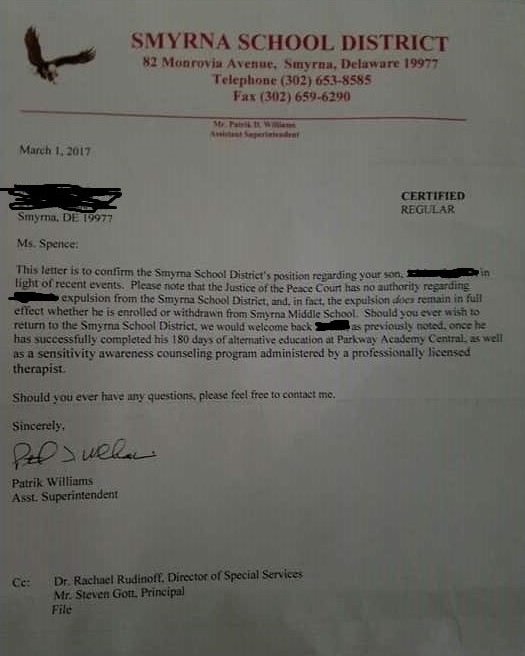