All relationships have their ups and downs.  Such is the case between former Kilroy’s Delaware commenter Publius e decere and former Pencader board member and current Christina board member Harrie Ellen Minnehan.  Throw in a wild card like Henry Clampitt, former board member of Charter School of Wilmington, current board member at Gateway Lab School, and also a candidate for the Red Clay Consolidated Board of Education, and you have what I like to call a bizarre love triangle (which just so happens to be an awesome tune by New Order).  But what I found this morning… that brings this triangle to a whole new level…

In writing this article, I must draw attention to an article I wrote a year ago.  Everything in this article is based on the assumption I made in that article.  I received a roasting of epic proportions based on that article.  This has been verified and reverified by many Delaware citizens over the years.  I would encourage Clampitt to make this fact known.  It is, as he so fervently believes, a matter of choice.  But the sign IS on the lawn at this point Emperor Publius and the truth must come from you.  I feel it is my responsibility as an advocate for public education to let the taxpaying citizens know ALL the viewpoints of potential board members in their schools.

Publius and Minnehan didn’t get along too well a few years ago.  Clampitt tried to help out Pencader when they were going through their eventual closure.  Minnehan was on their board.  Publius wanted teachers fired at the priority schools.  Minnehan did not.  Clampitt spoke out in favor of the MOU for the priority schools at Red Clay board meetings.  Publius was in favor of it as well. 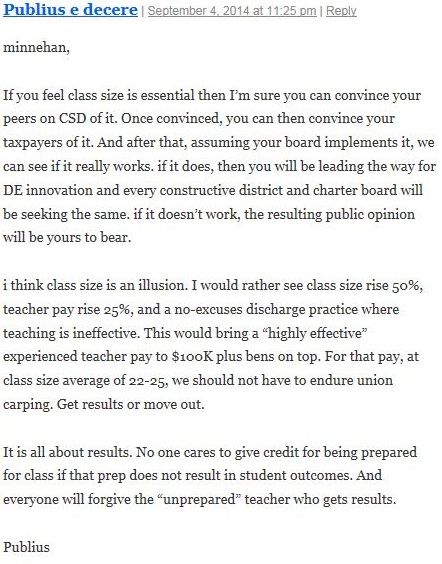 Publius obviously had no love for Minnehan when she ran for the Christina Board of Education in 2013:

Publius even thought the obituaries in the News Journal were something of interest shortly after Minnehan won the Christina board seat:

Minnehan snapped back at Publius regarding a post Kilroy wrote about good old Publius:

That seems like a lot of animosity between an “anonymous” commenter and a woman who served as President on the board of a failed charter school.  The roots of this seem to be reflected in the public comments sent to the Delaware Department of Education during Pencader’s formal review.

This is vastly different from his stance on Minnehan a few years later: 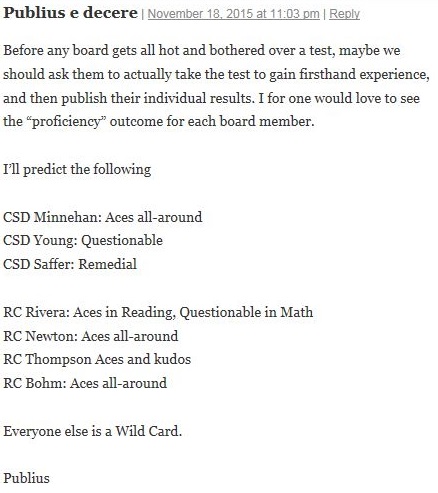 Wow!  Way to diss board members in the two biggest districts in the state!  But the ass-kissing Publius shows towards certain board members is plainly evident.  While this hasn’t been officially published anywhere, my flies on the wall have told me Red Clay board members Thompson and Bohm want Clampitt to win the Red Clay board seat.  Which I find very puzzling given Bohm’s adamant resistance to keeping the Redskins name for Conrad:

But what about Publius’ complete 180 degree change in direction for Minnehan’s time as President of Pencader? 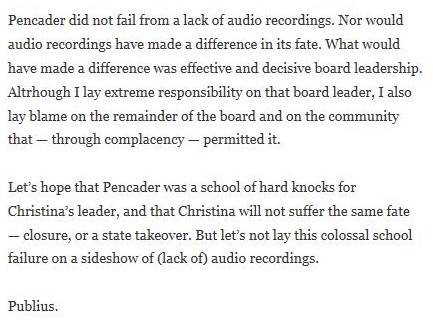 It seems like Publius had a change of heart regarding Minnehan.  Keep in mind this was AFTER Henry Clampitt “resigned” from the board at Charter School of Wilmington.  What changed between the 2013-2014 school year and the 2015-2016 school year?

For some reason, Publius became very enamored with the Christina School District.  We see this as well in Publius’ comments after Christina won their referendum in March of 2016.

What unifies this eclectic group of people?  The answer to that is quite simple: hatred.  They all seem to loathe one person in particular, Christina Board member John Young:

Let’s see, Publius is touting Bob Andrzejewski as the Messiah of the Christina referendum last year along with the “A-Team” he created.  During Red Clay board meetings, it is very interesting to see who Clampitt hangs out with.  One of those folks is on the board of Gateway Lab School.  Which Clampitt joined, coincidentally (ahem), the same time Publius gave up commenting on Kilroy’s Delaware last summer.  From what I hear, Clampitt promised the Gateway board he was not running for the Red Clay board.  Special education was always Publius’ weak area, but Clampitt assuredly had to learn a little bit about it serving as a board member for Gateway.  Promises… don’t mean a lot unless you keep to them…  In any event, Clampitt had one of his buddies come to a Gateway board meeting to help them out last fall.

Let me put this out there right now.  This is entirely opinion on my part.  I have always believed there is this enclave of folks up in Wilmington who are determined to support certain people and go against others.  I don’t understand the inner workings of this group because they are so diametrically opposed on certain issues.  But it is there.  While it isn’t an “in your face” group, I believe they communicate constantly and support each other to their own benefit.  It hasn’t even been 48 hours since Minnehan wanted the Christina board to give up local control.

Interesting tidbit: when the Red Clay Education Association decided to endorse Red Clay candidate Ashley Sabo for the upcoming school board election, Clampitt issued a “press release” indicating he supports the local teachers union.  Very interesting “Jed”!  Especially given Publius’ many anti-union rants over on Kilroy’s dinner table!  Especially this one in regards to the priority schools:

Back to Minnehan and Clampitt, I find it VERY interesting what I found this morning.  The other night at the Red Clay Board of Education meeting, Clampitt was seen putting his campaign signs across the street from the school before the meeting.  Certainly his legal right to do so.  Nothing wrong with that.  And while donations are not illegal by any means whatsoever, I have to wonder why a Christina School District board member would donate $440 for campaign signs to Clampitt.

I can’t reconcile the fact that Minnehan, who doesn’t even live in the Red Clay district, would donate $440 to Henry Clampitt.  Why?  After all the vicious insults he gave her over on Kilroy’s, why in the world would she financially support him?  What is the catch?  It can’t be because of his love for charter schools could it?  While it is extremely generous of her, I have to wonder what the motivation is.

I have grave concerns with someone like Clampitt running for a school district board seat.  He is far too embedded in the charter world.  While none of that activity would prevent him from running for a board seat, it should dissuade voters from saying yes on election day.  I think it is impossible to serve two masters and it is my contention Clampitt would serve his former master over the current master should he win.  He does have some good ideas, but I also believe he has an agenda which does not conform to the needs of the biggest school district in the state, just a very small pocket of that district.  People don’t change that much.  His thoughts that came out about Red Clay, their teachers, and the Delaware DOE making smart choices about Red Clay schools beg citizens of Red Clay to vote no on school board election day. 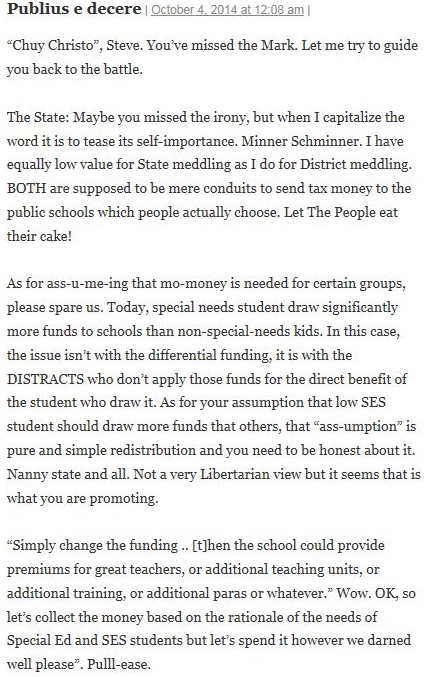 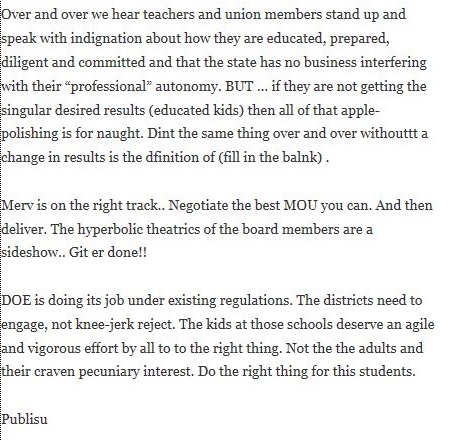 Now all of this is assuming Publius was Henry Clampitt.  Which seems to stem from a comment thread on Kilroy’s Delaware a few years back.  It concerned Mike Matthews, a Red Clay teacher, former RCEA President, and incoming DSEA President.  Publius made a comment about Mike Matthews wearing a Rolling Stones t-shirt to an Enrollment Preferences Task Force meeting.  This prompted other commenters to wonder how Publius would know this.  They concluded Publius had to be at that meeting.  As well, Publius made many remarks around attending Red Clay board meetings.  Finding commonalities in the blogging world isn’t that hard.  Many widely assumed Publius was “Hank”.  Matthews himself addressed the t-shirt controversy in a Youtube video.

UPDATED PORTION, 6:06pm: While I still can’t find the Rolling Stones shirt thread on Kilroy’s, I did find the thread where folks figured out who Publius really was based on Publius’ own comments. The October 2013 thread is found at this link: please click me!

UPDATED WITH THE ROLLING STONES T-SHIRT THREAD, 6:53pm: I got confused.  Publius DOES talk about the t-shirts Mike wears, but the reference to the Rolling Stones tongue t-shirt can be found here: Click me too!  But his mention of seeing Mike at various school board meetings definitely planted the seed to the above link.

Delaware is filled with very unique people when it comes to education.  I just don’t like the plotting and scheming that goes on.  I don’t like seeing people in a position where you think they are serving one master but serving another.

Updated, 1:50pm: Just to clarify to readers, The Delaware PTA as an organization does not endorse any candidate based on their 501c3 status as a non-profit organization.

Updated, 6:12pm: Henry Clampitt is more than welcome to give me a call.  I don’t know if we have ever had much of a person to person conversation aside from him telling me what would make a great title for my next article at the December 2014 Enrollment Preferences Task Force meeting.  Hank, I gave one of your friends my phone number.  The ball is in your arena!

3 thoughts on “The Bizarre Love Triangle Between Publius, Minnehan, and Clampitt **UPDATED**”