Today, right now, the Delaware Senate is holding confirmation hearings for various nominations from Governor Carney for Delaware Cabinet positions.  Dr. Susan Bunting, the Superintendent of Indian River School  District, has her hearing today.  I will be following her hearing live down here at Legislative Hall in the Senate Chamber.  Dr. Bunting, if selected, would replace Secretary Dr. Steven Godowsky to lead education in Delaware. 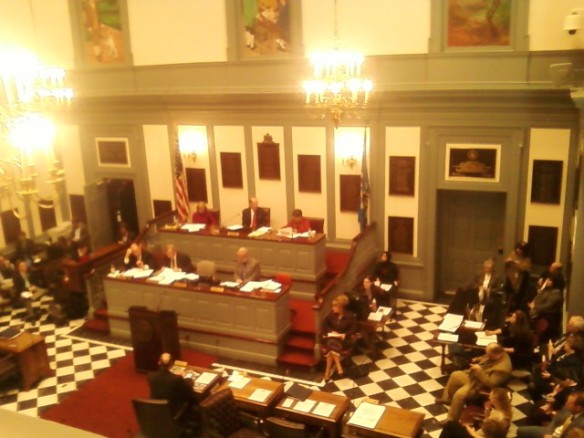 While I have been waiting for Bunting’s hearing, I’ve been listening in on other confirmation hearings.  No major drama going on.  Bunting is waiting patiently for her hearing and seems very calm and collected.  Bunting is now up.

Said she is honored and humbled to be nominated.  Has a long history of teaching Delaware.  Taught talented and gifted for many years.  Went to help all gifted students.  Became Director of Special Curriculum for Indian River School District.  Said she is on Governor’s ESSA Advisory Committee, STEM Council, SAIL After School Committee, is with Mid-Atlantic Advisory Committee, DPAS-II Committee, American Association of School Personnel, and so forth.  Advocates on Capital Hill for educational bills.  Is grateful after being in district with many ELL students and economically deprived students, she is looking forward to helping these students at a state level.  Is enthusiastic, should she be selected, to serve the students of this great state.

Senator Nicole Poore is asking about special education and the challenges as the population is growing.  Bunting responded by saying we need to zero in on the priorities of our students.  All students have the opportunity to be successful.  We have fiscal issues which could make the matter more challenging.

Senator Margaret Rose Henry is asking about funding for students with special needs and poverty students.  Bunting said we are going to have to do more with less.  She has that experience in her own district.

Senator Gary Simpson said he is a strong supporter of her nomination.  She has proven over the years that Indian River has a strong academic program.  However, he needs to ask two questions.  He has confidence she will explain him.  Based on issues of financial malfeasance in Indian River, what can she do to make sure ALL districts operate with financial transparency?  She thinks this is a major issue and will work with all districts on these matters.  Simpson asked about the ACLU lawsuit concerning special education students in her district.  She feels the Delaware DOE needs to collaborate with districts better to improve educational opportunities for these students and all students.

Senator David Sokola said, as head of the Senate Education Committee, he has worked with Dr. Bunting for years and looks forward to seeing her as the Secretary of Education.

Senator Colin Bonini said he is concerned about Delaware’s education system as a whole.  Said he was going to ask her to grade Delaware’s education as a whole but he won’t ask her to do that.  He is concerned about Delaware’s SAT scores, but he understands all Delaware students take it as opposed to other states.  He doesn’t feel our system is underfunded.  Said he is torn because everyone speaks highly of her and respects her, but he thinks our education system is failing our students.  He said there is too much talk about closing charter schools when one in five Delaware students aren’t ready to graduate high school.  He is confident in the Every Student Succeeds Act.  He wants a high standard and accountability system.  He said the other 18 Delaware superintendents are her friends and colleagues.  Wants to know what our strengths and weaknesses are how we can improve the system.  As well the relationships with her colleagues.  Bunting said she does have those relationships and feels they are a collective group.  They believe strongly in accountability.  Believes ESSA provides the opportunity to ratchet up our system.  Collaboratively, Bunting said, we are going to have to do more with less.  This gives us an opportunity to brainstorm and come up with new ways.  For early childhood, she said, we need to reach for higher goals.  We need to set high marks, reach those high marks, and get there for the sake of our students.  Bonini asked what her impression is of charter schools.  Said he is a huge fan but others in this building are not.  Bunting said we have the opportunity at the DOE to look at the charter and make sure all charters are equitable and make sure the boards of charter schools are true to that charter.  Feels the money should follow the students so all students have equal education access.

Senator Bryan Townsend asked about district consolidation.  Bunting said is looking at collaborative efforts to look at that.  Townsend asked about very different funding structure for vo-techs and wants to know her thoughts about the merits of the current vo-tech funding system when so many districts are now offering CTE programs.  Bunting said that system has merits.  She wants all students to have the opportunity to have post-high school success.  Townsend asked about the trend towards vo-tech and CTE programs.  He senses there is a lot of duplicity going on right now.  She said they can take a look at that.  She thinks many students are improving because of a strong vo-tech experience.  Townsend asked about changes at the DOE to help the state budget gap and what her thoughts are on that.  She suspects there is a need for reorganization and a look at duplicated positions.  If there are programs they no longer need and they need to examine everything very carefully.  Townsend asked for the timeframe for that examination.  Bunting said if she is selected it would start tomorrow morning.

Senator Greg Lavelle said based on her application she is glad Bunting is registered as a Republican.  Lavelle asked about her stance on testing.  Bunting feels it is necessary and said it helps students and we need it.  It helps with Response to Intervention.  Brought up the Assessment Inventory Task Force and wants to continue to look at cutting back on testing if necessary.  Lavelle asked about opt out.  She said federal law states 95% and we have to follow federal law to get funding.  She said there are situations where students need to opt out.

Senator Poore is asking about after-school enrichment programs.  Bunting said there are opportunities to blend this with different activities like art and music and looks forward to partnering with 21st Century Grants to redirect funding and provide those opportunities.  We have to regain lost learning (during summer) and get that back before they come back to school.

Senator Townsend asked about start times for schools.  Said research shows starting earlier helps students with performance and growth.  Bunting said it is an issue but we have to look at research but agrees that research does show these things.

Senator David McBride said the committee has several bills under consideration.  He said they are going to have a semi-school recess.  They should be back around 4:30pm but warned they could be late.  He recommended the public keep their seats but did say Delaware is one of the only state legislatures that allows the public to sit on the floor.

We are back in session.  Bethany Hall-Long, the new Delaware Lieutenant Governor, is presiding over the full Delaware Senate.  They are reading in new bills and results of committee meetings.  They are reading the nomination results from the Senate Executive Committee.  Bunting was referred to move forward for a full Senate vote with six on its merits.  Now we wait for the full vote.  Brief pause due to a guest on the floor from the Delaware Retired Educators Association giving a speech asking the Delaware Senate to carefully look at how budget cuts could affect retired educators.  Just had roll call.  Senate is back in session.

The nominations are up.  First up, James Collins for Chief Information Office for DTI.  We could have a little bit more of a wait for Bunting.