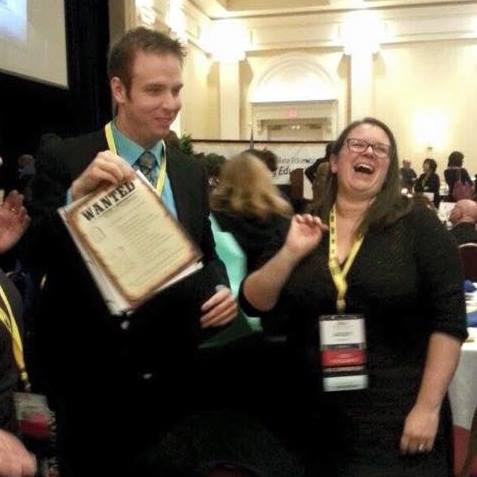 Delaware teachers Mike Matthews and Jackie Kook announced they will run as a team for President and Vice-President the Delaware State Education Association.  These leadership positions are currently held by Frederika Jenner and Karen Crouse.  Their terms end on July 17th, 2017.

Mike Matthews was the most recent past President of the Red Clay Education Association while Jackie Kook currently serves as the Vice-President of the Christina Education Association.  Both are widely known throughout Delaware as advocates against many of the destructive and disparaging policies coming out of the Delaware Dept. of Education.  The educators spoke in favor of better teacher evaluation in the DPAS-II system.  They both support a parent’s right to opt their child out of the state assessment and spoke in support of House Bill 50.  As members of their district unions, they both publicly denounced former Secretary of Education Mark Murphy and called for him to step down, which was echoed by DSEA at their next representative assembly.  Both were highly involved in fighting for their teachers, students and districts during the troubling priority school fiasco initiated by Governor Markell and the Delaware DOE.

Matthews and Kook have launched a Facebook page for their candidacy here.  DSEA members will be able to cast votes by paper or electronically between January 9th and January 23rd, 2017.  Please support Mike and Jackie.  I can’t imagine Delaware education without them.