No sooner do I receive the official word that no changes to the local cost per pupil formula will be changed than I get multiple emails with a letter from Newark Charter School Board Chairman Stephen Dressel sent to Newark Charter School parents.  This letter shows a very different take on the whole issue and alleges that Christina has been hiding funds in a certain bucket in their local funding.  The letter further states that the Delaware Department of Education approved this every single year.  That it wasn’t until this year that this funding bucket was found and corrected.  At this point in time, I truly don’t know what to believe.  While I have serious concerns with Newark Charter School’s enrollment practices and other financial issues at the school, if (and this is a very large if) what they are saying is true, I have serious questions about that as well.

I will be very clear with a few things before you read this letter.  The information presented to me from sources last week was a change in this formula, not a correction.  At no point in time until now did anyone from Newark Charter School or anyone from the charter school community present this information to me.  This is crispy fresh information that I just received.

So if there is no change, as the letter alleges, does that mean Christina will still have to pay these funds?  And who are the other districts alluded to in the letter?  Who was responsible for signing off on this at the Delaware DOE?  How does the Office of Management and Budget fit in with this?  Why did the local cost per pupil go up three times the original amount from 2013-2016 when the amount of students Christina sent to Newark Charter School only went from 1,200 to 2,000?  Those are still big mysteries in my book.  So while NCS may claim they are owed these funds, the fact remains the DOE put their stamp on it every year.  Were there earlier funding inequities going on with this formula which accounts for the huge change in funding between 2013-2016?  If this “hidden” budget was so hidden, how did Newark Charter School come to find out about this if the DOE was oblivious to what was going on as the letter alleges?  How much did Governor Markell or Ann Visalli, the former chief of the Office of Management and Budget know about what was going on with this if OMB were the ones determining the actual formula?  And is there any connection whatsoever to Kathleen Davies at the State Auditor’s Office being put on leave in May?  I do not have these answers, but my door is open for anyone to contact me on these questions.

In terms of this letter, it is written by a sole member of the Board of Directors of Newark Charter School and signed by one individual.  This letter is not from the entire board, or even on behalf of the board.

I have no doubt the NCS supporters will see this as justification for the actions Greg Meece, Joanne Schlossberg, and Dressel took last Spring.  The Deputy Secretary of Education, who the Associate Deputy Secretary of Education answers to, would be responsible for financial oversight of the Delaware DOE.  They did not meet with the Deputy Secretary of Education in the Spring.  They met with the former Deputy Secretary of Education, David Blowman, who now serves as the Associate Secretary of Education.  Blowman would have been the head finance guy at the Delaware DOE for the past few years when anyone would have signed off on what Dressel alleges to in this letter.  This is going to blow up this entire conversation all over again.  If what NCS is saying is true, then I would owe them an apology for allegations surrounding this particular issue.  I went based on information presented to me and I publicly wrote about this.  NCS or the charter school supporters could have responded in an official capacity at any time but chose not to.  But this is one letter written from one board member of the NCS board without full board approval. This letter was sent to the parents of a local education agency as defined by federal law so this document is in the public domain.

Oh, and just one more little itty bitty thing.  The creator of the PDF file was not Stephen Dressel. 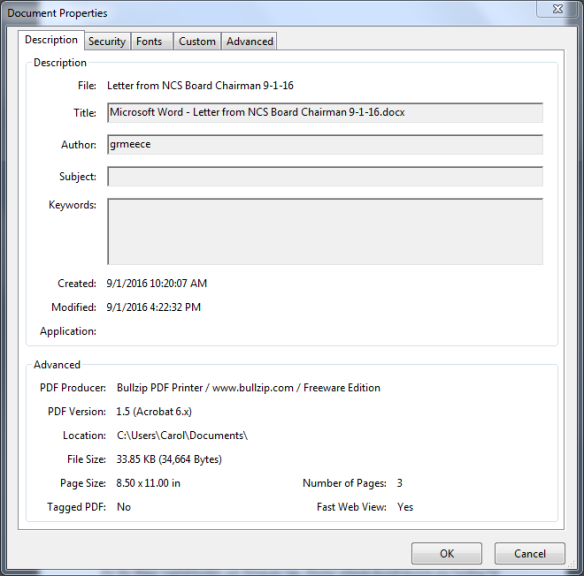