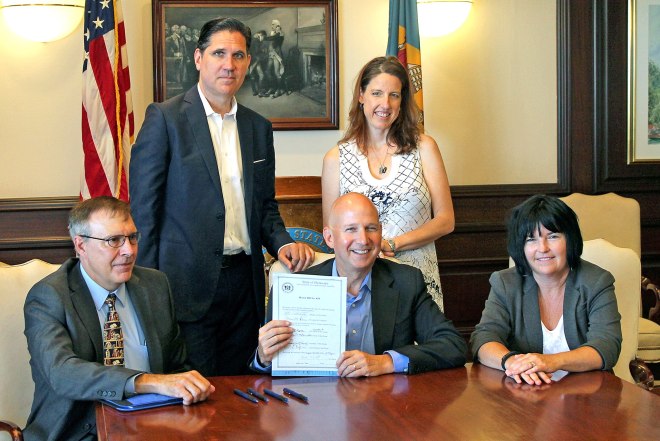 On Thursday, Delaware Governor Jack Markell signed House Bill 435, the charter school audit bill.  After 15 months of back and forth between the forces of right and the shadows of wrong, we finally have something that is better than what existed before.  It could have been better, but Kendall Massett (runs the Delaware Charter Schools Network) had to stick her nose in it and get Senator David Sokola (the only guy who isn’t looking in the camera) to mess around with it.

I’ve seen Kendall several times.  We are polar opposites on education policy.  We always say hi to each other.  She has never written anything bad about me.  I can’t say the same.  We don’t see a lot of the corporate education reformers attacking people.  They have the power (or the illusion of it) so they don’t have to.  They are the ones who have a massive amount of lobbyists and political influence to get what they want.  Using Star Wars as an analogy, they are the Evil Empire, and folks like me are the Rebels, fighting the stuff they do with every fiber of our being.

House Bill 435 was a compromise bill.  Had Kendall not interfered with it, there would be a lot more transparency coming out with future audits of charter schools.  They are required to have annual audits.  But those audits miss a hell of a lot of information, as was the case with Academy of Dover and Family Foundations Academy.  We have something less than what it was meant to be because one woman couldn’t have her charter schools look bad.  If she is in the picture, charter schools will benefit while traditional public schools will suffer more in some way.  It’s a sure thing.

In this picture, we have Governor Markell’s right-hand man (literally, to Markell’s real right, and for the love of God Dave, look into the camera, you have an election coming up.  You aren’t going to get any door-knockers that way!) Senator David Sokola, standing on Jack’s shoulders is Kendall Massett, and to Jack’s far left (literally) is State Rep. Kim Williams.  Of course Jack Markell is the guy in the middle.  I have no clue who the guy next to Kendall is.  My apologies Mr. Unknown!

3 thoughts on “If Kendall Massett Is In The Picture, It’s Bad For Public Non-Charters. Period.”