Are students in Delaware getting the most bang for their buck?  How much do districts and charters spend each year?  Per student?  In Delaware, education funding is one of the most complex things to understand when it comes to who gets what and what for.  Divvied up between three main sources: federal, state, and local funding, school districts spend a lot of money to educate students.  But is everything on the up and up?  For charter schools, who don’t have the added number of buildings and staff to contend with, do they really do “more with less“?  The answers may surprise you!

Now that Fiscal Year 2016 is in the history books, I was able to find what the average cost per student is for each Delaware traditional school district and charter school.  There are a few caveats to these pictures though.  The below figures are based on what each district and charter spent as expenditures in  FY2016,  based off information provided by the State of Delaware, regardless of the revenue source.  The number of students enrolled is based on figures as of September 30th, 2015.  While that may not seem important, it plays a huge role in Delaware education funding.  When Delaware Met closed last January, all those students went to surrounding districts or charters, adding to those district and charter expenditures.  A lot of the money Del Met received was already spent so the districts didn’t necessarily receive the full “cost” for each student.  While that is an extreme situation, things like students who receive an IEP after September 30th will always add to an increase in local funding while the state does not give any more funding for those types of things.  This is just the first part of a series of articles I am working on concerning what districts and charters pay for.  This introductory article is, however, the baseline of all that comes out after. 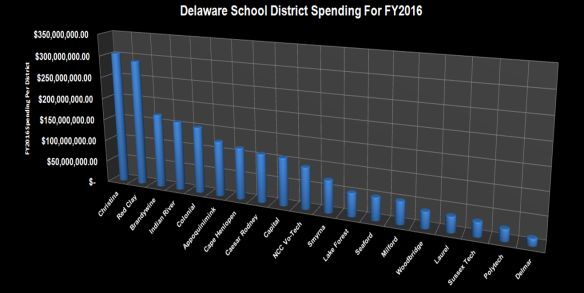 Christina is tops and Delmar is on the bottom.  Note that this does not include the special programs under Christina.  This graph tends to run parallel with the number of students in a district with a few exceptions.  For the purposes of Red Clay, I took out the number of students that attend the charter schools they are an authorizer of.  The reason for this is because each of those three charters pay their expenditures separately through the Delaware accounting system.  As well, costs associated with the New Castle County Data Center, run by Red Clay and Colonial, are not factored in here because that entity is separate in Delaware accounting.

Like the traditional school districts, this tends to fall in line with the number of students.  Two very big exceptions are Gateway Lab School and Positive Outcomes.  Both of these charters predominantly serve special education students.  Newark Charter School is the biggest charter school in the state, thus they spend the most. 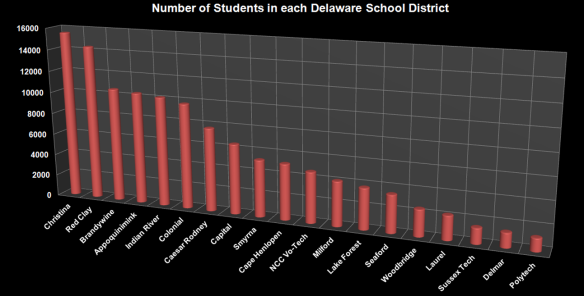 Once again, as noted above, Christina technically has more students when you don’t account for  the three charters in Red Clay.  Note the number of students in Cape Henlopen and the vo-tech schools.  This plays a big role in understanding the below pictures.

Many of these charters tend to be the older charters in the state with a few exceptions.  Note the very last charter school on this list: Positive Outcomes.

This is where things change rapidly.  Just being the biggest district does not mean you spend the most per student.  That designation goes to Cape Henlopen School District.  A lot of that comes from their local funding.  Citizens in Cape Henlopen rarely say no to a referendum.  The citizens of this area don’t seem to mind paying more for the education of students.  I was actually surprised in the Appoquinimink numbers.  The fourth largest district seems to pay second to the least amount per student.  Note how most of the vo-techs spend per student.  Taking the 2nd, 3rd, and 5th place out of the 19 school districts, they are the only ones that are not funded in the same way.  For vo-techs, there no referenda.  All of their funding, aside from federal funding, comes from line items in the budget.  There appears to be a greater benefit for this funding method for the students at these schools.  For districts like Red Clay, Christina, and Capital, they have some of the highest number of low-income students in the state.  Capital’s low-income population is at 51%.  That aspect alone gives these districts additional federal Title I funding. 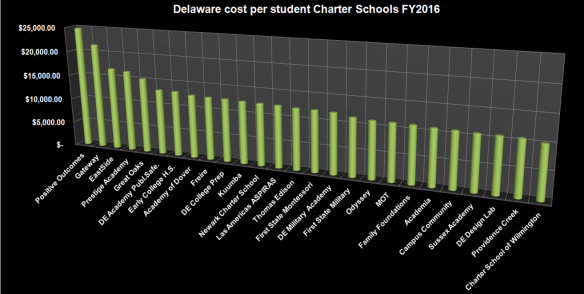 Positive Outcomes spends the most per student even though they have the least amount of students.  Like Gateway, the bulk of their population is students with IEPs, so this drives up the costs associated with that population way up!  Charter School of Wilmington comes in last, but they also get a few perks the other charters don’t.  They share their school with Cab Calloway School of the Arts in Red Clay.  They have a very sweet rent payment to Red Clay.  As well, a lot of the services they share with Cab students don’t cost extra for CSW as they would in other charters.  CSW has the lowest amount of low-income students and students with disabilities in their student population by a very big margin compared to the rest of the state.  So in some respects, they should have the lowest per-student funding.  Great Oaks, which just opened this year, has a very high cost per student compared to their peers.  I have to wonder how much unused space they are renting out in the Community Education Building in downtown Wilmington.  Delaware College Prep, which closed their doors on June 30th, won’t be on this list next year.  Many charters received modifications this year for an increase or decrease in their enrollments, so expect a lot of these numbers to change in a year.

To answer the boast of Kendall Massett with the Delaware Charter Schools Network of “charters do more with less” is not an easy thing to do.  Judging by the above graph, we can’t say that for every charter school.  As well, we don’t even know how much goes towards each of the many coded allocations of expenditures for Delaware schools.  It can be done, but the average citizen is not going to do that.  We can say with certainty there is absolutely no consistent way schools pay their expenses.  Yes, there is a guide all districts and charters are expected to follow, but very few, if any, do it by the book.  To try to fix this and properly code each transaction into it’s correct coding group can be done.  It would take years to do for each fiscal year.  Furthermore, there are a plethora of different factors that affects the funding a district or charter gets: how much experience teachers have, the populations of high-needs students (students with disabilities, low-income status, English Language learners, etc.), even down to their transportation funding.  The bigger the district, the more administration they have.  This plays a big factor into expenditures.  But there is also, what I view, as wasteful spending.  Things that don’t really make sense given the context of what education should be about compared to what far too many power-hungry adults think it should be.

What these graphs do not tell us is how much money is being spent per student in different categories.  That is what happens next with this series.  For example, even a category like Student Body Activities can vary widely by charter or district.

I would like to thank a gentleman named Jack Wells for the inspiration behind this article as well as the rest of this series.  This would have never come about, under any circumstances, had it not been for the work he has conducted for years.  Jack is a Red Clay citizen with no children in the district.  But he is very concerned about making sure Red Clay and all Delaware students are getting what our citizens pay for: a good education.  For those who know Jack, he is like a dog without a bone.  He will keep digging and digging until he finds out what is really going on.  No FOIA is immune to Jack, and he will find that last unturned stone.  I am honored to be a part of Jack’s email group where he digs into a lot of this stuff.  Jack Wells and I talk a lot on the side.  Transparency and accountability in our schools are very important to Jack and I.  Not the accountability that comes from high-stakes tests, but financial accountability.  We may not agree on every facet of education funding, but I do know we both believe our state needs to do a hell of a lot more about holding districts and charters under the microscope for how they spend money.

Our State Auditor, Thomas Wagner, seems to have vanished and doesn’t want to answer the questions coming from Jack and I over the past month.  Many are wondering why this is for an elected official who still has more than two years in his term.  What will it take for him to adequately oversee education spending in our state?  There is far too much silence coming from that State Department, and it has me worried about what is going on behind the scenes.  Some people might be panicking.  That’s okay.  Panic away!  If you are doing something wrong, you have cause to be concerned.

Eventually, if I’m still alive, I would like to do the same thing for each school in each district.  But that involves a lot more research than I now have time for!

15 thoughts on “Delaware Education Funding: Which Schools Get The Most Per Student?”