Delaware Secretary of Education Dr. Steven Godowsky has violated a directive issued to him by the law-making body of the State of Delaware, the Delaware General Assembly.

After weeks of hounding certain legislators and Delaware Secretary of Education Dr. Steven Godowsky, I was finally able to obtain the House Resolution #22 report.  It isn’t even a report, it’s just a letter from Godowsky.  Thank you to Delaware State Rep. Joe Miro for stepping up to the plate and getting this to me!  It’s important for parents, schools, districts, teachers, and students to see this.  House Resolution #22 was mandated by the Delaware House of Representatives on 1/14/16 when the House unanimously passed this resolution.  The report was due on May 1st.

What irritates me the most about this letter is that Godowsky didn’t even follow the very easy instructions provided to him in HR #22.  Below is the synopsis of the resolution with certain words bolded for emphasis.

A resolution requiring the Delaware Secretary of Education to propose options for the General Assembly to consider for adoption as Delaware law as it pertains to the decisions by parents to opt their child out of statewide assessments.  The Secretary shall provide options for implementation of a uniform procedure and process by which all schools and school districts within this State notify parents of their right to opt out, along with a standard procedure to accomplish the same.

This joint resolution also prohibits the Department and schools from penalizing any student deciding to opt out. It is intended that such prohibition be incorporated within any legislation adopting a procedure offered by the Secretary.

Instead, what we got from Godowsky was a rehash of the same letters from both the Delaware and United States Departments of Education which indicate what schools and districts have to do in regards to opt out, not parents.  The federal and state laws do not even address parent obligations about opt out.  Someone needs to call out Godowsky for this.  He intentionally did not follow orders directed to him by the House of Representatives.

The resolution gave him a very specific order: provide options for parent opt out, not school or district opt out.  This is willful misconduct on Secretary Godowsky’s part, and he needs to be held accountable.  He refused to do what was required of him by the law-making body of Delaware.  I’m pretty sure the General Assembly is well aware of what is in state code for districts and schools.  After all, they are the ones who create the laws.  I’m also fairly certain they looked into what the federal law states in regards to parental opt out of state assessments.  Which has similar language to Delaware’s laws: they only apply to schools and districts, not parents!

We could have avoided this further nonsense from the Secretary had the General Assembly had a spine on January 14th and passed the override of Governor Markell’s veto of House Bill 50, the opt out bill passed by a majority of the House and Senate over a year ago.  Instead, the vast majority of the House Representatives cowered behind the Governor’s veto and refused to suspend the rules to allow for a vote on the override.  There really is no other explanation for it.  House Bill 50 is completely dead at this point and any opt out legislation would have to start over in the 149th General Assembly, beginning in January.  But as for Dr. Godowsky and his willful defiance against the General Assembly, someone needs to do something about that.  Which legislator (if any) will step up and issue the charge? 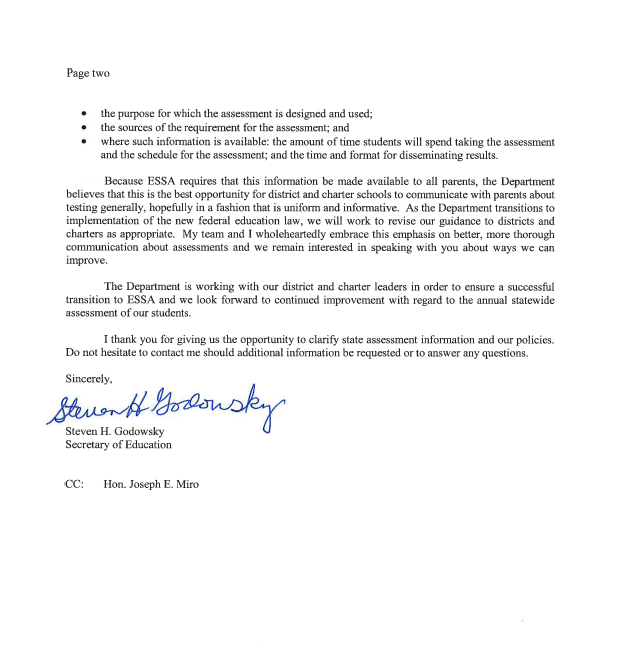