Wow!  I wasn’t expecting this.  And on the same day my baby Ed turns two!  That is awesome.  For those who may not know, my baby Ed was born two years ago.  My baby keeps me very busy.  It gets me up early some mornings and definitely keeps me up late!  Ed’s full name is Exceptional Delaware.  Gotcha!  But I did get the casting announcement exclusively from Gates Media this afternoon.  Whoever came up with some of these actors and actresses to play the players in Delaware education sure did their homework!  I remember about fifteen months ago a whole bunch of us were coming up with who would play us in a movie about the Delaware DOE.  I have to wonder if Director Gates found that Facebook post…

While details on the plot are sketchy, sources are telling me the plot of this movie surrounds a meeting with three school districts, legislators, the Delaware DOE, a couple people from the State Board, some bloggers, board members, some teachers, and more!

Here we go!  The cast of “Delaware DOE: The Movie”

Kevin Spacey is Jack Markell!  Yes, Spacey was bald when he played Lex Luthor in Superman Returns.  And he knows a thing or two about politics with his role in House of Cards.  Who better to play Delaware Governor Jack Markell? 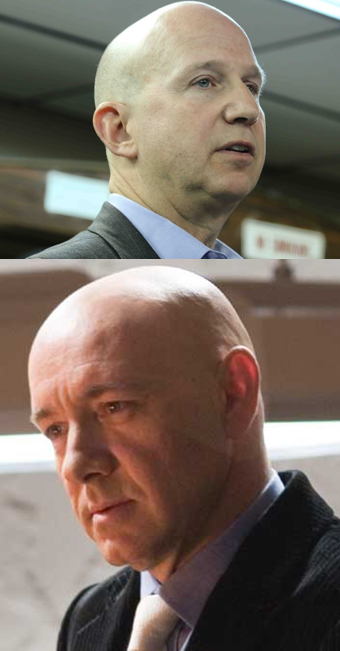 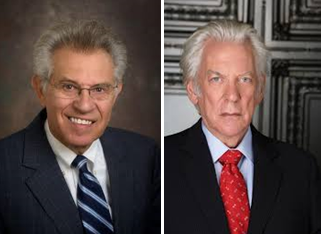 Julia Louis-Drayfus is Donna Johnson!  What?  Elaine from Seinfeld?  The bossy, controlling Elaine?  Playing Donna Johnson?  Say it ain’t so!

Scott William Winters is Chris Ruszkowski!  For those of you asking where you’ve seen that face before, look no further than Good Will Hunting.  Winters played the guy who unsuccessfully hit on Minnie Driver prompting Matt Damon to ask him if he likes apples.  The guy said yeah, and Damon gave his famous line: “Well I got her number, how do you like them apples?” 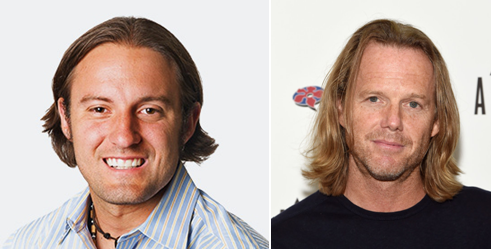 Teri Hatcher is Penny Schwinn!  This was a “priority” role for Hatcher!

Even Mark Murphy shows up in this movie!  Who plays him?  None other than Edward Norton!  We don’t know if Murphy blessed the casting or not.  That dude flew out of Delaware first chance he got! 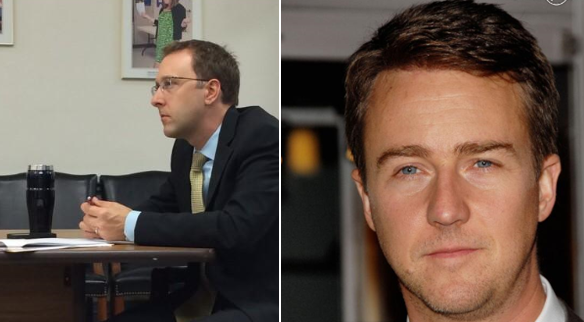 Richard Thomas plays David Blowman!  When asked if he could tackle this role, Thomas said “I played John-Boy Walton.  I got versatility!” 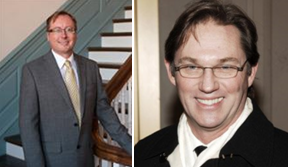 Jeff Goldblum is Arne Duncan!  Why?  Why not!  Arne was very important to Delaware.  He… (sorry, laughing hysterically here), he… he…  Okay, Arne didn’t do anything for Delaware, but I heard he might show up for the movie to hang out with his pal Jack!  Goldblum wasn’t too thrilled playing the former US Secretary of Education.  “How the hell did this guy ever rise to power?”

Sometimes a role just happens an actor is born to play.  Such was the case with John Noble getting the role of Delaware State Board member Pat Heffernan.  Noble played one of the lead characters in the much-missed television show “Fringe”.

Martin Freeman landed the plum role of Delaware Attorney General Matt Denn!  He is very anxious to begin and get things going.  Something Denn can relate to!

Showing a wide range of talent, Jack Nicholson wasn’t sure if there was enough depth to play State Rep. Earl Jaques.  But once he did some reading on him, he jumped at the chance!  He said “I gotta play this guy!”

Sean Astin is very excited to play another Sean!  Landing the role of one of the young guns in the Delaware House of Representatives, Astin said he would go back to Mordor if it meant playing the State Rep! 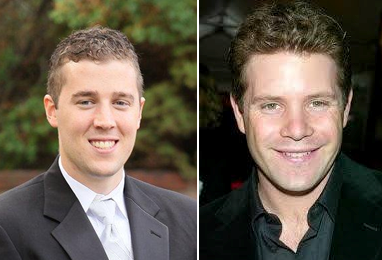 The former lead singer of 10,000 Maniacs, Natalie Merchant, thought it would be terrific to play the esteemed State Rep. Kim Williams!  She said, “It was an honor!” 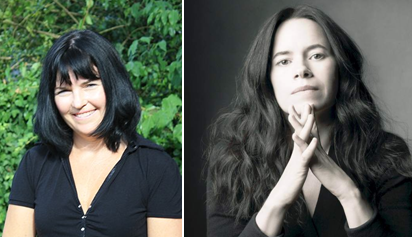 Holy Smokes!  Christopher Lloyd is State Rep. John Kowalko!  When Lloyd saw John’s hair, he flew to the studio and donned his Doc Brown wig for the audition.  The producer said, “Dude, you aren’t auditioning.  You ARE John Kowalko!” 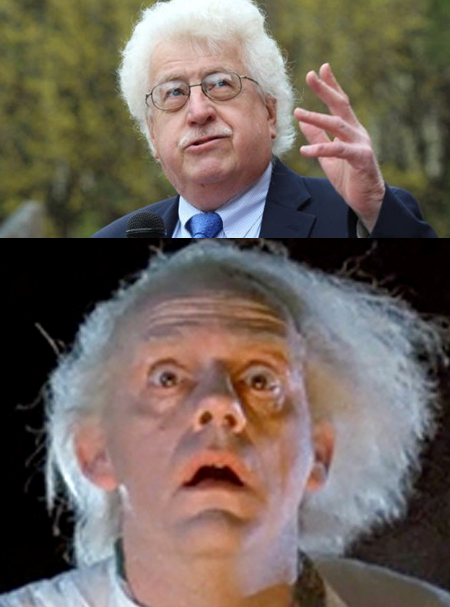 Peter Gallagher, the father from “The O.C.”, saw a picture of Paul Herdman and thought to himself, “There is someone out there that wants to be like me!”  And a legend was born!

Cissy Spasek is Kendall Massett, the Executive Director of the Delaware Charter School Network.  While some might say Spacek and Massett are worlds apart, have you ever seen “Carrie”? 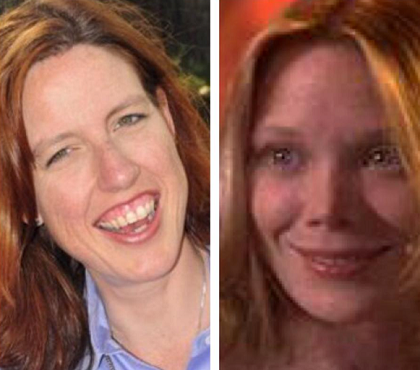 When asked what he knew about the Red Clay Consolidated School District, Victor Garber said he couldn’t recollect hearing anything.  The producers knew Garber was perfect for Red Clay Superintendent Dr. Merv Daugherty! 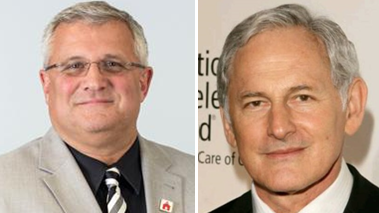 A true challenge was finding someone to play Red Clay Board President Kenny Rivera.  And then Nestor Carbonell, who played Richard on LOST and currently plays Sheriff Romero on Bates Motel, told the producers he could make it work!  Rivera and Carbonell were last seen chatting about their super eyelashes! 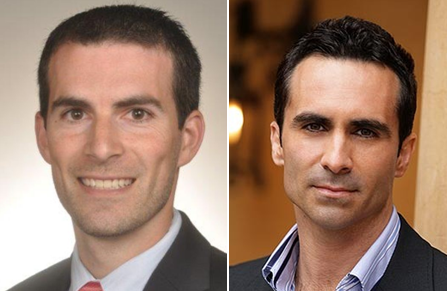 You have to get a goofy guy to play Mike Matthews, but also someone with a tender side as well.  Who better than Ben Stiller?  See below for an even bigger reason why Stiller is perfect for the role of former blogger and current President of the Red Clay Education Association. 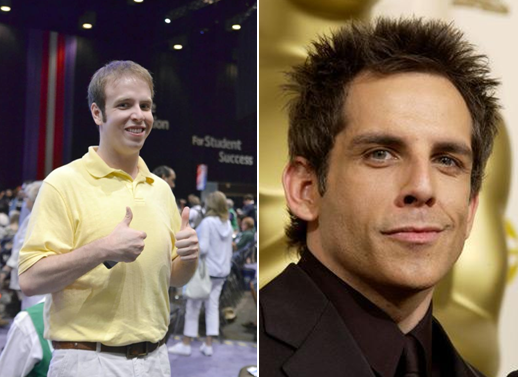 Paul Sorvino is the man “frozen” in time, Acting Superintendent of the Christina School District Robert Andrzejewski!  Sorvino did NOT want to let this one go! 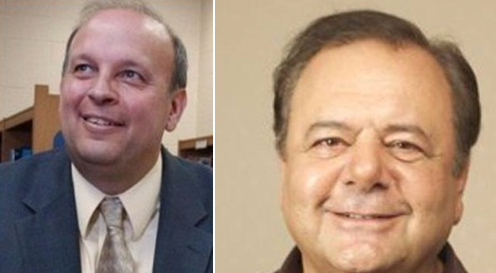 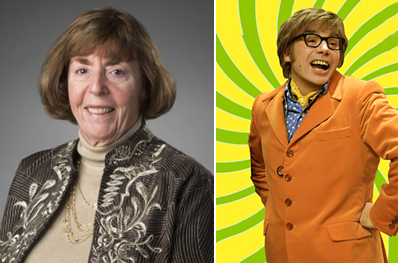 The Cigarette-Smoking Man from the X-Files, William Davis, was perfect for the role of Fred Polaski, the Vice-President of the Christina School Board!

Playing the role of Christina Board member John Young is Peter Griffin.  Yes, Peter is a cartoon.  But this was a personal favor to Young. 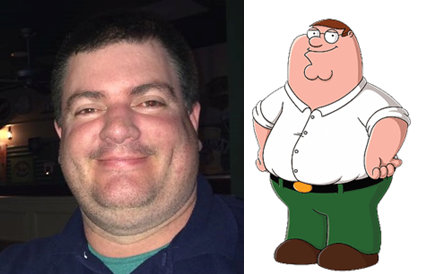 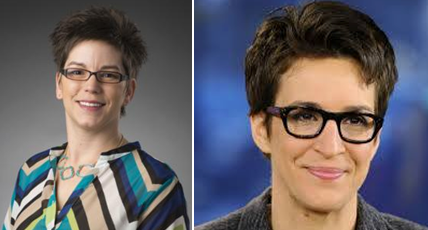 Playing the role of Burger Girl, er, uhm, Christina teacher and VP of the Christina Educator’s Association is Tina Fey!  Tina couldn’t wait to find out what makes Kook tick.  They frequently disappear from the set…

It was VERY hard for the producers to find someone to play Delaware PTA Vice-President for Advocacy Yvonne Johnson.  We had to find the look AND the New York accent.  Someone suggested Blythe Danner.  During production, Danner got a very bad cold, so the producers put out a casting call just for Johnson’s voice.  Yes, they got Fran Drescher to play the voice of Yvonnne Johnson! 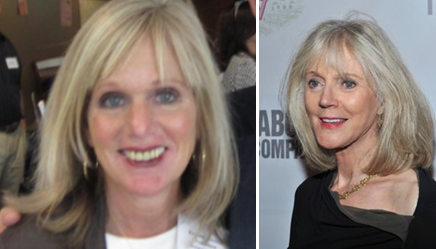 Freeman!  Yes, Morgan Freeman is playing former Christina Superintendent Freeman Williams.  “It is only because he has such a cool name!”

Playing the role of State Rep. Sean Lynn AND Capital Superintendent Dan Shelton is former late-night host Jay Leno.  Wait a minute, Leno is playing TWO characters in the movie?  Look at the picture.  See the transition.  Has anyone ever seen Lynn and Shelton in the same room together?

Ben Affleck did not want to opt out of playing the Capital Board President Matthew Lindell!

Playing the role of US House Representative John Carney is… John Carney.  “We wanted to find someone with the same personality and drive as Carney, but we couldn’t find anyone with THAT level of drive,” one of the producers told me. 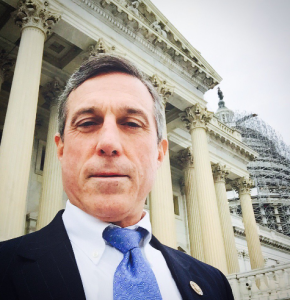 The producers really wanted someone to play New Castle County Vo-Tech Education Association President Danny Rufo.  They had two perfect guys for it too… 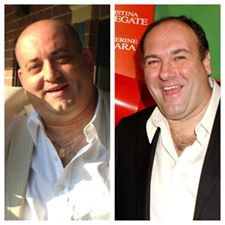 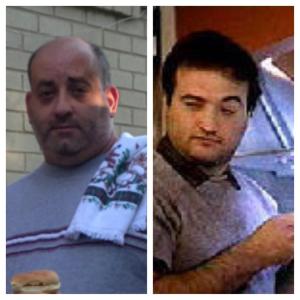 Kate Winslet is Natalie Ganc, the spitfire teacher from the Caesar Rodney School District!  She was bummed Leo wasn’t in the movie, but she thought it was groovy to be in a movie with THE Austin Powers! 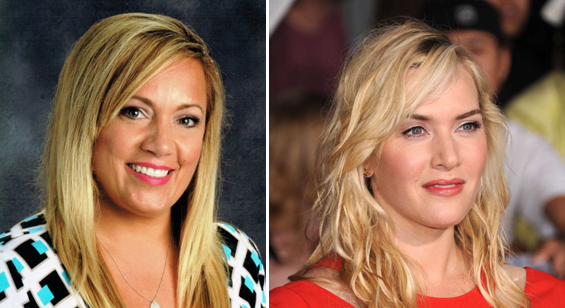 The King of WEIC, Tony Allen, will be played by Djimon Honsou.  When asked if he could play a huge person in the movie, Tony Allen said “Of course I can.  It’s a once in a lifetime opportunity.”  The producer had to remind Tony it was a question for Djimon! 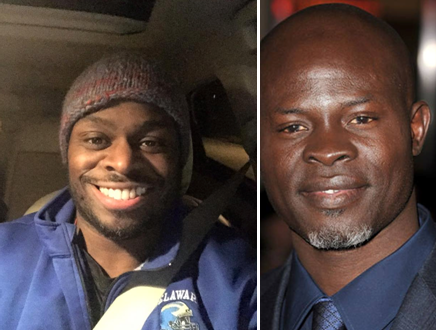 Playing Wilmington’s own Elizabeth “Tizzy” Lockman is Thandie Newton.  Lockman actually wanted Newton to play her.  She announced it on Facebook!

Yes!  Kavips is in the movie!  But since no one knows who the heck he/she is, they had to find someone who is equally enigmatic.  Who better than Vera, Norm’s wife from Cheers!  They never showed her face with the exception of the famous Thanksgiving episode.  But after a food fight, this was all we saw of poor Vera!  Wait a minute… I thought George Glass would have been perfect… 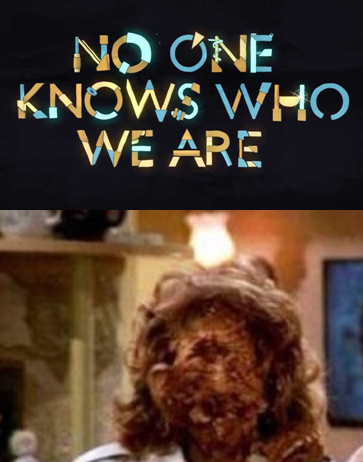 If ever a role was designed for one actor, Kilroy would be it!  Robert DeNiro wanted to play Kilroy very bad.  “I just want to say ‘I gotta a high school diploma and a pocket full of college credits’ on the big screen!

Benedict Cumberpatch is playing the role of, well, me!  I thought, why the heck is a British guy playing a Delaware blogger.  But then I realized, this is the guy who played Sherlock Holmes! 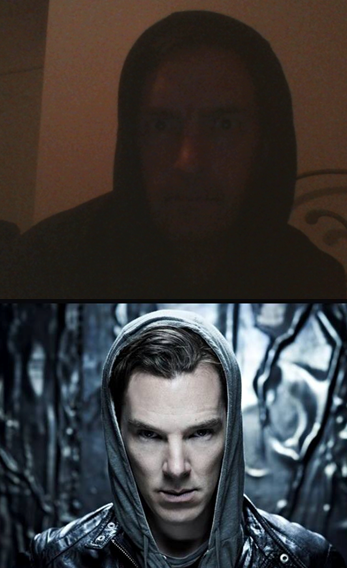 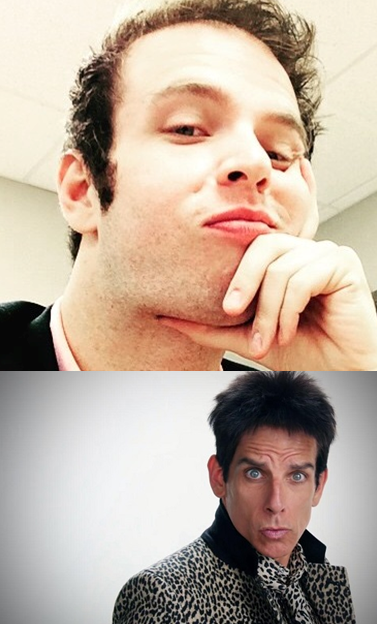 So there you have it, the all-star cast of “Delaware DOE: The Movie”, coming someday to an IMAX theater near you.  We don’t know when the movie will come out, but one fan has been waiting years for this one.  He is hoping the movie ends with all parents taking their kids out of public education and sending them to charter schools.  We “don’t know who he is” but we care a lot!  We are all hoping Publius gets a chance to see the movie before his big move the hell out of Delaware!  Publius wanted to be in the movie, but they couldn’t find anyone who wanted to play him.  After some calls were made and some favors introduced, the producers promised Publius he would get a cameo appearance in the movie… 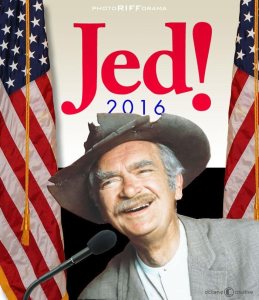 Geddy Lee, the lead singer of Rush, really wanted to be in the movie.  The producers were huge fans, but they had to find a way to make it work.  “Getty doesn’t look ANYONE involved in Delaware education.”  One of the scenes in the movie is a flashback, going back to the college days of State Rep. Trey Paradee.  The producers recognized the magic…