Yvonne Johnson serves as the Vice-President of Advocacy for the Delaware PTA, sits on the board of the National PTA, and in news that most people don’t know is also employed with the Christina School District as the Parent Engagement Coordinator.  The issue with this surrounds transparency.  Nothing has ever been officially announced with Johnson’s hiring in this role.  There is no official name on the Delaware Division of Corporations for Yvonne Johnson as a business.  According to her National PTA profile, Johnson is a self-employed education consultant: 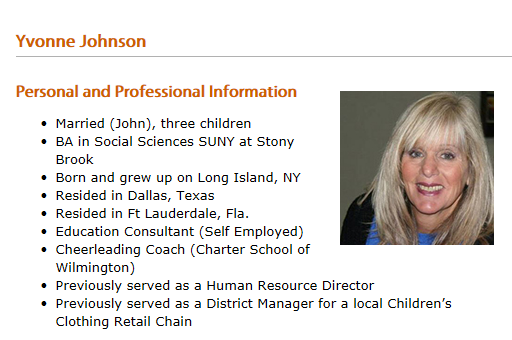 She has also been very involved in several current initiatives with the Christina School District, including their upcoming referendum and the Thurgood Marshall Elementary School.  The Christina referendum is on March 23rd.  As for the elementary school, Johnson is listed as the Christina Parent Engagement Coordinator in an announcement for a meeting at the school on March 1st: 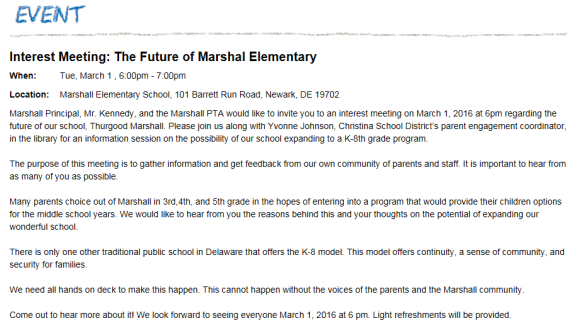 I looked on the Christina School District website, and it seems Christina already has someone else listed as their Family & Community Engagement Supervisor, Whitney Williams.  What is even more interesting is this idea for Thurgood Marshall in turning it into a Kindergarten to 8th grade school.  Quite simply, this is not in the district’s official plans for their upcoming referendum.  The current building for the school would not even be able to house a K-8 program.

As for Johnson’s role in this idea, is it proper for someone to be paid to have parents lobby the school board?  As the next three pictures show, taken from notes and a presentation on the “Marshall Plan”, Johnson has very specific ideas about this idea and the referendum.  Johnson also served as the head of the Referendum Committee for the Red Clay Consolidated School District last year.  Red Clay’s referendum was subject to a lawsuit that has not been decided on as of this date.

We don’t see a Christina School District email address for Johnson, but that makes sense if she is self-employed and has some type of contract with the district.  However, no such contract exists on their website.

This is where we see Yvonne Johnson actively soliciting parents to advocate for the “Marshall Plan” by essentially lobbying the Christina Board of Education.  But the next picture paints an even bigger picture:

We see the line “Get out and vote for the referendum for planning $$”.  Should a paid consultant to the district be advocating for parents to “get out and vote” for increased money for the school district in which she is paid to consult for?  Is this plan even a part of the board-approved referendum?

The referendum does call for planning funds for potential grade reconfiguration in the amount of $100,000.00.  However, the “Marshall Plan” is looking at getting this going in the 2017-2018 school year.  That would require extensive capital costs to reconfigure an existing school that does not have the capacity.  If they shrunk the class sizes, the district does not have the ability to pay for that either.  The upcoming referendum is strictly for operating costs and not capital costs, which would be needed to move the school if necessary.  So my big question would be what in the name of Thurgood Marshall is going on with all of this?  While there is nothing in writing on the district website or in board documents indicating Johnson has a contract, several sources who wished to have their name withheld for this article have indicated Johnson has openly told them she is being paid for her services to the Christina School District.

In my opinion, Johnson’s capacity as serving on several different groups as well as her self-employed advocacy job, the Delaware PTA, the Wilmington Education Improvement Commission, several different Red Clay initiatives, and now her job with Christina, has far too many potential conflicts of interest for her to be issuing fair and impartial judgment on the Wilmington education scene.  As well, her position as a National PTA board member forbids her from advocating for opt-out of standardized testing but she is a consultant with a school district that had their board pass a policy honoring a parent’s right to opt out.

Don’t get me wrong here, I very much want Christina’s referendum to be successful.  I was not happy when their referenda did not pass last year.  But I also believe in full transparency, especially when a school district is asking for trust from their voters.  Trust is a two-way street.  Which means all aspects of school finances, contracts, and vendors need to be visibly apparent for all to see.

On a personal note, Yvonne Johnson is a great advocate.  There aren’t too many people in Delaware who have advocated for students as long as she has.  But the lines get blurry at times when people in Delaware jump on too many trains.  Yes, Delaware is a small state and if we had more parents taking on these kinds of roles, this wouldn’t be an issue.  But for those who do, they must recognize any potential conflicts of interest and act accordingly for the betterment of students.

7 thoughts on “Is There A Conflict Of Interest With A High-Ranking DE PTA Member Involving Christina School District?”