It turns out the Delaware State Auditor’s office is investigating the September 30th Enrollment Counts at certain charter schools in Delaware.  Which ones?  How about ALL OF THEM!!!  Schools were notified in November that the Auditor of Accounts would be coming for a visit.  They started going to the charters the past couple months.  How do I know this?  A few charters actually told me.  But my question would be this: why would the auditor’s office announce they were coming ahead of time?  Isn’t the point of an audit investigation that it takes you by surprise?

“September 30th Procedures.”  The above picture came from Positive Outcomes board minutes from November.  All schools in Delaware are required to submit their enrollment counts on September 30th of each school year.  This determines the unit-based funding for special education children in Delaware.  If ALL the charters under investigation by the auditor, is this for their special education counts or their TOTAL counts?  This could be a VERY interesting report when it comes out!  I went to the state auditor’s website, and I saw NO reports from the last three fiscal years on any type of September 30th count investigation. 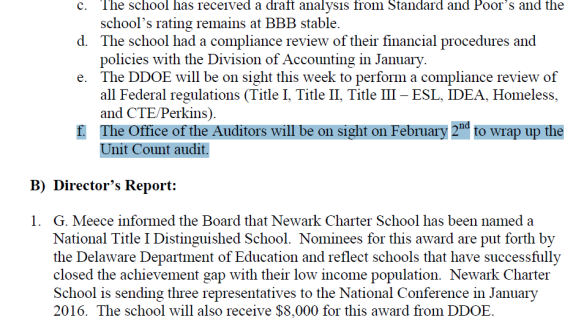 Newark Charter School already had their audit done.  I have to wonder why all of them are being investigated.  I know Delaware Met’s numbers were in some flux for a while there.  But ALL of them?  I would have to imagine if ANY charter school in Delaware is reporting false numbers that would have a huge impact on their funding.  As well, it is the law.  But if they are fudging around with special education numbers…that’s federal as well!  IDEA-B funding comes from federal coffers, and you DON’T want the feds coming after you for that kind of fraud!

5 thoughts on “Which Delaware Charter School Is Under Investigation By The State Auditor Now? How About ALL Of Them!!!!”