This is the minefield of Delaware politics.  Even though the majority of legislators vote yes for suspension of rules all the time on June 30th when they push bills through without the public ever knowing about them, they are going to make a stand now?  Seriously?  General Assembly, I have this to say to you: a vote of no on suspension of rules is the same as a vote of no for the veto override.  At least in my eyes.  Parents don’t care about your parlor games and rules.  They care about their kids.  So get your heads in the game and do the right thing for parents.  Enough.  You are turning all of this into a war, with Markell on one side and the voice of the people on the other.  Just do the right thing here.  If you don’t know what that is, err on the side of your constituents and not a lame-duck Governor who will probably give Delaware students free surf and turf lunches for the rest of the year at the rate he’s going.  He is already seriously on the edge of violating multiple Delaware laws with his latest SAT/SBAC stunt, and you know this.  How much longer are you going to give this Governor the authority to do whatever he pleases?

In the meantime, thank you to Rep. Kowalko for his respect and sincerity with the below letter sent to his colleagues today. 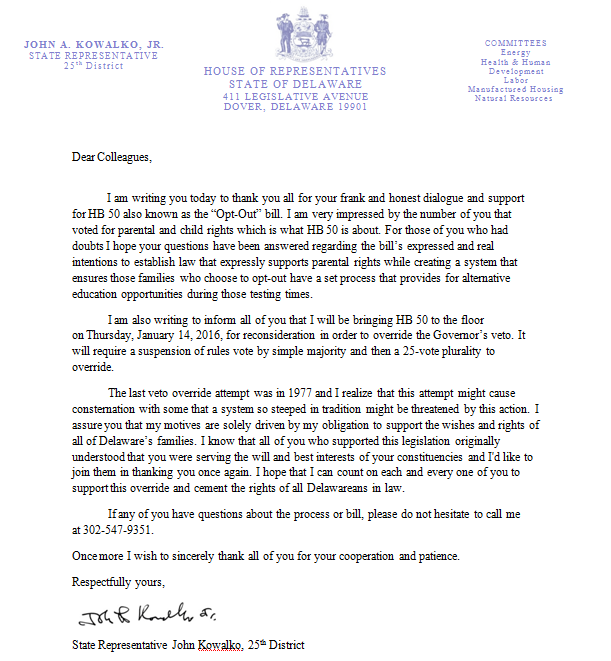 One thought on “Kowalko To Ask For Suspension Of Rules To Override Markell’s Veto Of House Bill 50, This Is The Minefield Legislators Are Stuck In”