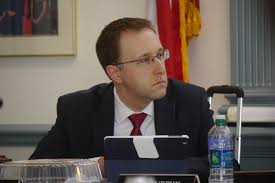 Aside from Governor Markell, the most talked about name in education in 2015 was Delaware Secretary of Education Mark Murphy.  When he took over the position from Lillian Lowery in 2012, there was skepticism.  For three years, we watched Murphy and his minions at the Delaware Department of Education disengage with their stakeholders: teachers, administrators, parents, and students.

When House Bill 50, the opt-out legislation, became a huge topic of conversation, Murphy publicly stated on the Larry Mendte hosted The Delaware Way that parents were not allowed to opt their children out of standardized testing.  I remember after the debate at the Senate Education Committee, a participant who had never seen Murphy before and was not involved in Delaware education, asked me if Murphy was alright, if there was something wrong with him.

In the early part of the summer, it was revealed the Red Clay Consolidated School District was not getting their promised funding for their three priority schools.  As rumors go, this was the final nail in his secretarial coffin.  By the middle of the summer, Murphy announced he was “retiring”.  No reason was given, just that Murphy was going to pursue other opportunities.  Meanwhile, his LinkedIn account still shows him as the Delaware Secretary of Education.  The Race To The Top was over, and so was Mark Murphy.