The news broke tonight and all over the country folks are having a collective gasp and bewilderment at the Washington Supreme Court ruling on charter schools being unconstitutional in Washington.  Could this happen in Delaware?  There are some very strong arguments for this.  Given the nature of referendums in Delaware, and how charter schools get local funding, it could if there was strong support for it.  Do we have that in Delaware? 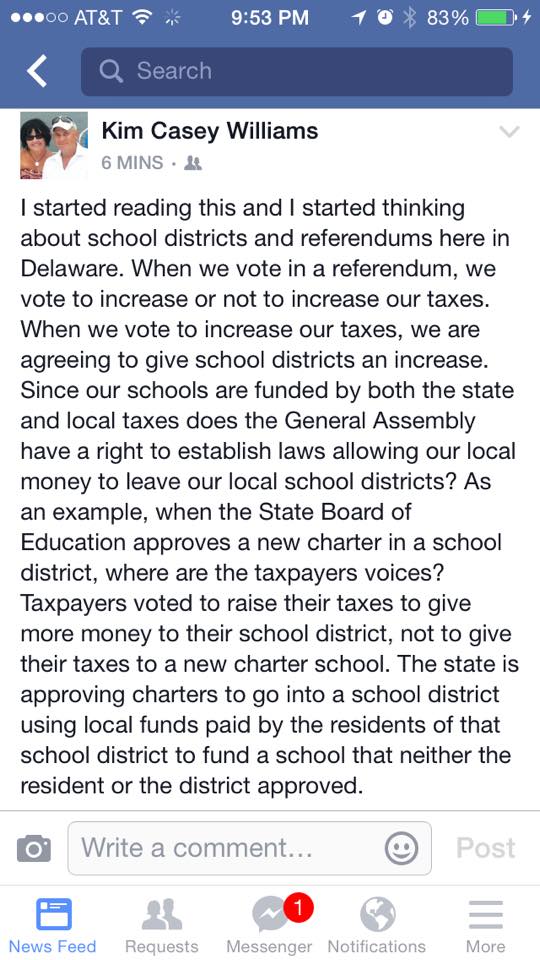 I’ve always felt if charters want to be called public schools than they need to behave like public schools.  I’m not saying they all go against this grain, but enough of them do that it causes huge issues with feeder patterns.  I’m talking about you Charter School of Wilmington, Newark Charter School, Delaware Military Academy and Sussex Academy.  But even more than that, the funding issues with Delaware charters cause more problems than they are worth.  Christina School District is definitely feeling the brunt of this right now, but what happens once the charter moratorium is lifted and more begin to open up across the state?  I just heard today that First State Montessori is looking to open a second charter in Sussex County.  And what about when schools like Family Foundations Academy get modifications approved to increase their enrollment?  MOT Charter School just opened a high school in Middletown/Odessa and that will surely affect enrollment in the Appoquinimink School District.

The way charters are funded in Delaware just doesn’t work.  There is only so much money to spread around, and funds getting squeezed out of the traditional school districts isn’t working.  It is creating chaos, and this will only increase.  Vo-techs are funded by line item on the budget.  Why aren’t we doing this with charter schools?

The political capital to do away with charters as public schools does not exist in Delaware right now.  There is far too much public support for them.  Some key differences between Washington and Delaware spotlight this.  Washington just began their journey with charters in the past few years.  Delaware’s began twenty years ago.  Teachers are allowed to strike in Washington (as they are doing in Seattle right now) and Delaware’s can not.  Despite Bill Gates coming from Washington, this state sure knows how to challenge the reformers in Education.  Between high opt-out numbers, dropping out of Common Core, and now this, they are the state to watch!

7 thoughts on “Washington Supreme Court Ruling On Charters Not Being Public Schools: Could This Happen In Delaware?”