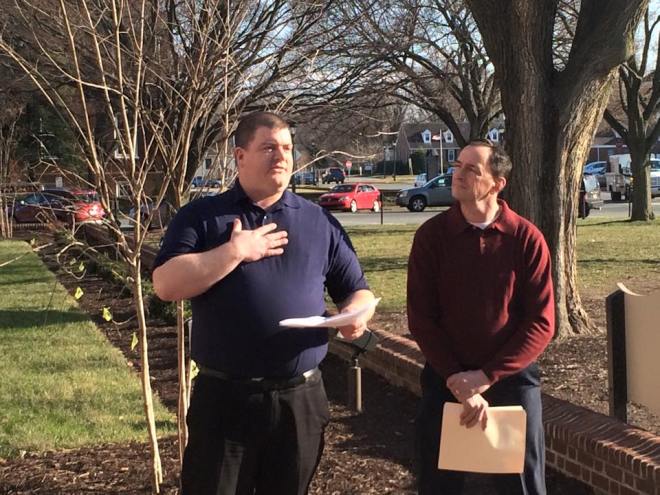 The Parent Press Conference on Delaware Education today went amazingly well!  About 25-30 parents came out, and many of the major Delaware media outlets were on hand as well.  Some parents from up north were unable to make it do a very nasty stomach bug making it’s appearance up there, but there were many familiar and unfamiliar faces there.  I gave an opening speech:

Thank you all for coming out today. My name is Kevin Ohlandt, and I am a proud father of a wonderful 5th grader in the Capital School District. I would like to recognize Delaware State Rep. John Kowalko and Delaware Senator Dave Lawson from the 148th General Assembly for joining us. As well we have State Rep. Kim Williams in the audience today. Both John and Dave are the co-sponsors on House Bill 50, which is the parent opt out bill. This legislation would codfify the parental right to opt out of the state standardized assessment, which is currently the Smarter Balanced Assessment. In the details of the bill, no student would be penalized for being opted out, and the student’s opt out data would not become a part of the school’s accountability ratings.

Since this bill was first announced, other legislators have made comments such as “This bill will never pass” or the Smarter Balanced Assessment is just a “little test”. When the opt out movement in Delaware began in earnest earlier last month, many parents were frightened or intimidated by certain school districts in our state. They received letters and emails from districts which included the following types of language:

-“Only students who have an extreme medical condition or a mental health can concern may be precluded from taking the assessment.”

-Making parents sign a waiver indicating “Despite this legal requirement for state testing, I elect NOT to have my child tested for the 2014-2015 school year and that my child will be counted as “absent” for purposes of testing.”

-A superintendent saying “I’m the only one who can say who does not have to take the test.”

The reason much of this confusion began in the first place started with the Delaware Department of Education. In early December, they issued suggested guidance to school districts to handle the issue of parent opt out. This included having schools issue letters to parents indicating details regarding the Delaware state code and the state assessment. For three months, they watched school districts cite this code and knew it did not include parents in this part of the law. Parents felt intimidated and bullied by schools and the DOE let it happen. It wasn’t until the Delaware PTA had town halls concerning opt out that the Delaware DOE was forced to admit they can’t do anything to stop parent opt out. They said as a state they can’t legally do anything and it is up to the districts. There is no consistency among the districts in Delaware. Some have complied with parents in their requests, and some have flat-out said no, and that their child will test. I have seen an email where one director of curriculum stated he was afraid too many of the “smart” kids would opt out which would affect the school’s rating. As well, threats of Federal funding cuts to our schools are unsubstantiated based on other states not meeting the mandatory 95% threshold for testing participation in each sub-group. Over 40 schools in New Jersey did not meet these guidelines last year and not one single school received any cuts in funding. END_OF_DOCUMENT_TOKEN_TO_BE_REPLACED

The Delaware State Educators Association has just issued a press release indicating they support parent opt out and want the State of Delaware to take a hard and thorough look  at the over reliance on standardized testing.

1) Was the Smarter Balanced Assessment hard for you?

c) No, but I just put whatever answer I wanted to

d) No, my parents said if I don’t pass I couldn’t go to Firefly

2) What do you think of Governor Markell?

b) He came to my school once, but he only talked to the smart kids

c) My dad said he is evil

3) If you could change one thing about the Smarter test, what would it be

a) Only hipsters call it Smarter

b) The whole thing

d) I would make it mandatory for all principals, superintendents and legislators

4) What do you think about the Delaware DOE?

a) Is this a trick question?

b) Is that the state deer?

c) A bunch of hipsters run that place!

d) They made me learn nothing for two months cause of the Smarter Balanced Assessment.  I come to school to learn, not to be tested.

5) Do you wish your parents opted you out of taking the Smarter test?

a) No, cause my Mom works for the DOE and that would have made waves

b) No, cause then I couldn’t have written about my latest Minecraft game on the global warming essay

c) Yes, all my friends got to watch the Avengers while I was stuck in here!

d) My parents could have opted me out?  This is war!

b) I’m a failure just like Earl Jaques said all the opt out kids would be, not fair!

Okay, if New York City can allow opt out, there is absolutely no reason why little old Delaware can’t. Wake up Delaware!

Parent groups in NYC are warning that some principals are threatening and misinforming parents.

“New York City – Parents across the city are refusing to let their children take the annual state English Language Arts (ELA) and math tests administered to third through eighth graders, but some principals are standing in their way. Warning that opting out of the tests is either not allowed or will result in negative consequences – for the student, teachers or school – principals have left parents frustrated, fearful and confused about their rights. Although a parent guide released by the Department of Education (DOE) states, “If, after consulting with the principal, the parents still want to opt their child out of the exams, the principal should respect the parents’ decision and let them know that the school will work to the best of their ability to provide the child with…