What do I think of Secretary of Education Mark Murphy?  This question of me in a sidebar conversation by the famous Delaware blogger, Kilroy, of Kilroy’s Delaware fame.  This is a pretty loaded question, because I have several opinions.

Personally, I don’t know the man.  Nor would I want to.  We don’t travel in the same circles, and for better or worse (go with the latter), he is the executive director of my son’s education in Delaware.  With that being said…

He is extremely incompetent.  I’ve been to a few Delaware Board of Education meetings, and when he talks, I want to laugh.  For the most part, he plays up the parts of education that I abhor the most.  Charter Schools, Common Core and the Smarter Balanced Assessment are his babies, and when he talks about them, it’s like watching a kid play on Xbox for the first time.  The glee, the sickening joy in his eyes, the elfish smile on his face…

I have seen him get upset once at a Board of Ed meeting.  That was the last one, when the results of the Delaware teacher effectiveness ratings came out.  And no Delaware teachers were rated ineffective.  0%!  Man, did that piss off Murphy!  He looked like someone took away that Xbox!  He was visibly angry, and it was obvious he was going to have none of that!

I view his climb to the top of education in our state with shock and no awe.  Everyone continues this sentence with “He started out as a gym teacher.”  And that isn’t true.  Before that, he worked at a residential treatment center.  I have no idea which one, or what he did there.  These treatment centers are where students with disabilities get sent when the school and the home have run out of options.  I would think Murphy would have a pretty good understanding of what these students need if he decided to work at one.  I couldn’t be more wrong.

What has become of special education under Murphy’s watch is a nightmare of epic proportions.  What he has done to education in general is even worse.  He is Governor Jack Markell’s golden boy to implement whatever Jack wants.  And as a result, Murphy has become a charter loving Common Core high-stakes test worshipping special education hating maniac.  But when the going gets tough, like yesterday at the big meeting between the DOE and the superintendents of the low-income priority schools, Murphy was nowhere to be found.  He’s the Secretary of friggin’ Education for the state and he was a no-show!  What could be more important than this meeting?  As I commented on Kavips blog, maybe he got confused between priority and priory schools!  When I see him at Board meetings, he rarely speaks.  He’s constantly looking at what appears to be a cell phone and adjusting his glasses.  It looks like the last place he wants to be.

Under Murphy’s watch, we have seen Common Core suck the life out of teachers, students and parents.  We’ve seen special education go from something halfway between okay and sucks to really sucks. We’ve seen charter school applications increase rapidly.  We’ve seen half of Delaware’s race to the top money get kept by the Delaware DOE.  We’ve seen the first sign of the Apocalypse, the Smarter Balanced Assessment.  We’ve seen him hire 29 year olds to become the new Chief Of Accountability for the DOE.  We’ve seen a non-elected state Board of Education do nothing that would contradict Murphy or Jack.  We’ve seen him support the destruction of the public school system by getting jacked-up legislation passed that will judge teachers on how a student tests one time a year on The Clockwork Orange Smarter Balanced Test.  We’ve seen him not give appropriate funding to schools who need it the most and then support the utter insanity of having the state take those schools back to turn them into charter schools.  We’ve seen him support breaking up teacher’s unions by coming out with a Memorandum Of Understanding to two school districts that appears to be plagiarized from other states’ similar edicts (Thanks for that one JY!).  We’ve seen tens of millions of dollars go out of state to residential treatment centers because Murphy can’t run the ball on special education right and God knows what else he has cooking with that!  We’ve seen him bow to the “masters of education” in Rodel and the Vision year crap, which are just more fronts for the Common Core agenda.

So do I have a high opinion of the guy?  Hell no!  If I could sum it up in a few sentences, it would be this.  You have only one pair of shoes.  You step in gum.  The gum won’t get off your shoe no matter how hard you try.  It annoys the hell out of you, and it affects you every time you put your damn shoes on.  And you can’t buy new shoes, so you are stuck with this crap on your shoes, all the time.  Mark Murphy is the gum on my shoe that just won’t go away.  And he has played this role for every public school student, teacher and parent. 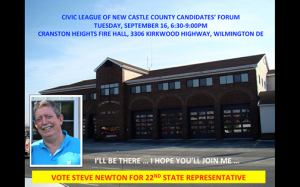 God I wish I lived in the 22nd district in Delaware!  This is the home of Steve Newton, and he is running for House Representative for his district as an Independent.  I could care less what party he is with, because he is a great guy!  If there is one voice in this election cycle that represents the best views on education, Steve Newton is the one!  And he also has a great handle on many of the other ailments Delaware is facing.  Transportation, financial matters, he’s got it covered!

I’ve known Steve for about four months, but I didn’t officially meet him until a couple weeks ago.  We met for lunch, and talked about special education in Delaware.  That night I attended the primary candidate forum up in Pike’s Creek, and watched as the three other candidates kept saying “I agree with Steve”.  The  first time I heard of Steve was on Kilroy’s Delaware.  He commented on a story I was writing on there, and what impressed me the most was how much he helped a friend of mine, who was also commenting.  Nobody knew the connection at the time, but her response was “We need more Steve Newton’s in the world.”  The fact that Steve could touch someone who doesn’t even live in Delaware is just one example of how his knowledge and experience can truly help the people of the 1st state!

Delaware needs a fresh new voice in Legislative Hall.  One that isn’t tainted by all the Markell years.  One that believes education needs to be returned to the school districts and special education needs to be massively revamped in this state.  What makes Steve even more awesome is he is also an advocate for parents who are having difficulty at IEP meetings.  He has helped children in many states across our country.

So to my readers in the 22nd District, vote for a person who will help to make education better.  Don’t vote for the same old guy you always have.  Vote for Steve Newton!

To find out more about Steve’s views, check out his Facebook page, Steve Newton for 22nd District State Representative: https://www.facebook.com/Newtonfor22ndStateRep

What is the most horrifying thing you have every seen?  What is the one thing that makes your hair stand and brings tears to your eyes when you picture it every day since?  For me that was hearing a child scream in horror while two adults sat there and did nothing.

One year ago today, I saw my son in the worst emotional state I have ever seen him in.  I should let go of it, and forget.  But I can’t.  That one moment has defined me and shaped me into the person I am today.  I don’t know which was worse, seeing my son like that, or watching one of the adults casually sit there eating a sandwich and doing nothing.

It was at my son’s old school.  Not the public system he is in now.  The other one.  When he got in trouble for dropping a fucking cookie in the cafeteria, and adults made him out to be Hitler reincarnated.  Which culminated in him running to the end of a hall and hiding between a very narrow space between a locker and the wall.  When the two adults found him, he began to scream he began to scream that he wanted to get out.  This screaming went on for half an hour while they sat there…doing nothing.  For me, the screaming has gone on for a year.

It wasn’t until I found him that he came out.  And the two adults, just sitting there, as if they didn’t have a care in the world.  What makes two people be so cold and indifferent?  What makes them think a child’s immediate needs aren’t important?  How can you be so emotionally unattached to pain and suffering?  In my opinion, this is the worst form of child abuse ever.

That is why I’m here, because my son’s screaming continues.  That’s why when people tell me the DOE really does care, that they have our children’s best interests at heart, I don’t buy it for one second.  They have fostered the environment that allows this to happen.  The more I dig, the more I find.  So many of them are just as bad as those two adults a year ago today.  They sit there, and quantify and analyze, while children across the state are suffering, because they care more about a jacked-up curriculum and a test that won’t even be out for another seven months.

I see the adults that do care.  They are real, and they want change as well.  But those in power won’t listen.  I’ve often wondered what part of your soul you have to sell to become like that.  Why is the game more important than the reality?  Is it about money?  Power?  Standing?

To this day, I can’t understand it.  I guess I just wasn’t raised to become an adult that doesn’t care.  If I see something wrong, I will do whatever I can to weed it out and expose it.  And guess what, I may be very focused on this goal.  But I still have my soul and I’m not ashamed.