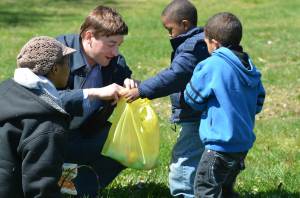 Senator Bryan Townsend is running again for Senator of the 11th District in Delaware.  Primary day is tomorrow, and Senator Townsend deserves your vote.  What I am most impressed about him is that he took the Smarter Balanced Assessment and hated it!  As well, he voted no twice on House Bill 334, which was voted down, and then voted on again when Jack sent the team in to say too bad, so sad, it’s gonna happen anyways.  Townsend stuck to his guns, and voted no again!

When chartermania occurred in Delaware last April, Townsend, along with Kim Williams and others, stood up for public schools and wrote the DOE about what kind of impact this could have on public school districts.  Not that the DOE cared, but we need more Townsend’s willing to challenge the DOE and their love affair with all things charter and testing.  Townsend cares about students, and is willing to fight for what he believes in.  Because of redistricting, Townsend has to run again for his Senate seat, after only two years in office.  Give Senator Townsend four more years District 11!

Being a citizen of Dover, why should I care what goes on in the 11th District?  Because every vote in Legislative Hall counts, and I will support anyone who wants to be the voice of reason in an administration that is turning education into the laughing stock of the world.

From Kavips: Bryan Townsend is Delaware parent’s best defender in the Senate. He is the only Senator to have enough concern over this test to take the Smarter Balanced Assessment, was appalled (as were we). and who became one of only two Democrats to go against the threats of their Governor and his whips in the Senate and vote no on HB 334, both times…..  Against this giant, Dave Tackett is just another politician.  Bryan is the centerpiece of reason in Delaware right now.

From Alan Fox on Delawareway.BlogSpot.com: I am writing to express my enthusiastic support for Bryan Townsend, a former student of mine at the University of Delaware, and a terrific young man who is seeking re-election to the 11th District State Senate seat. Though he has been an incredibly effec­tive and active legislator, who has quickly earned the respect and credibility of his peers, he faces a chal­lenger in the upcoming Democratic primary, and I urge all eligible voters to support this conscientious and hard-working senator at the polls in September.